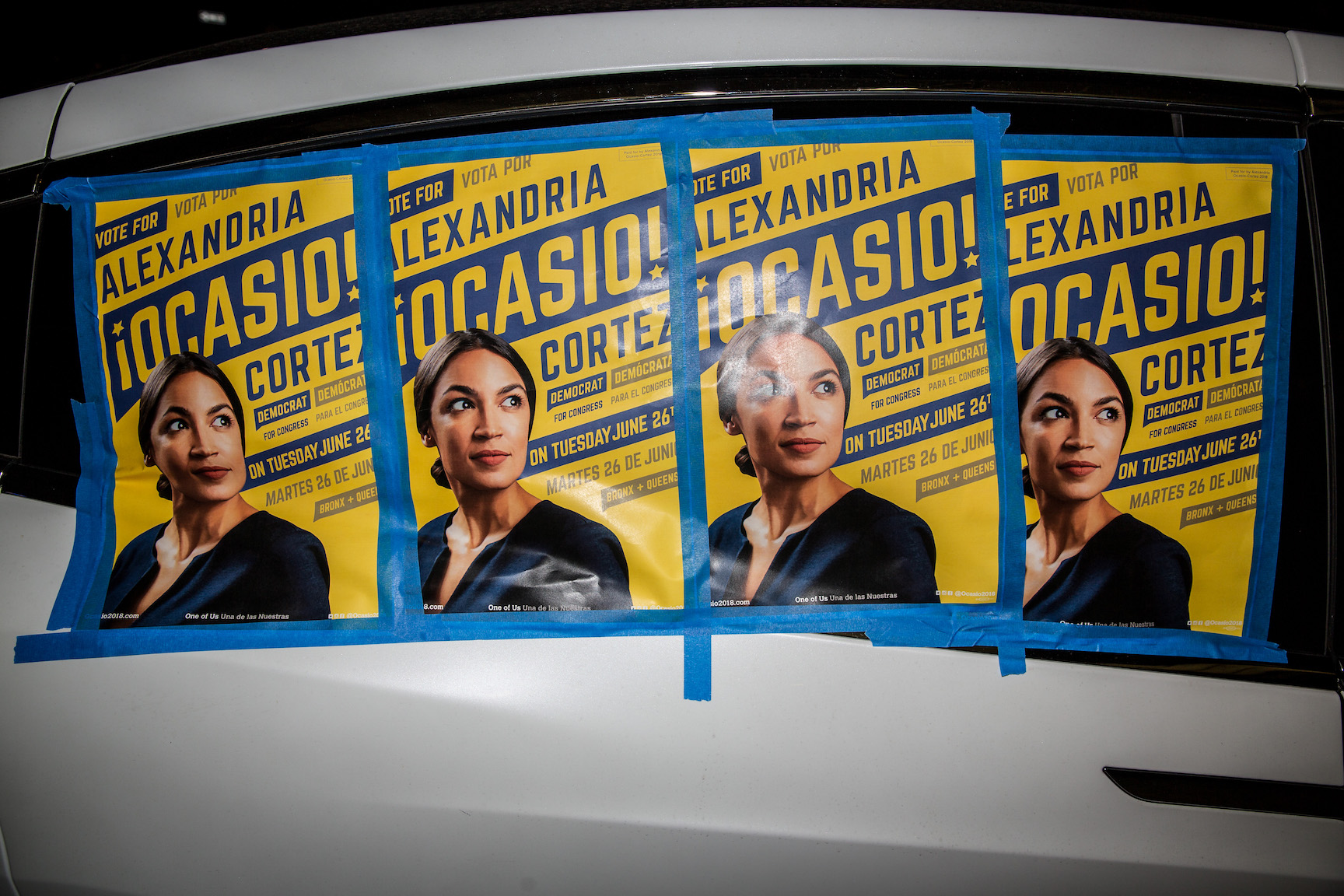 Alexandria Ocasio-Cortez’s recent defeat of ten-term Democratic Party establishment insider, Joseph Crowley in the New York Democratic primary for the 14th district is a welcome sliver of good news in these otherwise trying Trumpian times. Ocasio-Cortez’s June 26 win is a stunning victory against a seemingly invulnerable Democratic apparatchik who has long been eyed as a potential speaker of the house.

The 28-year-old Latina, a self-described democratic socialist and member of the Democratic Socialists of America (DSA), sailed to victory on a Bernie Sanders-inspired platform of free college tuition, universal health care, and, perhaps most boldly, calling for the abolition of the renegade police agency, Immigration and Customs Enforcement (ICE).

Much has already been written about Ocasio-Cortez since her primary win. (She is all but assured victory in the general election this November.)

Socialism is Back, Baby!

For the first time in my life we are witnessing the emergence of a potential socialist movement. Sen. Sanders deserves credit for solidifying it, but the early incubations were apparent during Occupy Wall Street in 2011, which was primarily driven by a nascent anti-capitalist sentiment.

Young Americans, in particular, are more open to socialism and socialist ideas than at any other time since the early part of the 20th century. A recent poll finds a majority of Americans under the age of 30 reject capitalism. A YouGov poll from November 2017 found 44 percent of millennials would prefer living in a socialist country over a capitalist one. Since Trump’s election, socialist groups like the DSA have seen an immense surge in membership and meeting attendance.

And it does not take an advanced degree in sociology to understand why working-class people are turning to socialism and the ideas of Karl Marx and Frederick Engels to better understand the world. As Paul D’Amato writes in the introduction to his 2014 socialism primer, The Meaning of Marxism:

[N]eoliberalism has lost its luster. Nobody believes anymore that a rising tide of corporate profits lifts all boats. More and more people are acutely aware of the fact that the wealth at the top comes at the expense of the labor and health of the vast majority. In spite of decades of media pundits and politicians telling us that we are to blame for our poverty, low wages, and lack of social opportunities, more and more people understand that the system is set up deliberately to benefit a tiny minority.

How these newly radicalized young people define “socialism” is another matter. Ocasio-Cortez’s own admittedly bland and generic conception of socialism is a little too vague and moralistic for my taste. (Then again, Ocasio-Cortez is a politician, and her wide-net definition of socialism may well be intentional.)

Some have argued, likewise, that Sanders is really more of a New Deal Democrat than a socialist. Indeed, Sanders’ hawkish foreign policy positions are quite at odds with those of his avowed hero, Eugene Debs — who famously went to prison in 1918 for speaking out against the first world war.

Still, a political tradition as old as socialism is bound to have developed a variety of strains, divisions, and sub-genres throughout its existence. Even within a room of 100 DSA members, one is unlikely to find a common understanding of the term “socialism.” While socialists of all stripes should definitely engage in comradely yet forthright debates over what sort of world we are fighting for, we must not become too sectarian or even “ultra-leftist” over who can and cannot call herself a “socialist.”

For the time being, I would propose that if you believe in workers’ rights, universal health care, ending poverty and you oppose the oppression of women, people of color, LGBTQ folks, immigrants, and other marginalized groups, then we are on the same side and you are welcome among socialists.

Class Struggle Still Gets the Goods.

While the out of touch, know-nothing punditocracy puzzles cluelessly over Ocasio-Cortez’s surprise upset, her win is no mystery to the working-class voters of New York’s racially diverse 14th district. Like Sanders in 2016, Ocasio-Cortez spoke to working-class voters’ actual lived experiences. Unlike Crowley and the rest of the Democratic elite, Ocasio-Cortez understands working people’s struggles with unaffordable health care, skyrocketing rents, and jobs that do not pay a living wage or offer paid sick days.

As Ocasio-Cortez states flat-out in her authentic campaign advertisement, “Women like me aren’t supposed to run for office. I wasn’t born to a wealthy or powerful family.”

Perhaps most refreshing is Ocasio-Cortez’s refusal to play into the prevailing concept of so-called “identity politics,” in which race and class are constantly pitted against one another. “I can’t name a single issue with roots in race that doesn’t have economic implications,” she said in an interview with The Nation magazine, “and I cannot think of a single economic issue that doesn’t have racial implications. The idea that we have to separate them out and choose one is a con.”

But we are not dealing with rocket science, here. Ocasio-Cortez won because she spoke directly yet eloquently to working-class voters about the issues that affect them. In contrast to Crowley who, like Hillary Clinton two years ago, merely ran on his tenure and supposed “expertise,” — his pragmatic ability to “get stuff done” — Ocasio-Cortez had a clear, tangible message that resonated with voters. As one Sanders campaign sign aptly put it: “Finally, a reason to vote.”

But the Democratic Party still refuses to learn this rather elementary lesson (i.e. that class struggle gets the goods). This brings us to my third and final observation:

“Taking Over” the Democratic Party is a Pipe Dream.

The question over the left’s relationship to the capitalist, Wall Street-captive Democratic Party will become a central one as the working class continues to organize. Activists are already feeling intense pressure to muzzle their “radical” calls for abolishing ICE and instituting Medicare for all and obsequiously fall in line and vote for local Democrats in this fall’s midterm elections. That pressure is only going to increase as the 2020 presidential election looms closer and the left’s primary impetus becomes defeating Trump — even if that means electing a pro-business, corporate shill like Joe Biden, Kamala Harris or, yes, Hillary Clinton.

The fact is, the left has been attempting to “take over” or “take back” the Democratic Party for decades. Progressive candidates like Jesse Jackson, George McGovern, Dennis Kucinich and, more recently, Bernie Sanders, have waged spirited, inspiring campaigns to try to “push” the party into a more radical direction.

But not only has the Democratic Party apparatus swiftly shut down all of those campaigns — it has succeeded each time in absorbing the campaigns back into the “proper channels,” of Establishment politics. This is precisely what happened to Sanders’ campaign in 2016. The Vermont senator set out to spark a “political revolution,” only to end up endorsing and campaigning for — and rigorously shutting down left-wing opposition to — Clinton.

Therein lies Ocasio-Cortez’s dilemma. She has signed on with a party that is fundamentally opposed to everything she stands for. Indeed, the Democratic National Committee (DNC) is already hard at work re-writing the party’s national campaign platform in order to make it harder for self-identified “democratic socialists” like Ocasio-Cortez and Sanders to run for office on the Democratic ticket.

The working class needs its own political party — one completely independent of the two capitalist parties. There was a time when I believed the Green Party could serve this role. But the Green Party in Portland has all but imploded, due to its lack of party discipline and chaotic, anarcho-liberal orientation. Thus, a viable working-class party does not yet exist. It is up to us to create one.

None of this is meant to detract from Ocasio-Cortez’s inspiring primary win. Going forward, she and her supporters should use their influence to steer debates and legislation within the halls of power. But we must understand that Ocasio-Cortez’s victory within a party completely hostile to her entire progressive platform comes with certain built-in limitations.

The many efforts of the inside-outside strategy [as it is known] … have not pushed the Democratic Party in a liberal direction. All liberal intra-party challenges, from Jackson’s to Kucinich’s, ended with their leaders delivering their supporters over to the more conservative Democrats against whom they had mounted their challenges in the first place.

… The real impact of these inside-outside challenges is, to paraphrase Jackson, to “keep hope alive” in the Democratic Party. These campaigns help to extinguish third-party movements. For those who want to build a genuine and credible left in the United States, there is no substitute for the slow and painstaking work of building movements on the ground, and of building a political alternative to the Democrats.