The Empire Triumphant: On Mass Culture and Star Wars 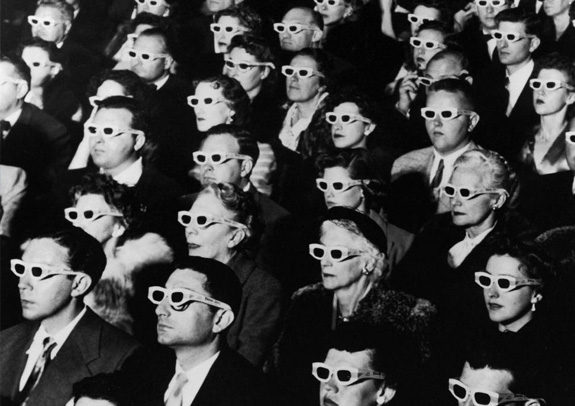 An entranced audience adorns the cover of Guy Debord’s “Society of the Spectacle.”

What would we do without local NPR-affiliate, the Maine Public Broadcasting Network (MPBN), to keep us informed of the pertinent news and information that is truly relevant to our lives?

Consider, for example, a recent episode of the MPBN noontime call-in show, Maine Calling, which tackled the “cultural significance” of Star Wars, in anticipation of the latest installment, The Force Awakens.

Under the broad show topic of “Film and Culture,” Maine Calling host Jennifer Rooks and her film-expert guests—April Strickland, a Colby professor of Cultural Anthropology, and A.V. Club writer, Dennis Perkins—spend the hour waxing philosophically about the alleged cultural themes and values of the Star Wars films.

Strickland, who teaches courses on Star Wars, gushes about the films’ “rich cultural world,” with their “different worlds and different peoples.”

“It [the first film] becomes such an interesting text to study,” she says, invoking academics’ annoying enchantment with so-called “textual analysis.”

Rooks, likewise, points to an excerpt from a recent Dallas Morning News op-ed in which author Charles Camosy, a Fordham ethics professor, credits the original Star Wars film with teaching him many valuable life lessons, including the “interconnectedness and power of all living things.”

“I also learned that Empires are bad,” Camosy adds.

And here I always considered Star Wars little more than a glorified Western in space. Clearly the films’ underlying philosophical themes and subtext have gone right over my head.

I’ll be honest: I have always been a bigger fan of Star Trek than Star Wars. (Star Trek, after all, is actual science-fiction. George Lucas’ franchise is fantasy disguised as science-fiction.)

But frankly, I am not sure either series warrants the amount of boundless exaltation, let alone superficial study as critics, academics, and journalists have devoted to them. Both series are entertainment. They are designed for the same purpose as all popular movies and TV shows: To make money.

Star Trek—the first two iterations, at least—may be “smarter,” entertainment, with episodes that frequently probed the weightier concerns of science, alien civilizations, and the human condition. But it is commercial entertainment, nonetheless—a fact reinforced by Hollywood’s recent resurrection and modernization of the 50-year-old sci-fi franchise. And the new Trek films are directed by the same person, J.J. Abrams, helming the new Star Wars, no less.

There used to be a time when academics and leftist thinkers could see through the blatant commercial aims of so-called mass culture. Post-World War II radical thinkers like Theodor Adorno and Dwight Macdonald viewed the then-emerging popular culture (in the form of television, radio, film, and rock n’ roll) with great suspicion—even scorn.

Macdonald made no attempt to conceal his disdain for mass culture. In his famous 1960 essay “Masscult and Midcult,” he argued mass culture is “not just unsuccessful art. It is non-art. It is even anti-art.”

“Masscult [or mass culture] offers its customers neither an emotional catharsis nor an aesthetic experience, for these demand effort,” Macdonald writes. “The production line grinds out a uniform product whose humble aim is not even entertainment, for this too implies life and hence effort, but merely distraction. It may be stimulating or narcotic, but it must be easy to assimilate. It asks nothing of its audience… And it gives nothing.”

Writers like Macdonald feared the potential of the new media, particularly television, to distract and pacify citizens from pressing social, political, and environmental issues. He and his peers on the left perceived a society not of citizens but perpetual consumers, with little to no interest in civic engagement, let alone radical activism.

Turns out we are all living in the bleak, anti-intellectual dystopian depicted in Aldous Huxley’s Brave New World–and not, as is commonly suggested, George Orwell’s overtly totalitarian society from 1984.

As Media Studies scholar, Neil Postman observes in the preface to his 1985 book, Amusing Ourselves to Death, though Huxley and Orwell are often grouped together, the two authors painted starkly different dystopian worlds.

“Orwell warns that we will be overcome by an externally imposed oppression,” Postman writes. “But in Huxley’s vision, no Big Brother is required to deprive people of their autonomy, maturity and history. As he saw it, people will come to love their oppression, to adore the technologies that undo their capacities to think.”

Meanwhile, the U.S. Bureau of Labor Statistics calculates that the average American only spends about 19 minutes a day reading.

To modern readers, including most liberals, this argument smacks of elitism.

(Indeed, I was accused of as much myself last summer, when I criticized Pride Portland’s decision to kick off its annual LGBT-oriented “Pride” celebration week with a thoroughly anti-intellectual Great Gatsby-themed party. Vapid defenders of the Gatsby theme made no attempt to hide their outright disdain for print-culture and anything literary. One commenter told me he “does not give a f@!#” about the book’s sociopolitical themes, only the “style and look” Fitzgerald’s novel recalls. And here I always thought such reveling in ignorance was restricted to the right.)

Contemporary scholars of the Humanities and Cultural Studies embrace mass culture in all its myriad forms as “democratic,” or in an attempt to meet the working class public “where they are at.” This latter concept is sometimes phrased as “Giving the audience what it wants.”

Yet, as Macdonald points out, “what the audience wants” is typically manufactured by Hollywood producers, advertisers, and directors. In other words, these “wants” do not arise out of genuine individual desires.

Mass culture is imposed from above. It is fabricated by technicians hired by businessmen; its audiences are passive consumers, their participation limited to the choice between buying and not buying. The Lords of kitsch, in short, exploit the cultural needs of the masses in order to make a profit and/or to maintain their class rule.

As John Milton once wrote, “They who have put out the people’s eyes reproach them of their blindness.”

The point here is not to deride individuals for their tastes or leisure activities. Rather, Macdonald hoped that by pointing out the intrinsically exploitative nature of popular culture–which was understood at the time to be the culture of the bourgeoisie–citizens would become more self-aware and perhaps eventually break free of Masscult’s all-encompassing allure.

With that in mind, let’s return to The Force Awakens. The film is distributed by Disney. (Lucas sold the rights of the Star Wars franchise to the Mickey Mouse company for $4.05 billion in 2012.) It has raked in $740.3 million at the box-office, to date. And, aging star Harrison Ford was reportedly paid 76 times more than 23-year-old Daisy Ridley to reprise his role as Han Solo. Apparently, when it comes to issues of women’s equality, Star Wars, Disney, and Abrams are still living in the 1970s.

As CounterPunch writer, John Wight writes of this discrepancy in a recent piece titled, “Star Wars and the Death of American Cinema,” “It is proof that the story of America is not good versus evil or light versus darkness at all. It is instead the story of the super rich versus everybody else.”