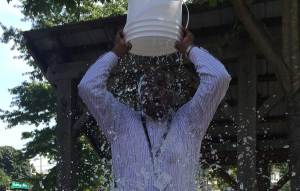 Superintendent Emmanuel Caulk started the school year with a photo op, and took the Ice Bucket Challenge to raise awareness of ALS. A couple months later he is dealing with an “unfounded” controversy over former Deering football coach Matt Riddell.

Allegations from a student’s parents reached the NAACP. The parents were concerned that the school district’s response was slow and lacked transparency.

Superintendent Emmanuel Caulk’s written response to continuing media inquiries said, in part, “Unfortunately, our obligation to keep personnel matters confidential sometimes leads to unfounded speculation and innuendo, or the mistaken impression that something is being hidden. In this instance, the coach’s decision not to reapply was entirely voluntary.”

Caulk went on to say that ongoing staff training with regard to racial and other forms of bias will continue and expand. Those efforts will include training on discrimination, harassment and bullying for all coaches.

In response to a FOIA request filed by The West End News on December 1st, the Superintendent’s Executive Assistant Patty Apon repeated Caulk’s line that certain requested communications are confidential, including personnel records or communications that contain personally identifiable information about students. Apon stated that any public records would be provided in 30 days.