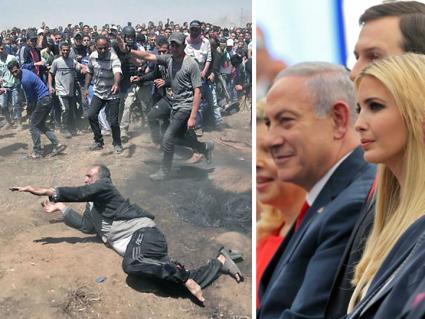 A Palestinian is injured in Israel’s latest escalation of violence (left), while Israeli Prime Minister Benjamin Netanyahu and Ivanka Trump celebrate the opening of the newly-relocated U.S. embassy in Jerusalem (right).

Israel’s May 14 assault on peaceful Palestinian protesters is the latest escalation of its 70-year long campaign of ethnic cleansing in Gaza. While American and Israeli officials unveiled the newly-relocated U.S. embassy in Jerusalem, Palestinians marked the 70th anniversary of Israel’s occupation of Gaza by marching en masse across Israel’s erected border fence.

Israel took this peaceful defiance of occupation as an act of aggression and promptly slaughtered 60 Palestinians — including seven children — while wounding 1,861. Amnesty International has called Israel’s attack on unarmed Palestinians “an abhorrent violation of international law,” likening it to a “war crime.”

Palestinians refer to the May 14, 1948 founding of Israel — and the violent, forced removal of the Arab people already living there — as the “Nakba,” or “catastrophe.” Since then, Greg Shupak writes in a recent piece for Jacobin, “every May 15 has been Nakba Day, when Palestinians mark the ethnic cleansing of their people entailed by the creation of Israel.”

In March, Palestinian protesters embarked on their “Great Return March,” which culminated with Monday’s attempt to breach the border fence.

Israeli government officials insist the march was anything but “peaceful.” Rather, they claim it was organized by Hamas with the intent of crossing the border fence to kill Israeli civilians.

“This is a terrible, cynical manipulation by Hamas of the public discourse and the public arena,” David Friedman, the U.S. Ambassador to Israel, told NPR’s Steve Inskeep during a May 14 interview.

Throughout the interview, Friedman offered the same empty, baseless talking points defending Israel’s “right to protect itself,” and boasting of the admirable “restraint” the Israeli Defense Forces (IDF) have employed against the unarmed protesters.

“Tell me what country allows enemies bent on murdering their citizens to have free access to cross the border,” said Friedman, seemingly adopting rhetoric straight from Donald Trump’s anti-immigrant playbook. No Hamas representative or Palestinian spokesperson was featured in the segment to counter Friedman’s bogus claims. So much, it seems, for NPR’s vaunted “objective” journalism.

This toothless, stenographic coverage of Israel’s assault is typical of most of the “liberal” media, which is almost universally biased toward Israel. As Shupak, a professor of media studies, observes of the New York Times’ coverage of the assault, in a recent piece for the media watchdog group, Fairness and Accuracy in Reporting (FAIR):

The [NYT editorial] board claimed that “Israel has every right to defend its borders, including the boundary with Gaza,” incorrectly suggesting that Palestinians were aggressors rather than on the receiving end of 100 years of settler-colonialism.

The media’s Zionist coverage makes it extremely difficult for readers to obtain accurate information about the Israeli-Palestinian conflict. And this remains the case even as Israel’s public image as eternal victim — rather than a bellicose, heavily armed oppressor — has started to crumble in recent years.

Palestinian justice movements like the Boycott, Divestment, and Sanctions (BDS) campaign have helped shift Americans’ perspective on Israel. Little wonder then, that so many university administrations are attempting to ban the organization’s activities on campus, or paint the movement as “anti-Semitic.” A bill in Congress, meanwhile, would literally make it a crime to engage in BDS activities, with a $1 million fine and up to 20 years in prison. The bill enjoys bipartisan support, with 32 Republicans (including Sen. Susan Collins) and 15 Democrats currently signed on as co-sponsors. (France has already passed a similar law, criminalizing BDS activism.)

Yet, disturbing as the implications of the so-called “Israel Anti-Boycott Act,” would be for free speech, the fact that lawmakers are giving serious consideration to such an abjectly anti-democratic piece of legislation shows just how frightened they are of the BDS movement. It shows that the voices for Palestinian justice are gradually making an impact.

Academy Award-winning actress, Natalie Portman, further raised BDS’s profile when she refused to accept an award from the Israeli Genesis Prize Foundation, on April 19. Portman cited “recent events in Israel that have been extremely distressing [for me]” for canceling her appearance at the awards ceremony. A press representative for Portman stated the actress, “cannot in good conscience move forward with the ceremony.”

After decades of egregious human rights violations against Palestinians, Israel’s recent massacre of peaceful protesters in Gaza has made its brand so toxic that even well-known Israeli-American cultural figures, like Natalie Portman, now refuse to blatantly whitewash, or art-wash, Israeli crimes and apartheid policies.

Yet, as public opinion has increasingly shifted against Israel in recent years, the Israeli government, headed by Zionist extremist and Trump supporter, Benjamin Netanyahu, has responded by moving further to the right. As a result, the Netanyahu government has become far more brazen in its callous treatment of the Palestinians.

The Zionist mission that drives the Israeli government and, sadly, much of Israel’s working class, can be boiled down to racism — pure and simple. This racism is a routine feature of numerous opinion polls of Israeli Jews’ attitudes toward Arabs. A landmark study by Tel Aviv University political psychologist, Daniel Bar-Tal conducted shortly after the Dec. 27, 2008 – Jan. 18, 2009 attack on Gaza known as “Operation Cast Lead,” concluded:

Israeli Jews’ consciousness is characterized by a sense of victimization, a siege mentality, blind patriotism, belligerence, self-righteousness, dehumanization of the Palestinians, and insensitivity to their suffering.

Reporter, Max Blumenthal, in his 2013 book, Goliath: Life and Loathing in Greater Israel, likens the anti-Arab racism that characterizes so much of Israel’s citizenry to the “crude bigotry that poor whites living under the boot of an agrarian oligarchic class displayed toward poor blacks in the Jim Crow South.”

The left must stand in solidarity with the oppressed people of Palestine — a people who are being systematically and deliberately slaughtered. Their fight is our fight.

“The Nakba is not a thing of the past,” writes Sumaya Awad, in a recent story for Socialist Worker. “Its impact is felt by every Palestinian, and its memory shields against a systematic attempt to whitewash the violence and bloodshed that characterized Israel’s birth 70 years ago, and that sustains Israel’s apartheid regime today.”