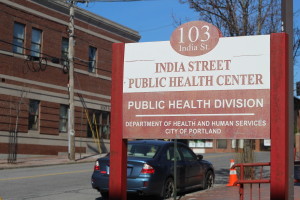 On April 21, the Portland City Council did what it does best: Listened to hours of public comment during which the majority of speakers expressed overwhelming opposition to “Proposal X,” and then proceeded to vote in favor of “Proposal X,” anyway. Clearly Mayor Ethan Strimling has yet to instill upon the other councilors the virtues of his beloved practice of “listening.”

(I have seen video evidence of former Councilor John Coyne scrolling through his Netflix account on his iPad during one of these public comment sessions a few years back–which should give readers an idea of just how invested councilors are in what their constituents think.)

The specific subset of the City Council at work here is the Finance Committee, and “Proposal X,” in this case, is City Manager Jon Jennings’ controversial plan to close the India Street Public Health Center.

The highly regarded city-run health clinic has long been a beacon for low-income patients suffering from HIV, opiate addiction, and hepatitis among other health issues. Closing the clinic is at the heart of Jennings’ proposed $236 million city budget which would take effect July 1. The city plans to transfer India Street’s more than 1,000 patients to the private “non-profit,” Portland Community Health Center.

But so far, the city is woefully unprepared to make this transition.

According to an April 14 Portland Press Herald/Maine Sunday Telegram story by Randy Billings, PCHC currently serves more than 6,600 patients, and it is “unclear how it will ramp up its services to accommodate the additional patients, including hundreds who are HIV-positive, because planning is only in the initial stages.”

Portland health and human services director, Dawn Stiles, claims the city has only a “skeleton of a transition plan laid out.”

City officials believe PCHC has a higher Medicaid reimbursement rate, which is another factor driving the decision. But according to Bangor Daily News columnist, Chris Busby, the PCHC’s “ability to get federal grant money for HIV services is … a big question mark …”

Busby calls this uncertainty “another gamble Jennings is willing to make with people’s lives.”

The other issue at stake is Jennings’ indirect assertion that the city government should not be in the business of providing health care to its most vulnerable residents. Rather, Jennings views his proposed budget as a “way to get back to basics, such as paving roads and fixing sidewalks,” Billings writes. Jennings “has said that by providing direct clinical services to patients, Portland is an outlier among U.S. cities. Instead, the city should concentrate on policies and leave the clinical work to hospitals and other nonprofits.”

In other words, health care, like every other commodity under capitalism, is best left in the hands of the “free-market.” It is a notion right out of the right-wing bourgeois playbook. To paraphrase Arnaud Amalric, “Privatize it all and let The Market sort ’em out.”

This is a prime illustration of why we need universal, not-for-profit health care for all in this country, as nearly every other nation in the world enjoys. The capitalist private sector — including so-called “nonprofits” — turns health care into a commodity. Those who cannot afford it … well, they can die quickly as U.S. Rep. Alan Grayson (D-FL) once sardonically put it.

Sen. Bernie Sanders has done a formidable job of championing single-payer in his quixotic campaign for president. Unfortunately, Sanders is running for president in a party that is adamantly opposed to single-payer. House Minority Leader Nancy Pelosi said as much during a press conference back in January. In a rebuttal to Sanders’ plans to raise taxes in order to finance a universal health care program, Pelsoi told reporters, “It’s no use having a conversation about something that is not going to happen.”

Indeed, the great contradiction in Sanders’ campaign is his goal of sparking a “political revolution” within the thoroughly establishment Democratic Party–history’s second most enthusiastic capitalist party.

(Fortunately, the Green Party’s Dr. Jill Stein is also running on a platform of single-payer health care, as well as a vastly more humane foreign policy program compared to Sanders’. Sanders’ supporters may want to check her out, if only for the practical fact that, unlike “Bernie,” Stein will actually be an option on most voters’ ballots.) 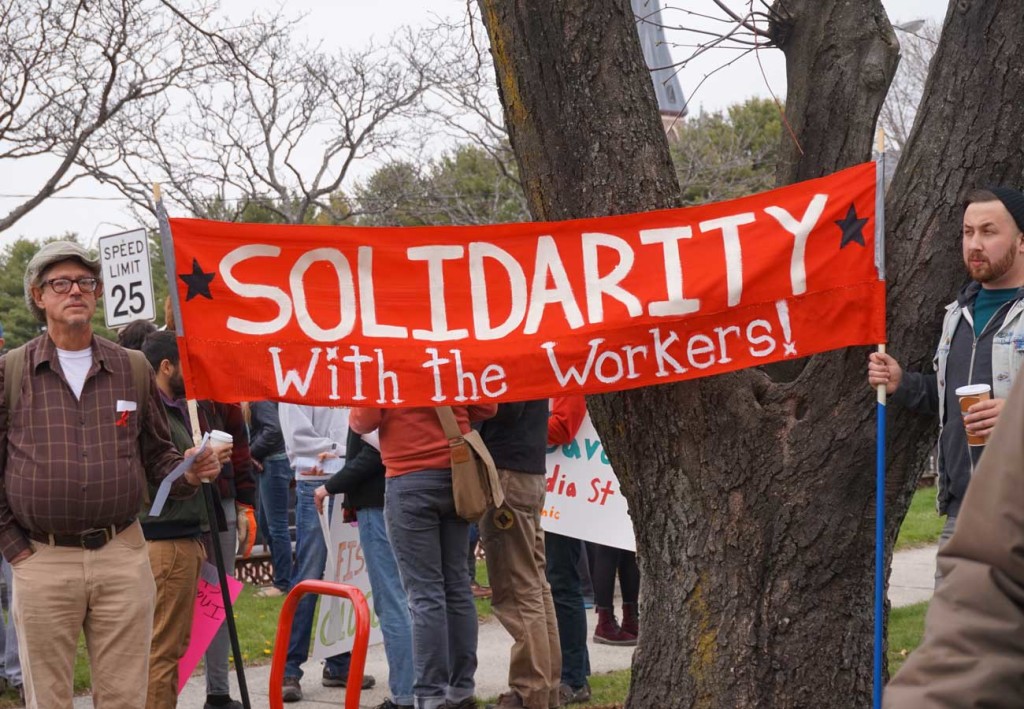 Rally to save India Street on May Day.

There are currently 33 million Americans (or about one in six) who do not have health insurance. And despite its name, the Affordable Care Act has done little to offer Americans anything in the way of “affordable” health care.

“Many people with curable ailments have died for lack of care,” writes veteran investigative reporter, Dave Lindorff, in his submission to the 2014 essay-collection, Imagine: Living in a Socialist USA. “That’s what happened to a teenage boy brought to a hospital by police in Chicago. He died on the sidewalk as the cops stood by helplessly: the hospital wouldn’t admit him because he had no insurance.”

Lindorff goes on to observe that the United States is “the only modern industrial nation in the world that does this to its people.”

In short, capitalism turns everything — including ultimately, human lives and the ecosystem that supports life on the planet — into a commodity. As long as we live under such a system, this will be the case for basic necessities like health care and housing.

As Lindorff points out, the U.S. already has a government-run health care program–albeit, one limited to citizens 65 and older. It is called Medicare. Simply expand Medicare so it covers everyone, and well … there is your single-payer program.

Keep that in mind the next time your conservative uncle (or your liberal aunt, for that matter) tries to tell you single-payer would “never work” here, because the United States is “not like Sweden.” Medicare seems to work pretty fine to me. And like Social Security, Medicare is also incredibly popular among Americans–including Ron Paul-inspired, anti-government conservatives. Can you say, “hypocrite” … ?

As Portland continues to become a must-move-to destination for transplants and retirees, we see the city government enacting the same cost-cutting austerity programs instituted throughout other parts of the country, as well as abroad. These measures force poor and working class residents to bear the brunt of the actual and social costs, while bestowing more tax-breaks and other incentives on the rich. The closing of the India Street clinic is just another example of this cynical form of class-warfare.

The need for universal health care is obvious. But, as Sanders’ ill-fated presidential run illustrates, we cannot get there through elections alone. In particular, left-wing voters must completely break away from the Democratic Party, which has made painfully clear it has no intention of ever supporting health care for all.

“In a socialist society,” Lindorff writes, “a parent with a sick baby could go straight to the doctor, or in an emergency, to the hospital. The baby wouldn’t be at risk of suffering through something potentially life-threatening, and the parents wouldn’t have to face the financial anxiety of deciding to see a doctor–or suffer the guilt of not seeing one.”

Author’s note: Readers concerned about the potential closing of the India Street Health Center can attend a May Day rally to save the clinic, Sunday, May 1 at 1 p.m. in Portland’s Lincoln Park. The rally is hosted by the groups Save India Street Public Health and the Homeless Solidarity Project. Rally participants should wear red. See the Facebook event page for more information.