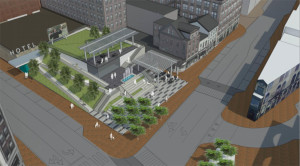 On November 5th, the Congress Square Redesign Study Group recommended a ground-level park concept rather than a roof-top park on top of an event center. This recommendation makes a partial sale of the park for an event center less likely, but still possible.

“The Council is in the driver’s seat,” said Councilor David Marshall, Co-Chair of the Congress Square Park Redesign Study Group.

The Study Group voted to recommend the ground-level park with 10 out of 17 votes. There was one member not present, and one member, Steven Hewins from Portland Downtown District, abstained. Hewins did not think it was in the group’s charge to make a recommendation.

The memorandum tasking the Study Group does not specifically call for a recommendation, but directs the group to evaluate the two scenarios.

Marshall noted that the purpose of the group has always been to make a recommendation for the redesign of Congress Square Park.

Members who voted for the ground-level recommendation did so for many reasons, not-the-least of which were cost projections — $1.4 million versus $1.7 million for the roof-top version. These costs are estimates that do not include costs for reinforcing the event center structure to hold a roof-top park. 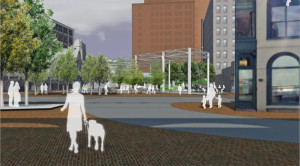 Patrick Costin, an architect working with Rockbridge, the potential buyer, said that the real estate deal would make the potential roof-top park far more affordable. The Purchase Sale Agreement made with the City before the parks initiative passed and stopped the sale, would have sold the park for $523,640. A new purchase sale agreement would be negotiated for a roof-top park to happen. However, HUD regulations may prevent the use of such funds from going towards the park’s redesign.

The Study Group’s recommendation and supporting materials on both concepts will go before the Council at their next regular meeting, Monday, November 17th, 7 p.m., in City Council Chambers. There will not be public comment, because the issue will be referred to committee. Members of the public may share their thoughts by filling out an online form provided on the City’s website.