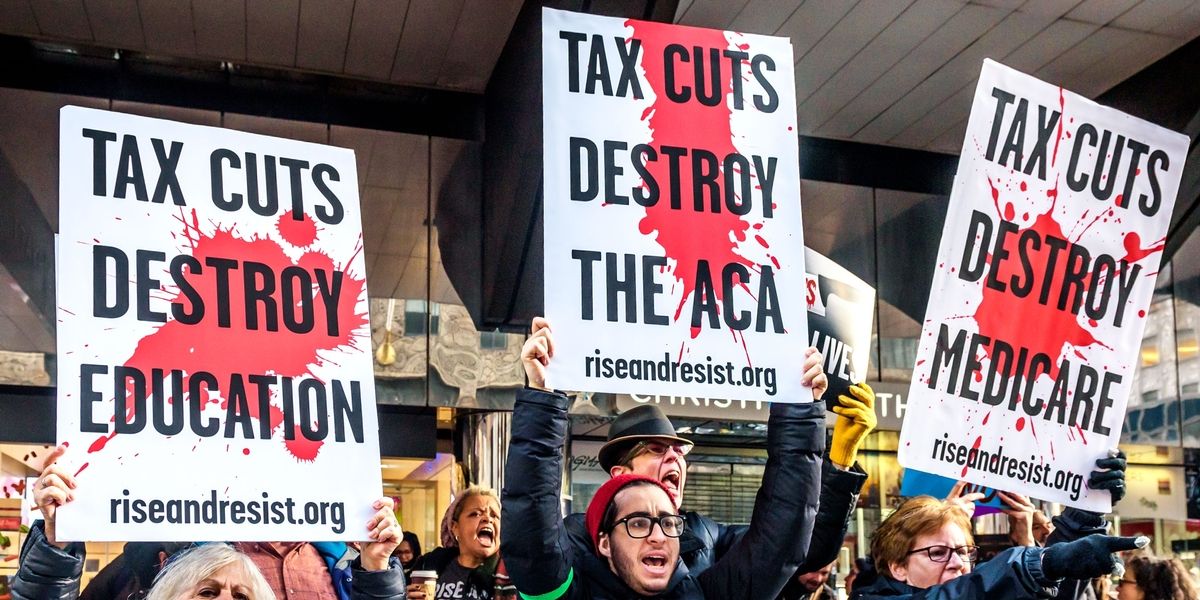 Is the Republican Party actively trying to commit suicide? On the surface, this certainly seems to be the case.

Last week, the U.S. Senate rushed through its version of a deeply unpopular tax “overhaul” plan (read: a Ponzi scheme for the rich) with zero debate, discussion or public transparency.

As I outlined last week, the bill is little more than a naked, brazen giveaway to the wealthy and corporations. It eliminates the estate tax, ensuring affluent families like the Waltons remain wealthy — and tax-free. It lowers the already abysmally low corporate tax-rate from 35 percent to 20 percent. Corporations like GE, General Motors, NewsCorp, and Maine’s own WMD-manufacturer, Bath Iron Works already pay little to no taxes. It taxes graduate students at a ludicrous 400 percent, treating their paid tuition as “income.” And the bill will ultimately cause working-class Americans’ taxes to increase.

The Republicans’ plutocratic plunder does all of this (and more) at a time when nearly half of Americans live in poverty. One-percent billionaires like Warren Buffett and Jeff Bezos, meanwhile, own more wealth than the bottom 90 percent combined.

As the editors of Socialist Worker point out, “Judged by income, the ‘world’s greatest democracy’ is more unequal than at any time in a century and a half. Yet Republicans have chosen this moment to drive through tax cuts that will super-size inequality.”

Little wonder why the vast majority of Americans oppose the GOP’s tax heist. Voters disapprove of the bill 53-29 percent, according to a Dec. 5 Quinnipiac University poll. Sixty-four percent of voters say the tax plan “benefits the wealthy the most.”

As for Donald Trump (I refuse to refer to him as “President”), respondents gave him a whopping 35 percent approval rating. Fifty-six percent of voters believe Trump is “not fit to be president,” according to the poll. And they say this is a divided country!

So, if the tax bill is so deeply unpopular, why are Republicans so hell-bent on ramming it through Congress? (Trump wants it on his desk before Congress breaks for Christmas recess at the end of next week.) Does the GOP have a death wish? Do they want to lose the 2018 midterm elections by sticking it to the very working-class voters they (unconvincingly) claim to represent?

While the bill certainly could backfire in just this way, I suspect there is method to the Republicans’ madness. And that “method” is they are basically going for broke. Republican leaders Paul Ryan and Mitch McConnell have determined that this is their chance to finally carry out the neoliberal, free-market counter-revolution Ronald Reagan launched in the 1980s. They have made a calculated decision that they can rush this bill through and still weather the midterm elections next year.

And even if they do not, they will still have succeeded in inflicting incalculable damage to the working class — damage that the Democrats, despite their rhetoric, will not undo.

But what is most striking about this bill is how unabashedly upfront Republican lawmakers have been in their cow-towing to the corporate elite. While once Republicans (and Democrats) at least attempted to wrap their bourgeois, ruling-class ideology in a veneer of rhetoric about how tax-cuts for the rich help the “middle class,” and “create jobs,” now they do not even bother to disguise their true pro-corporate motivations.

In fact, many Republican representatives have been quite candid about who their true constituents are.

Sen. Lindsey Graham (R-SC) told NBC News their wealthy and corporate donors have already warned him that the “financial contributions will stop,” should Republicans fail to get the tax bill through.

Gary Cohn, the White House chief economic advisor and a former Goldman Sachs investment banker, told CNBC’s John Harwood, “The most excited group out there are big CEOs, about our tax plan.”

And don’t be fooled by Trump’s bogus rhetoric: He and his family stand to benefit immensely from this tax heist, especially if Congress succeeds in eliminating the estate tax — or, as Republicans prefer to mischaracterize it, the “death tax.”

As The Intercept’s Ryan Grim writes in a recent piece:

[T]he key question is who gets a tax hike and who gets a tax cut. Put simply, the bulk of the tax cut is going toward the rich, while the tax increases go to everybody else. And so the bill, properly described, is two things: the largest tax cut — and also the biggest tax increase — in American history.

Perhaps the biggest irony of the tax bill is it will add $1.4 trillion to the federal deficit — a longstanding concern for “fiscally conservative” Republicans. Yet, the so-called “deficit hawks” in the party have largely remained silent about the debt. And this, I suspect, is by design. When the deficit inevitably explodes in another five to ten years, Congress will use the ensuing economic crisis as a cynical justification for pushing through further austerity measures — including deep cuts to Medicare, Medicaid, and Social Security.

In other words, when the balance finally comes due for this corporate welfare handout, you and I will be forced to foot the bill.

But this legislation is not yet law. The House still needs to reconcile its version of the bill with the Senate’s. In other words, there is still time for the left to oppose this Robin-Hood-in-reverse scheme.

The recent protests at Republican Sen. Susan Collins’ Portland office have been encouraging in this respect. Sen. Collins was a key vote in preserving the Affordable Care Act, earlier this year — but the “moderate” senator’s “courage,” and “independence” in bucking her own party on “Trumpcare” has been vastly overstated. Collins was pressured to vote against the GOP’s atrocious health care bill because of the persistent, coordinated protests in her Maine and Washington, D.C. offices — especially those organized by disabled activists concerned about cuts to Medicaid.

Similar protests of the tax bill could once again force Collins’ hand. We should take our cue from the graduate students throughout the country that have staged demonstrations against the bill.

As Socialist Worker concludes in its editorial:

We have an opportunity in the next few weeks to throw our efforts into the fight against the Republican tax-cut rip-off, in support of graduate students and anyone else who wants to challenge this atrocity.

We might not win if we fight — but we definitely won’t if we never fight at all. And whatever the outcome, the example we set now can help build a stronger resistance for the future.