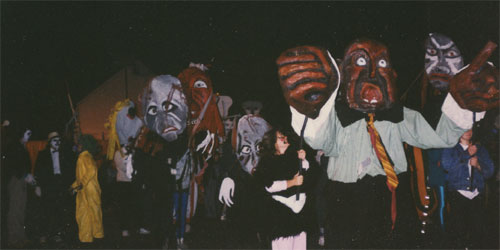 For last year’s parade the city required organizers to hire two police officers at $300 each to lead and trail the parade. They also required 15 volunteers to stand with bright vests at intersections along the parade route. “It’s dark, there are costumes, kids are involved, and we don’t want any accidents,” said City Communications Director Jessica Grondin.

The parade has grown to include participants from all over the city and surrounding areas, growing to a size that Shoestring could no longer safely manage. The Shoestring Theater is a puppet theater based on Brackett Street. Over the years, they directed the Halloween parade as a volunteer celebration with help from many other neighborhood partners including: Learning Works, Youth in Action, The Fresh Approach, Neighborhood Policing, and Americore.

Shoestring Theater asked other neighborhood groups to assist or take over the event, but there were no takers. Grondin says she has heard from West End residents that might be willing to take the parade organizing over, if they can raise the $600 needed to hire officers and find enough volunteers.

You can read the letter from Shoestring Theater at thewestendnews.com/halloween-parade-cancelled.