Newsy Musings: Coyotes in the City

Have you ever had that sense, walking through the West End or near the Prom, turning a corner, and you feel like you are no longer in a city at all?

Something bucolic catches your eye, the light changes, a wildflower scent from your childhood transports you to a more rustic place. How about a strange, yet familiar, sound like… a coyote call?

Hey, wait a second, we don’t get coyotes in the city, do we? Turns out, we do.

Coyotes have been spotted in the Portland area. The West side has a few recent reports and sightings. Some locales include: Salem Street, the Prom, and the Western Cemetery (which prompts a great band name or neighborhood mascot, City Cemetery Coyotes). 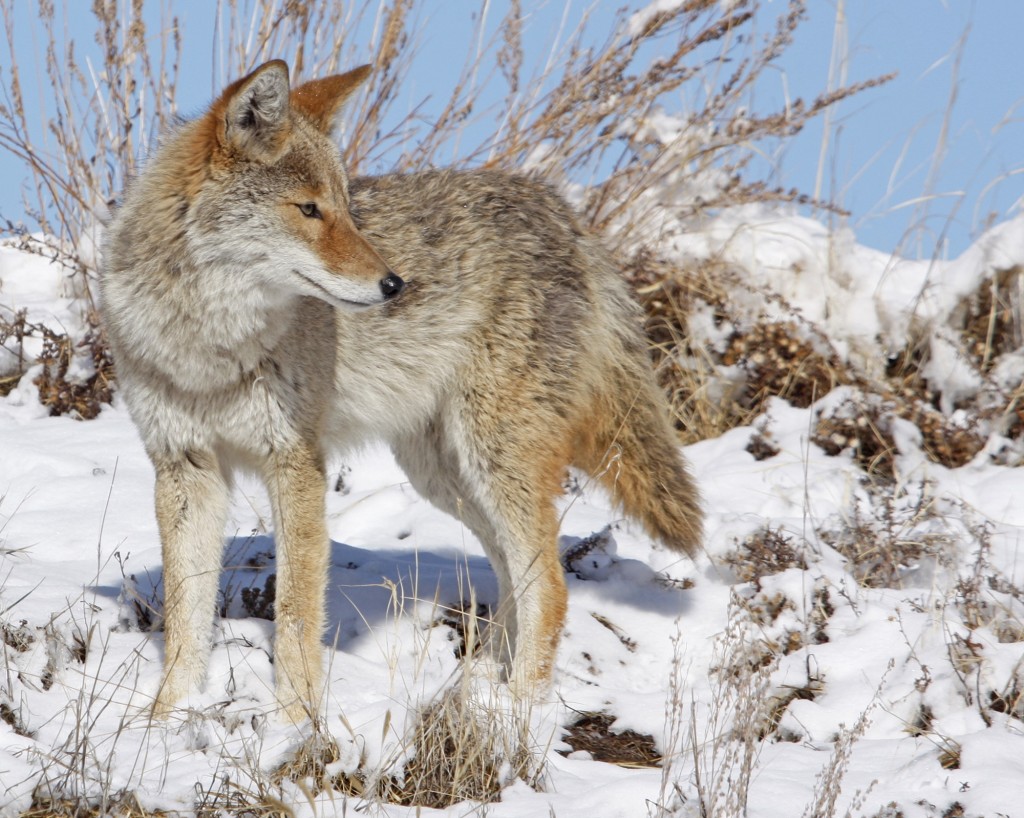 Elsewhere in the city the Jetport, Fore River Sanctuary, and the Capisic Pond areas have had sightings.

Cape Elizabeth rescued a coyote pup this spring (seriously, Google “Cape Elizabeth coyote pup” and I’m tellin’ you, that’s the cutest ball of fluff you’ve ever seen). Kennebunk boasts a recent photo of a coyote, not an easy animal to catch on camera.

Per the Maine Department of Inland Fisheries & Wildlife website, coyotes are a good sized animal. Adults are about 30-35 pounds. It’s estimated that 12,000 coyotes are in Maine, and there has never been a documented human attack in our state. These resilient, resourceful animals don’t tussle with humans, however parents of small children would be wise to teach their kids how to react to a coyote.

A few pointers from the state site: don’t approach their den, and don’t leave small kids unattended in an area of frequent sightings. Prepare children that coyotes live in the neighborhood, too, and they are just looking for their food (not us). If a coyote should approach, teach children not to run, but be “big, mean, and loud.” Shout, “Go away coyote!” The coyote should scram.

Coyotes may not be threatening to humans, but they are a threat to outdoor cats, which are easy prey. Coyotes mostly hunt at night, so keep your kitties indoors; coyotes are likely to be sighted before sunrise and after sunset. (My soapbox: indoors is the best place for domestic felines. Indoor cats live longer and bird populations don’t suffer.)

Other tips to discourage coyotes from your yard: fence your fruit trees and pick up fallen fruit, and secure your compost bins. Compost should not have animal matter, and it should be covered with soil or lime.

Reading about coyotes in urban areas, one of the key things experts say to do is to share information on sightings. Guess how I found out about the current coyotes. That’s right, on social media!

I occasionally follow the Nextdoor West End bulletin boards (westend.nextdoor.com), in addition to various West End Facebook groups and pages. There’s a fair amount of neighborhood news in these forums.

A kind neighbor shared the latest coyote sightings via Nextdoor. It’s a great idea to let your neighbors know if a coyote was spotted; they may not be aware that they need to keep their cats or small dogs indoors. Plus, it’s fun to hear about all the wild critters sighted lately: raccoons, cemetery foxes, wild turkeys, and someone saw a yeti on Avon Street…