At the Annual District Two Meeting (Parkside, St. John Valley and West End), on November 6th, City staff announced new parking rules. The rules will be decided on by City Council, and take effect as soon as next spring. 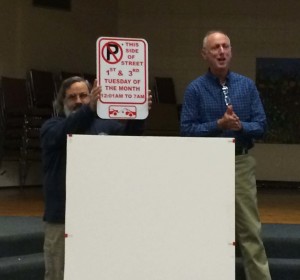 Currently overnight parking restrictions occur weekly, creating needed space for crews to clean the streets. The new regulations, set to role out in April 2015, would change the restrictions to every other week.

For example, instead of restricting parking on one side of the street every Tuesday, it would occur on the first and third Tuesday of the month. The parking restriction would begin at 12:01 a.m. and run to 7 a.m. This is a change from current practice, where the restrictions begin at 10 p.m., occasionally causing confusion as to what day the ban actually falls on.

The City is unable to clean streets every week. A biweekly schedule is meant to reduce disruption for residents, while still maintaining adequate street cleaning services.

Residents worried that it would be confusing to know whether it is the first or third week of the month. City staff said the pilot projects have demonstrated otherwise. Pilot projects are in place now in Parkside, and on Brackett and Winter Streets in the West End.

The new rule will be voted on by City Council this winter, and would be rolled out in April 2015, with a grace period in May. During the grace period, improperly parked residents and visitors could receive warnings, instead of tickets, on their windshields.

The rollout will require that 17,000 parking signs be replaced, at a total cost of about $140,000 in materials and labor. Resident Frank Turek wondered if the sign change could include bi- or trilingual signs for immigrant residents. City staff thought the universal parking symbols on the new signs would be adequate, but did not rule out the possibility.

Public Services staff want to move towards needs-based cleaning, where residents report leaves or other debris that need to be cleared from their streets. Residents can contact Public Services about street cleaning needs at 874-8468.