A report released January 16th by NOAA and NASA demonstrates that 2014 was the warmest on record.

“A coastal state like Maine is particularly vulnerable to the effects of warming ocean temperatures and rising sea levels,” noted Congressperson Chellie Pingree in a written statement the day the report was released.

A few days before the report was released protestors gathered on a freezing evening at Congress Square. They were calling on President Obama to prevent the construction of the Keystone XL, a proposed pipeline that would transport Canadian bitumen, or tar sands, from Alberta through the Midwest. 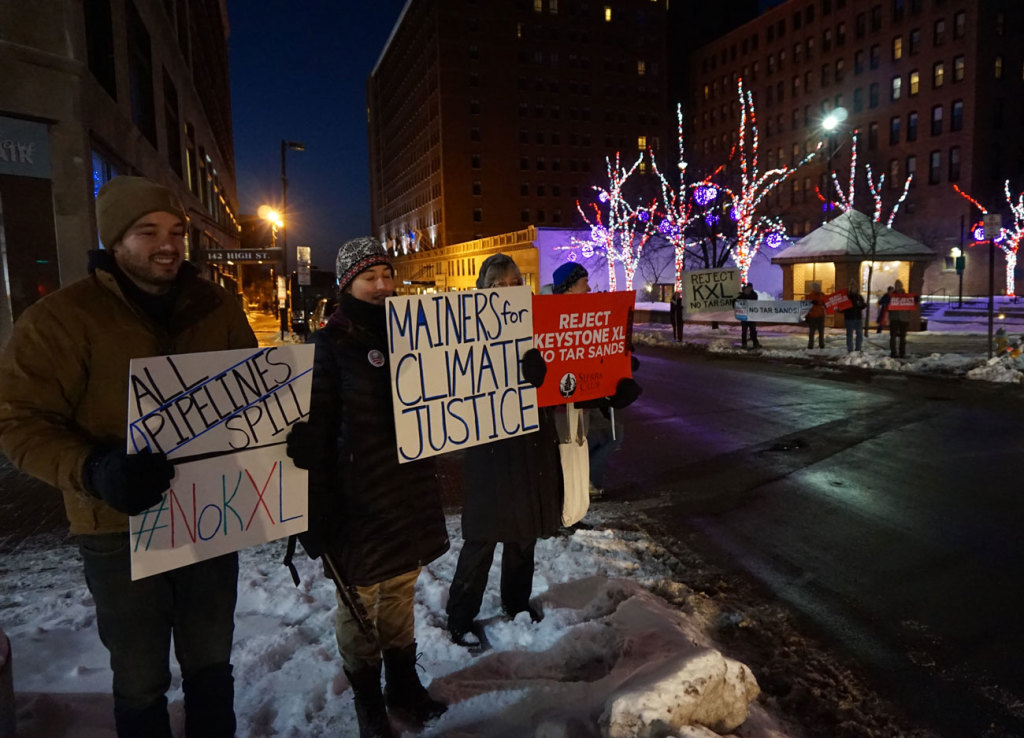 Protestors in Congress Square participated in a national day of action on January 12th.

Many scientists believe that unleashing the oil that is trapped under Alberta would be devastating for the climate, causing an even greater rise in carbon levels in the atmosphere and further global warming.

James Hansen, director of the NASA Goddard Institute for Space Studies, said in an op-ed in the New York Times that tapping the carbon stored in Canadian tar sands would be “game over for the climate.” 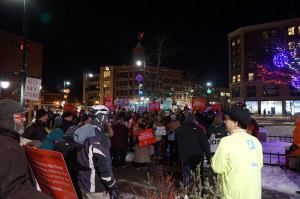 So the small band of protestors, numbering approximately 70 hardy souls on an absolutely frigid night, were joining with protestors across the nation to call on Obama to stop the pipeline.

“It’s up to the President. It’s always been in his power to [reject the Keystone pipeline]. It’s time for him to veto it and become the Climate President, not the Pipeline President… We’ve waited long enough,” said Sierra Club local chapter director Glen Brand.

Keystone XL was approved in early January by the House, and its approval by the Senate is expected any week now.

Clearly, Pingree voted against the pipeline. Not so for Poloquin. Meanwhile, Senator Collins is likely to support it.

Senator King has come out strongly against the pipeline calling tar sands “some of the world’s dirtiest and most climate-harming oil.” 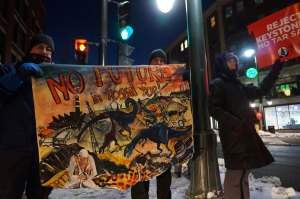 “No future in fossil fuel.”

Is the Keystone pipeline necessary? Will it create jobs, lower fuel prices, or really achieve anything other than making a few Canadian corporations rich and powerful beyond reason?

No, the pipeline is not necessary. For starters, few American jobs will be created by the pipeline.

Senator King noted that the job creation argument for the pipeline is bogus, saying, “the project will result in fewer long-term jobs than a new McDonalds.”

Secondly, oil prices are already falling thanks in large part to competition from Canadian tar sands and US shale deposits (ever hear of fracking?). This competition has forced OPEC to flood the world’s markets with cheap oil.

Yay, lower gas and heating oil prices! It is good to be able fill up the car after the work commute, or to heat one’s home and actually be able to afford to fill the tank.

But, if you are like the average person, as fuel costs plummet, your use of gas and heating oil goes up. That means more carbon released into the atmosphere and more global warming. It does not matter what the source of the oil is. Cheap fuel means more fuel being burned.

Ultimately if the goal is to stop tar sands, the answer is simple: drive less, lower the temp on your thermostat, tell your elected representatives to support energy technologies that are not carbon intensive, and just generally use less–lots of products made out of plastics and other synthetics are manufactured with petroleum and are shipped around the world using petroleum as a fuel source.

When there are no more customers for oil, then there will no longer be the fear of tar sands.

It’s up to everyone individually to make these changes, and to act together to convince neighbors to change, and to convince large institutions–governments and corporations–to change.

Think that is possible? If not, then the tar sands apocalypse is inevitable.

Three cheers to the die-hard protestors, who were willing to stand in the single-digits cold to convince the President to refuse the pipeline, but it is not Obama who has the power.

If it is possible to slow global warming, then it is up to each of us to change our habits, use far less oil, and work towards a carbon-free world.