The Pesticide and Fertilizer Task Force will take an important vote at its December 21st meeting. They will select a pesticide and fertilizer ordinance from three drafts that were prepared by the City’s legal counsel. The meeting will be held at 5:30 p.m. in Room 24 City Hall.

The City Council charged the Task Force in May to recommend “…a course of action to minimize the environmental and health impacts of chemical pesticides and fertilizers.”

Arguably, the best scenario is for the Task Force to send one draft ordinance to the Energy and Sustainability Committee. However, with three draft ordinances it is likely the Committee will be unable to achieve an unanimous report.  More likely, the Task Force will present a majority recommendation on one version and a minority report on a second version of the ordinance.

Under such a scenario, the Task Force could be seen as kicking the can down the road and leaving the ambitious task of creating one effective ordinance to the Energy and Sustainability Committee. But Council Spencer Thibodeau chairs this small three-person group and he has rescued himself from discussions about pesticide use on private lands. He cites professional conflicts as a real estate attorney. Also, the committee’s other members, Councilors Duson and Ray were just appointed earlier this month.

Concerned citizens may comment on a pesticide and fertilizer ordinance. Send an email with the heading “Pesticide Task Force Feedback” to Sustainability Coordinator Troy Moon at thm@portlandmaine.gov, and Councilor Mavodones and the Task Force will receive the emails before the vote at the December 21st meeting.

Readers can learn more about the draft ordinances through the Task Force webpage. 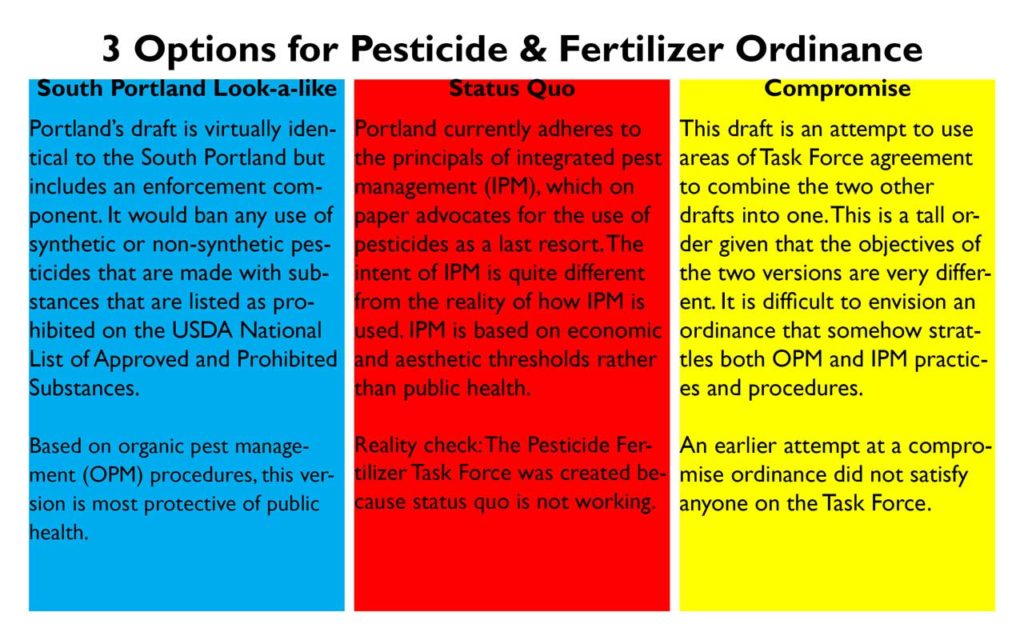