Henry Isaacs talks about his biggest influence and dearest friend

Henry Isaacs is new to the West End after moving from Cranberry Island way up Downeast. He has won a plethora of awards and honors as a Vermont and Maine based artist, and he has travelled the globe painting landscapes as far away as Europe and Africa.

Henry is opening a show on March 10th through May 8th at the Maine Jewish Museum. The show, entitled Gatherings, is a collection of recent work from wandering near his new home to visits with friends and places around the world. 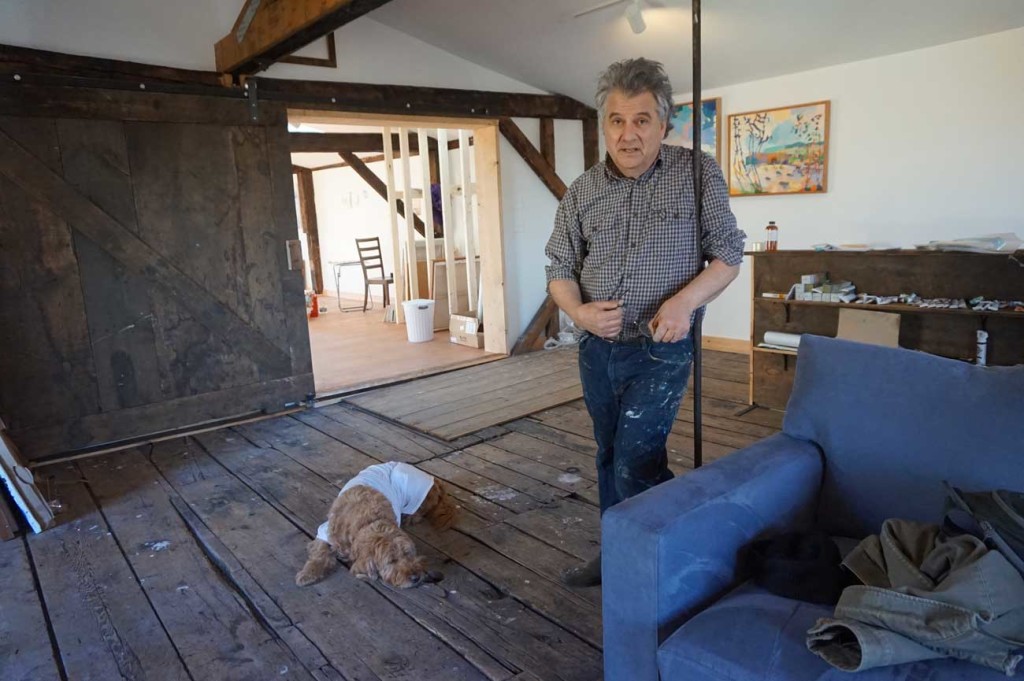 Henry Isaacs in studio with his dog, Ruby.

We met at his brand new studio, opened 10 days before the interview, on Brackett Street. The studio was beautiful, an expansive space, tons of natural light, above an old carriage house. I never would have thought that up until a week beforehand it was a dirty, dusty and perhaps a little dilapidated attic. The 200 year old loft had gone unused, filled with boxes and junk for decades.

Henry saw its potential and had it fixed up, saving as much as possible including 40-inch floor boards (try to find lumber like that these days) and charred beams from the Great Fire of 1866. The wood is hemlock that was cut from the property.

“To find a space like this anywhere is a treat,” Henry says, “I’m a very spoiled artist.”

Henry gets very interested in the history of the places where he works, and this helps to inform his paintings. But it wasn’t just the history that brought Henry and his wife Donna to the West End.

Henry has always done a lot of business from art lovers who live or visit Portland. Even when working out of Vermont and Cranberry Island, half his business was in Portland.

“I found myself doing more and more of my business here. We started spending so much time at one of the Hampton Inns here that we knew when we got a Christmas card signed by every staff member of the Hampton Inn with congratulations for being the guests that stayed there for the most number days out of the year — We knew that was the dubious distinction award and we were too embarrassed and we had to buy a place here.”

So when his wife Donna retired from the tiny school house where she taught on Cranberry Island, they found a beautiful historic home on Brackett Street.

“What I love about our neighborhood, and the unexpected pleasure, is the diversity of the neighborhood.

“I love walking by the Reiche school with my dog [Ruby] and see kids run to the fence dressed in every national garb. Sometimes English is spoken, sometimes not. And it’s awesome. It’s a Maine that not enough people stop and think about it. I’m not sure we in Portland stop and think about it enough, and appreciate what we have.”

Henry spends a lot of time at our neighborhood’s small parks and gathering places. Sometimes painting — he starts every piece on site with a sketch — sometimes just enjoying the diversity of people, watching children play.

He especially loves Harbor View park at the end of Brackett, where he and wife are donating two benches that should be installed as soon as March.

“I’m just much more at home here. I don’t mean to be the poster child for the West End, or to be the most naive thing on the block. But there is something here, and I hope that we can be a part of maintaining it, and improving it for folks.”

Henry mostly does commission work these days for big institutions like hospitals and universities, as well as private homes. He gets to travel the world painting landscapes.

“I love it when what they want is a landscape based on some idea or place they’ve seen in Maine or New England. But sometimes I have to travel to a place that is far away — which is not too bad…” 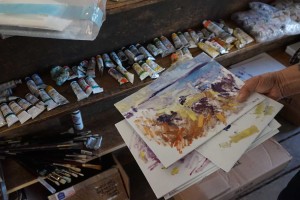 He begins with an onsite sketch, a few splashes of color, upbeat strokes, and a strong sense of the moment. He then finishes the work at his studio turning the sketch into a vibrant and flowing piece.

He uses a special paint, partly because he needs to avoid the chemicals of most oil paints, but also because the paints provide an especially bright color.

Henry says the paint is important as it provides the “heightened color” his work is known for. Showing me around his studio, it was clear that the color was just as vibrant from the moment he makes the first stroke on the canvas to years later after hanging. 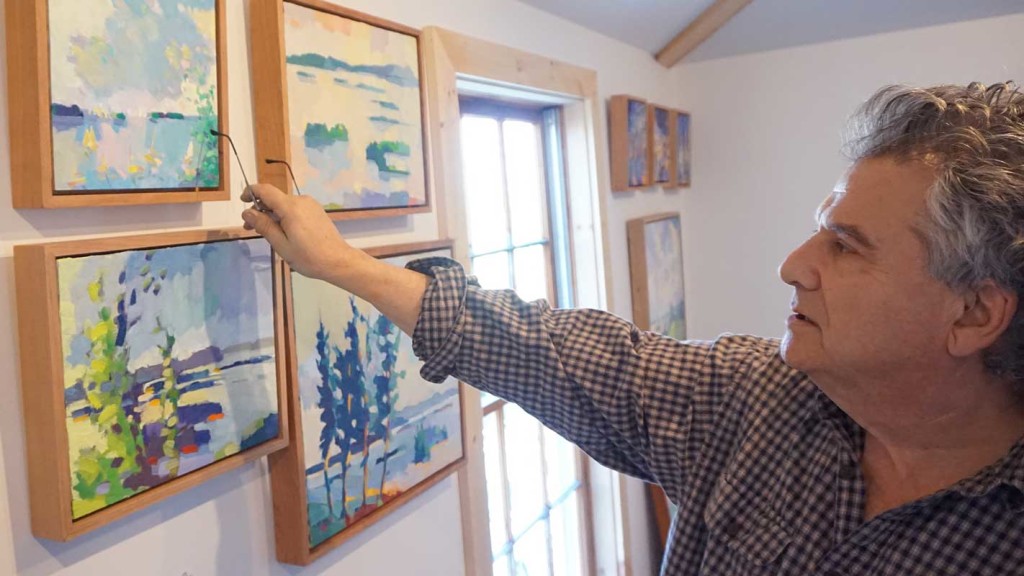 His color may be achieved with special paints, but his eye for it comes in part from his biggest influence, his dearest friend, Ashley Bryan.

“My buddy Dan Kany [freelance writer] when he writes about me talks about all the modernists, he talks about Matisse… And he is right in a way, but look, I never knew Matisse.”

Ashley Bryan is a children’s book writer, artist, puppet maker, Coretta Scott King Award recipient, and he is what Henry misses most about Cranberry Island.

The artists spent every day together. In the mornings Ashley would come to Henry’s studio to enjoy a cup of coffee and paint together. In the evenings, Henry would visit Ashley’s studio and share some rum. It is a friendship that has deeply influenced Henry’s work.

“Both in terms of color and shape and design and spirit, I’ve been very influenced by Ashley. He’s a very optimistic painter. Yet he has had an extraordinarily challenging life.”

Ashley, now 93, was drafted at the age of nineteen to fight in the Second World War. He served in a segregated army. He landed at D-Day. They sent the black troops first.

“It’s not a story that is told in any movie,” says Henry. 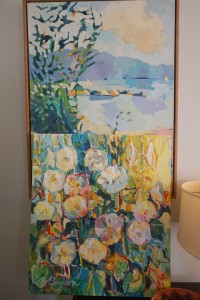 Henry deeply admires Ashley, and he and his wife Donna helped to found the Ashley Bryan Center in 2013 along with other friends and family members of Ashley’s. They are working to distribute 5,000 copies of Beautiful Blackbird, written and illustrated by Ashley Bryan, to underserved children in Maine and New York City.

Of course, Henry’s other great influence is place. Now, that he lives in the West End, where is his work headed?

“I started doing landscape because it sold better. But now I’m bringing the figure back and I’m having fun. We live in an environment that is made and is inhabited.”

The show at the Maine Jewish Museum is a gather of images from Henry’s walks with his dog, Ruby, around town. Visitors will see scenes from Harbor View, the Eastern Prom, Mackworth Island, Willard Beach, Bug Light, as well as paintings from around the world like Santa Barbara, Barcelona, Kenya, Sicily.

“I’m always painting, wherever I go.”

Gatherings: Recent Paintings of Portland and Beyond by Henry Isaacs
Maine Jewish Museum, 267 Congress St, Portland
On view from March 10 through May 8, 2016. There will be an Opening Reception with artist, Henry Isaacs, Thursday, March 10, 2016 from 5pm to 7pm. Admission is free. There will also be an Artist’s Talk on Sunday, April 10 at 2pm.

If you know a West Ender that you want the world to know about, let us know at info@thewestendnews.com. We will be happy to contact them. Who knows, you may be the next featured person in West End People.