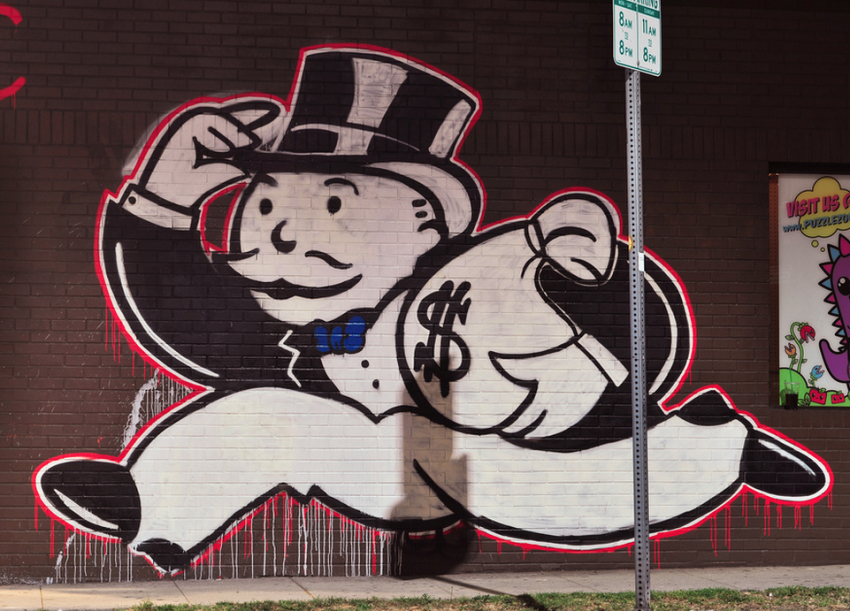 Regular readers of this column do not need me to tell them the Republicans’ tax plan, which passed the Senate early Saturday morning, is basically a giant Ponzi scheme for the wealthy. Indeed, the generically named “Tax Cuts and Jobs Act” is not so much an “overhaul” of the U.S. tax code as it is a robbery — of the poor and working class by the rich.

And this is entirely by design. As Karl Marx and Frederick Engels observed in The Communist Manifesto in 1848, “the executive of the modern state is but a committee for managing the affairs of the whole bourgeoisie.”

While liberals often focus on the corrupting influence of “money in politics,” they tend to overlook the fact that the system of capitalism is one based on class exploitation, extreme wealth gaps, and an unceasing pillaging of the working class by the wealthy elites.

This bill will, among other things, make massive tax cuts for the ultra-rich permanent, lower the already insultingly low corporate tax rate from 35 percent to 20 percent, and cause working-class Americans’ taxes to increase. The Senate tax bill also eliminates the individual mandate for the Affordable Care Act, virtually killing Barack Obama’s signature health care law. Thirteen million Americans stand to lose their health insurance — meager as it is.

The New York Times, in a scathing editorial on Dec. 2, stated the bill is confirmation that “the Republican leaders’ primary goal is to enrich the country’s elite at the expense of everyone else, including future generations who will end up bearing the cost.”

“… Mr. Trump has repeatedly asserted with a straight face that the tax bill would hurt him [financially],” the Times’ editors write.

In fact, it will give him and his family a windfall. That’s because the Senate bill will provide a generous tax break for income that people earn through limited liability corporations, partnerships, and other so-called pass-through businesses that do not pay taxes before passing on profits to owners. Under the Senate bill, the president will be able to claim a 23 percent deduction on profits he earns through his more than 500 pass-through businesses.

And when these tax cuts inevitably explode the federal deficit (analysts predict it will add an additional $1.4 trillion to the deficit), the Republicans (and Democrats) will cynically use it as an excuse to further eviscerate the social safety net, forcing deep cuts in Medicaid, Medicare, and Social Security. Their ultimate goal is to privatize all of these programs, including public education.

Working-class Americans should see this tax bill for precisely what it is: A brazen, naked grab to further enrich their corporate donors, while exacerbating the worst wealth-gap since the Gilded Age.

There is, of course, one sacrosanct sector of the budget that will remain untouched: The misleadingly named Department of “Defense.” In America we have plenty of money to drone-bomb civilians in foreign countries, but programs of social uplift like universal health care are deemed “politically impossible,” because we “don’t have the money.”

And where was Maine’s “moderate” Republican Sen. Susan Collins while this tax-heist was being rushed through…? Voting in lock-step with the rest of her party, naturally.

Indeed, the left in Maine needs to get over its infatuation with Sen. Collins. She is neither a “centrist,” nor a champion of working class Mainers. Sure, Collins is more refined in her speech and demeanor than many of her more outlandish Republican colleagues, including The Orange One. But she subscribes to the same right-wing, austerity-pushing agenda as the right. Pleading phone calls or editorials to Sen. Collins to “do the right thing” are a waste of activists’ time and energy.

The fact that this tax bill is extremely unpopular makes little difference to the Republican Congress. They just needed to pass something — anything!— for Trump to sign into law.

Nearly one year into Trump’s first term he has yet to pass a single piece of legislation. In fact, as of the end of August, Trump has taken three times as many vacation days as Obama — a fact made all the more hypocritical given Trump’s own criticism of Obama’s “excessive” use of vacation time back in 2011.

But Trump — who campaigned as a pseudo-populist, particularly in his opposition to “free-trade” deals — has revealed his true colors. The idea that a “Rustbelt Revolution” helped Trump win the presidency was always overblown. Trump’s primary base is made up of middle-managers, small business owners, and Americans making over $50,000 a year. (Those making under $50,000 a year tended to support Hillary Clinton — a contradiction in its own right, but one that deserves its own column.)

True, some blue-collar members of the so-called “white working class” defected from the Wall Street-captured Democratic Party to vote for Trump last year. But contrary to the media narrative, those voters were the exception — not the rule. Trump supporters are largely members of the elite or what Marx and Engels termed the “petit bourgeois.” And this tax bill was a naked giveaway to them.

So much, it seems, for “draining the swamp.”

The bourgeoisie has tried to con the working class with the lie of “trickle down” economics for the last 40 years now. But, while many working-class Americans now see through this foolish nonsense, they remain uncertain how, precisely, to resist these right-wing policies. A year after Trump’s shocking election the left remains paralyzed.

Yet, Trump’s presidency was initially met with inspiring acts of mass resistance, including the single largest day of protest in U.S. history — the Women’s March on Washington. We need to reorganize and rediscover that radical sense of working-class strength and solidarity.

In the meantime, however, we have just been viciously robbed. And, as in the case of any trauma, it will take some time to both fully absorb and recover from this latest assault.