Fascism In a Cape 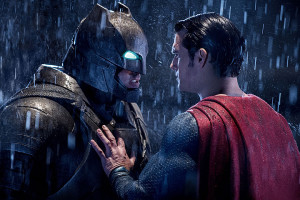 The release of the long-awaited superhero-crossover, Batman v. Superman: Dawn of Justice — and the barrage of negative reviews it has received from critics — recently inspired me to revisit the film’s source material: Frank Miller’s landmark 1986 graphic novel, The Dark Knight Returns.

The innovative, widely-praised DC Comics miniseries finds an aging, bitter Batman returning to rid Gotham City of crime after a ten-year retreat into seclusion. Gotham has become a hell on earth in Batman’s absence. It is overrun by the anarchistic, youthful gang, The Mutants. The resurrected Batman now fears he can only defeat this savage new breed of evil by matching its brutality—perhaps even with lethal force.

Eventually, Superman, who is literally under the employ of the Reagan administration, is dispatched to rein in Batman, resulting in the gladiators’ epic showdown which constitutes most of director Zack Snyder’s two-and-a-half hour film.

In his review for the A.V. Club, critic A. A. Dowd calls Batman v. Superman an “airless and humorless superhero movie.” He likewise labels the battling protagonists (played by Ben Affleck and Henry Cavill, respectively), “epic bores.”

Yet, I was particularly struck by one specific line from Dowd’s review, in which he briefly attributes fascistic elements to Snyder’s superheroes.

“What Snyder sees in these characters is raw, herculean power, and little else,” he writes. “[H]e pushes them closer to abstract icons of fascist supremacy than they’ve possibly ever been pushed, either paying lip service to or outright ignoring the values they’ve always stood for.”

This begs a question that is perhaps hearsay for comic book fans:

Are superheroes — beings endowed with awesome, at times even God-like powers of destruction — inherently fascistic? At the very least, the politics portrayed in superhero comics and films (and let’s face it: all art is political) hew considerably closer to the right than the left.

Sure, characters like Superman and Spider-Man use their incredible powers “for good.” But what does this mean, really? Concepts of “good” and “evil” tend to be more complicated outside of the carefully plotted panels of a comic book.

Is Iron Man, for instance, a hero because he uses his armor-suit weaponry to fight evil—much like, say, Barack Obama allegedly uses drones more “responsibly” than George W. Bush did?

Superman and Batman are, at heart, vigilantes. Yet they are generally justified in their vigilantism because they are the “good guys.” But this logic sounds eerily similar to NRA vice president Wayne LaPierre’s idiotic “arm everybody, everywhere” argument, a few days after the Sandy Hook Elementary shooting in 2012.

Perhaps that is why Miller’s jaded, hardened Batman wields a rifle throughout The Dark Knight Returns—an act which likely shocked readers at the time, as Batman has traditionally vowed never to kill his enemies outright. But it’s cool, because Batman is a “good guy.” I mean, sure, Miller portrays the 55-year-old Bruce Wayne as an alcoholic, borderline sociopath with suicidal tendencies. And is it just me, or does his adoption of 14-year-old Carrie Kelly as the new Robin, seem more than a little pedophilic?

But he is a “good guy,” nonetheless.

And perhaps the most overlooked facet of Batman’s secret-identity alter-ego, Bruce Wayne, is not just that he is a billionaire one-percenter. It is that he is the chairman-heir of multi-industry conglomerate, Wayne Enterprises (also known as WayneCorp), which has holdings in electronics, aerospace, shipping, biotech, and entertainment. In true Rupert Murdoch fashion, Wayne Enterprises even owns the fictional Daily Planet newspaper, which Clark Kent reports for.

As such, it makes perfect sense that the chief targets in Batman’s crime-fighting spree are gangs and organized crime. (Nearly all of the villains in Batman’s rogue’s gallery — Two-Face, the Riddler, the Penguin, and the Joker to name a few — either head or are associated with criminal gangs.) They likely represent a significant threat to his financial holdings.

Forget about the traumatizing murder of his parents, so often referenced as the source of Wayne’s avenging quest for justice. He is really just doing what any good capitalist would do: Using brute force to protect his profits.

“[I]t should be no surprise that The Dark Knight Rises so firmly upholds the financial status quo,” Shoard writes.

Christopher Nolan’s film indulges in much guttural talk of the gap between the 99% and the 1%, but it’s the former who are demonized, whose revolting actions require curbing and mutinous squeals muting. Your average Joe, it turns out, requires a benevolent, bad-ass billionaire to set him straight, to knock him sideways, if necessary.

She goes on to call The Dark Knight Rises an “audaciously capitalist vision, radically conservative, radically vigilante, that advances a serious, stirring proposal that the wish-fulfillment of the wealthy is to be championed if they say they want to do good.”

Miller himself holds reactionary right-wing views, which are perhaps most evident in his Ayn Rand-inspired, Martha Washington graphic novel series. Miller received fierce backlash for a scathing (and mostly ranting) blog post attacking Occupy Wall Street protesters in 2011. In the post, from Miller’s personal blog, he called the protesters, among other things, “a pack of louts, thieves and rapists . . .”

Sounding more than a little like Donald Trump, he writes:

“Wake up, pond scum. America is at war against a ruthless enemy. In the name of decency, go home to your parents, you losers. Go back to your mommas’ basements and play with your Lords of Warcraft [sic]. Or better yet, enlist for the real thing. Maybe our military could whip some of you into shape.”

While Miller’s conservative politics seem to be (mercifully) something of an aberration among the comics industry generally, it does not alter the fact that the superhero genre is ultimately fueled by a Nietzschean “will to power” mentality. As author and socialist activist, China Mieville observed in a 2001 interview, the “underlying idea” of Dark Knight Returns is that “people are sheep who need Strong Shepherds.” This was a theme Dave Gibbons and Alan Moore tried to refute with their genre-bending, superhero deconstructing graphic novel, Watchmen–which was also turned into a film by Zack Snyder.

“Well, so what?” you say. “It’s just a movie–based on a comic book, for Christ’s sake! Why do you have to overanalyze everything, Marletta?”

Because, as I mentioned earlier, all art is inherently political. Even Hollywood blockbusters ostensibly designed for pure entertainment merely reinforce the status quo, as author Toni Morrison has observed. Such works reinforce what Marx and Engels called the bourgeoisie’s “ruling ideas” which govern our perception of the world. Consider that the filmmakers behind such deeply political recent films as Zero Dark Thirty and American Sniper have similarly tried to dismiss criticism of their works’ imperialist subtext with the convenient, “It’s just a movie,” excuse.

So the politics of Batman, Superman, and the myriad other superheroes that currently dominate popular culture matter. In fact, I would argue the crypto-fascist themes these works suggest are inherently incompatible with the worker-driven, “socialism from below” I have long advocated in this column.

In short, as Moore’s Watchmen suggests, we should not be looking for heroes — super-powered or otherwise — to save us. Rather, only the working class can bring about its own emancipation. As such, the superhero genre, to paraphrase Lt. James Gordon in the concluding scene of The Dark Knight, gives us the heroes we want right now, but not the ones we deserve.