The Failure of Identity Politics and the Case for Solidarity 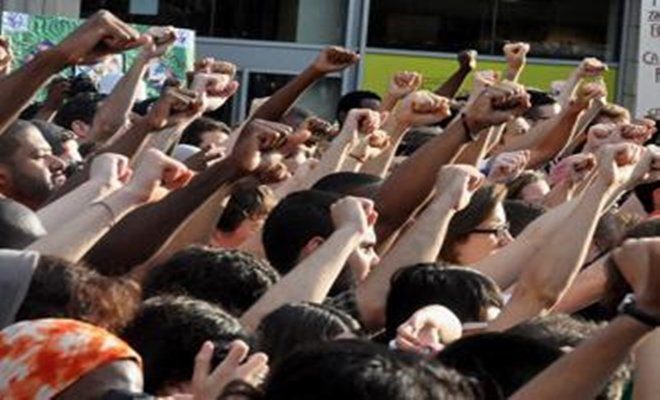 I maintain that one of the greatest obstacles to developing a mass, diverse working-class movement to fight not only the Trump regime, but also the system that spawned it in the first place, remains the scourge of identity politics.

This political orientation, along with its associated practices of “privilege-checking,” and “calling out,” has rendered the left atomized, devoid of a concrete political vision, and largely incapable of joining together in solidarity. Indeed, even that word, “solidarity,” is quite threatening to practitioners of identity and privilege-politics, who regard it as a sort of “whitewashing” of real inequities in race, gender, and sexual orientation.

The absence of a class-oriented approach to social justice, combined with a generally low-level of class-struggle (recent resistance to Trump’s election, notwithstanding), has allowed the nebulous, postmodernist dictates of identity politics to fill the void. As a result, in places like Portland the framework of identity politics has become the default orientation of left-wing groups.

According to liberal identitarians all white people are inherently — and perhaps, irredeemably — racist simply by nature of being white. And no amount of education, enlightenment, commitment to social justice, or personal growth can alter a “privileged” white person’s racist, prejudiced views. Thus, identity politics often casts White People or even just “whiteness” as the enemy of the oppressed, rather than the structural racism intentionally perpetuated by the wealthy elite.

As the great abolitionist, Frederick Douglass observed of the twisted genius of the capitalist ruling class in pitting white workers against black workers, “The slaveholders, by encouraging the enmity of the poor laboring white man against the blacks, succeeded in making the said white man almost as much of a slave as the black himself.”

“Both,” Douglass adds, “are plundered by the same plunderer.”

But this data is misleading. A majority of white Americans did not vote for Trump. A majority of the whites who voted did. This is a crucial distinction. Nearly 50 percent of eligible voters stayed home on Election Day or were barred from voting, entirely.

And, while racism no doubt played some role in Trump’s election, many of the working-class whites who voted for him did so out of legitimate economic grievances. As Jacobin’s Adaner Usmani puts it, “All Klansmen are Trump supporters, but all Trump supporters are not Klansmen.” It is crucial those of us on the left understand this if we are to have any hope of winning some of those working-class Trump supporters–many of whom voted for Barack Obama, at least once–to our side.

This is in no way meant to diminish the very real and insidious role of racism, sexism, and ableism in Trump’s electoral victory. It is merely to acknowledge that his ascension is more complicated to explain — his supporters’ motivations more complex and often contradictory — than the easy scapegoat of “racism” suggests.

Furthermore, it was the slave-owning Founding Fathers’ Electoral College which handed Trump the presidency — not the voters. If we lived in an actual democracy, where candidates were elected based on the popular vote (or, for that matter, if we had more than two candidates to choose from), Hillary Clinton would currently be sitting in the White House.

But practitioners of identity politics conveniently overlook all of these nuances, preferring a simplistic (and decidedly cynical) understanding of society and human nature as governed by nothing more than fear, hatred, and naked self-interest.

As such, Maine activist and blogger, Shay Stewart-Bouley, claims in a recent post on her “Black Girl in Maine” blog that a “fear of the declining value of whiteness is what brought us Trump.”

Stewart-Bouley goes on to admonish her white readers that people of color do not need their “white guilt” in anti-racism activism, only to then proceed to remind them that “racism is largely a white problem…”

But rather than explaining how white leftists can be better “allies” in the fight against racism, Stewart-Bouley echoes the familiar identitarian doctrine that black and white activists conduct their work in separate circles. This, she explains, is so white people can “have a space [of their own] to work out the kinks on their journey without harming me and other POC [People of Color].”

This insistence of separate spaces for black and white activists also flows from the identitarian concept that it is “not the job” of oppressed people to educate others. White progressives, in other words, must “do the work” of educating themselves.

“Seriously, I am not Oprah or Mammy,” Stewart-Bouley writes, “and for my own well-being, I want people to know what they don’t know and work on it without being expected to have their hand held by me while they do it.”

As someone who has worked (albeit, briefly) in education, I can assure you:

Dismissively telling students to “go educate yourselves,” with no additional guidance or direction from me as the teacher, is a surefire way to ensure the majority of them do not take the class seriously, spend the semester slacking off, and ultimately fail the course. And, when it comes to fighting racism, and building a viable, multi-racial, multi-gender, multi-ethnic working-class movement, failure, as they say, is not an option.

Telling people to “educate yourself” or “just Google it!” in response to legitimate questions about unfamiliar phrases, jargon, or histories, merely reproduces the neoliberal atomization of capitalism. That is, sit by yourself in front of a computer and figure it out alone. And this is to say nothing of the generally contemptuous attitude of telling people, “It’s not my job to educate you!”

Part of being a revolutionary means being willing to educate, discuss and patiently debate with others — even those who may not be as radical as you are. Reading, studying, and debating collectively are indispensable components to building a sense of solidarity, and coalescing around a unified, cohesive political orientation.

Contrary to the dictates of identity politics, just because an individual does not personally experience a particular form of oppression does not mean he or she has no interest in fighting to end that oppression. Indeed, the system of capitalism — a system that is inherently exploitative — oppresses all workers to some degree. The ruling class has its proverbial thumb on all workers — though it presses down with greater force on some particularly oppressed workers (African Americans, women, LGBTQ folks, people with disabilities), than others.

But all workers have an interest in cutting off the bourgeois thumb (if not, indeed, the entire hand it is a part of) and dismantling the system that keeps us all down.

As socialist author, Keeanga-Yamahtta Taylor writes in her 2016 book, From Black Lives Matter, to Black Liberation:

Solidarity is standing in unity with people even if you have not personally experienced their particular oppression[.] The reality is that as long as capitalism exists, material and ideological pressures push white workers to be racist and all workers to hold each other in general suspicion. But there are moments of struggle when the mutual interests of workers are laid bare, and when the suspicion is finally turned in the other direction—at the plutocrats who live well while the rest of us suffer.

None of this is to suggest that class is “more important” than race or other aspects of identity. Rather, as Karl Marx observed, class and race are inextricably intertwined.

“In the United States of America, every independent movement of the workers was paralyzed as long as slavery disfigured a part of the Republic,” Marx writes in Volume One of Capital. “Labor cannot emancipate itself in the white skin where in the black it is branded.”

The left must rekindle the old labor slogan, “An injury to one is an injury to all.” Only through solidarity — through a shared sense of class-struggle among workers of all genders, gender-identities, races, and sexual orientations — can we hope to fight the right, rebuild the left, and bring about nothing less than the self-emancipation of the working class.