The Revitalization of Congress Square Park

There is a new venue in town. Wednesday night concerts, Third Thursday art events, Friday night dancing with live music, Saturday morning activities for the kids, and Sunday night movies, are all free! Sounds awesome! What is this venue? It’s Congress Square Park! 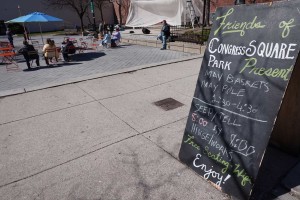 May Day at Congress Square Park.

Between 2013 and 2014 the City Council tried to sell the park to the adjacent hotel. At the time, public comment on the park was incredibly negative. Descriptions like “derelict,” “non-functioning,” “uninviting,” “foreboding,” “waste of space,” and “giant urinal” were used.

It has been a year since the park was saved from becoming a private ballroom, and there is no doubt that the formerly maligned public space is far from a “giant urinal” now.

To get there, it took a lot of TLC from a dedicated group, the Friends of Congress Square Park. Thanks to their efforts last summer the park was home to 35 events and over 9000 visits. This summer will be even bigger.

“We’ve been doing a lot of planning throughout the winter,” says David LaCasse, President of Friends of Congress Square Park.

The Friends group has big news. They were recipients of a grant from the Heart of the Community program led by Southwest Airlines and Project for Public Spaces.

“We’re in there with cities like Fort Meyers, and Milwaukee, and San Diego… then there’s little Congress Square in Portland, Maine.”

The grant will further revitalize the space through a combination of programming support and funding for a variety of physical amenities, such as tables and chairs, planters, an outdoor projector and movie screen, sound equipment, and art and game kiosks. 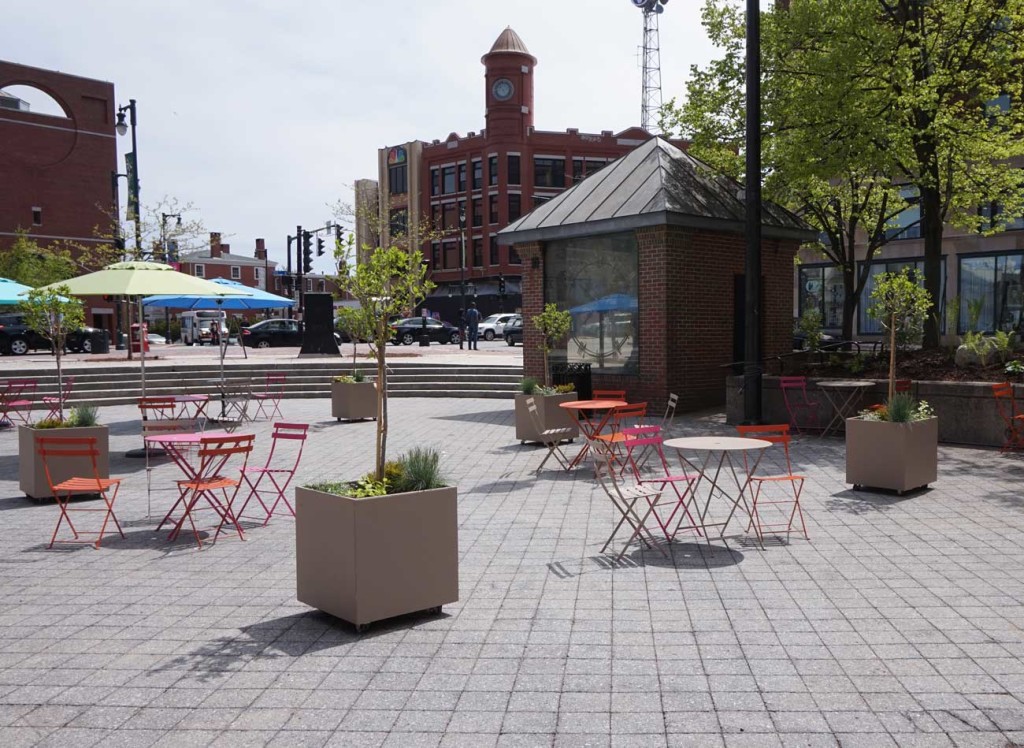 In addition, the grant comes with in-kind technical assistance from Project for Public Spaces, an internationally known space-making organization that has been around for decades.

The technical support will help Friends of Congress Square Park formulate suggestions on how to expand amenities and better use the location. There will also be data collected to see what does — and what doesn’t — work.

“[Project for Public Spaces’] approach, and our approach, is to try smaller, different things, and see what works. How can we make what is there better? So that when we do look at redesign we have a lot of data based on how the community wants to use it,” explained David.

This data would ideally help conceptualize the redesign that is slated for the entire intersection.

In the City budget, as recommended by the former City Manager, there is $75,000 earmarked for the Parks Commission. Some of these funds are intended for planning a redesign of the entire Congress Square intersection — including the park, the Museum of Art and its plaza, and everything in-between.

If all goes well, the final design would be done by end of year, so that public and private funding to perform the redesign could be sought in 2016.

If the City contributes $50,000 to help finalize the design, then the Friends of Congress Square Park will provide $25,000 in private money plus in-kind support from Project for Public Spaces.

“We’re coming to the table with a lot to offer,” said David.

He expects that with all that the Friends group has to offer, the City would be foolish not to chip in and make it happen.

The City, Friends of Congress Square Park, neighboring businesses and the whole community are coming together to make this summer the best ever for the park.

Visit the park anytime, or attend some of the over 70 planned events, and be part of the revitalization of Congress Square Park from “derelict” space to one of the hottest spots in town.