A reader responds to Bridget Chase’s coverage of the Portland pesticide and fertilizer task force. He maintains that colony collapse disorder is not a reason to ban pesticides. Contributor Bridget Chase responds below.

I am writing in regards to your latest piece about pesticides. I am a long time beekeeper and organic gardener, and I DO NOT support either the current effort in South Portland, where my family has had a home since 1974, or the ongoing one in Portland where I reside and keep most of my bees. I currently garden in both South Portland and Portland. 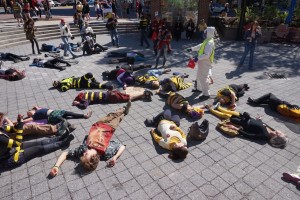 The South Portland efforts have attempted to hang their hats on a long debunked study regarding what the author called “colony collapse disorder”. CCD has been debunked by the EPA, the FDA, and beekeepers nationwide (goggle “debunking colony collapse disorder” and the articles are easily found). The author’s attempt to pin the blame for bee deaths on neonicotinoids was erroneous — the real blame fell squarely on the backs of mites, varroa and tracheal, as well as on poor hive maintenance and stress on commercial hives from being frequently moved around the country for pollination work.

A South Portland councilor who is a beekeeper blamed a hive death on pesticides, yet never had the Maine State Apiarist come to certify this cause of death. Since he is the only one who can legally do that, her claim is suspect and is more than likely mites.

The South Portland group has also claimed that children there have been poisoned by pesticides, and that South Portland residents have also “lost” gardens to pesticides. Neither claim can be substantiated through a public records examination.

I do not wish you to think that I am pro-pesticide — I am not. What I am is pro-truth. Rather than shove an almost unenforceable ordinance down people’s throats, I would prefer an education campaign to inform the public about pesticides, and to work to wean people away from their use where possible. Even beekeepers use miticides, a form of pesticides, to control mites. 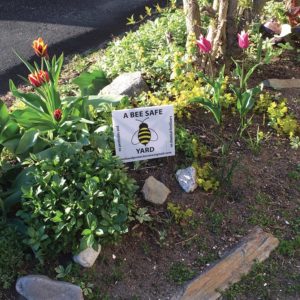 Bee safe yard signs are popping up in gardens throughout the West End.

The members of the task force represent a wide spectrum of opinions regarding the use of pesticides and fertilizers. Discussions at these meetings can get heated at times. The use of neonicotinoids is certainly one such topic. How to enforce a pesticide and fertilizer ordinance is another hot button topic.

What I see at these meetings is a group of people committed to the charge put before them by the City Council. The Council Order reads:

“…to review the draft pesticide ordinance under consideration in South Portland, ordinances in other jurisdictions, as well as scientific literature regarding the effects of pesticides on public health and the environment. The Task Force will also examine the use of chemical fertilizers in the City of Portland and study the impacts they have on the environment, particularly waterways including Casco Bay. Based on their findings, the Task Force will recommend to the City Council a course of action to minimize the environmental and health impacts of chemical pesticides and fertilizers.”

I am assuming your reference to a South Portland Councilor is Maxine Beecher, who is a beekeeper and gardener. She followed the protocol outlined by the Cumberland County Beekeepers Association to report a hive death. A master beekeeper examined her hive to determine the cause. The hive death was not attributed to pesticides or mites, and so had no relation to colony collapse disorder.

Your note that organizers in South Portland claim children are being poisoned by pesticides and that residents have “lost” gardens to pesticides are concerning claims that I was unable to substantiate. I contacted Fred Dillion, South Portland’s Stormwater coordinator and member of the pesticide ordinance committee, Councilor Maxine Beecher, Friends of Casco Bay, Portland Protectors and Save South Portland. In fact, Mr. Dillion and Councilor Beecher would appreciate you sharing this information with them.

Thanks again for sharing your thoughts on colony collapse disorder and the drafting of a Portland pesticide ordinance.