City operations seek to substitute grid power and fossil fuels with renewable power and fuels that produce less impact on the climate. 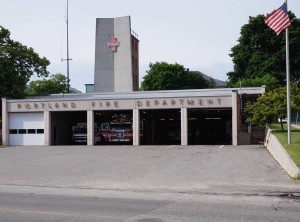 Bramhall Fire Station is a potential site for solar panels.

The City has released a public bid offering the rooftops of several facilities for projects that will generate electricity through solar power. The City seeks proposals that are as close to cost-neutral as possible and anticipates buying the generated power from the provider at or around market price.

Since 2010, Portland estimates that the City has reduced its costs from energy by 30% and its greenhouse gas (GHG) emissions by 16%. Power use has decreased by 400,000 kilowatt hours annually since 2010 (with the exception of the Jetport expansion) as a result of efficiency through more efficient lighting, sensors, equipment, and education.

Copies of the Request for Proposals (RFP) can be picked up in the Purchasing Office, Room 103, City Hall, 389 Congress Street, Portland, ME 04101. Proposals will be accepted until 3:00 PM on Thursday, August 6th of this year.

Mandatory pre-proposal site visits are scheduled for 9:00 a.m., Thursday, July 16th. Please meet at the Portland International Jetport, 2nd floor conference room in the old terminal. Transportation will be provided to visit each of the sites. Prospective bidders must attend this pre-proposal site visit in order to submit a proposal for this project.

For more information on open City of Portland bids/RFPs, visit the City’s website.