Here is a brief look at some of the more contentious issues in the recently passed $222 million city budget. 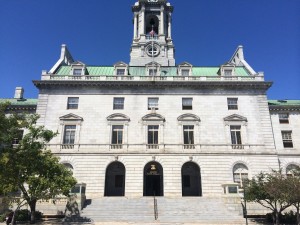 A 35-cent hike for city trash bags was passed bringing the cost per 15-gallon bag to $1.35. Residents have three months to use up the old bags, or trade them in for new ones — and pay the additional fee.

The legislature will stop helping Portland pay for General Assistance (GA) to asylum seekers who need emergency housing and food. The Council voted 5-4 to fully cover the cost locally for the entire year for people already receiving GA as of June 30, 2015. It does not provide assistance for anyone who applies after July 1st. The intent is that eventually the 900 plus asylum seekers currently receiving GA in Portland will receive permission to work and get jobs and no longer need assistance within the year.

Councilors Jill Duson, Jon Hinck, Nick Mavadones, and Ed Suslovic voted against, preferring a similar proposal that would have provided the funding for six months instead of the full year.

The total cost to the City to provide GA will be about $5.2 million — about 2% of the overall budget.

The budget eliminated 23 full-time jobs, 14 of which are currently filled, meaning layoffs. The majority of cuts come from Public Health and the Fire Department.

The budget will fund a part-time Bicycle and Pedestrian Program Coordinator. This position advocates for and helps plan bike and pedestrian infrastructure.

The budget includes a response to the tragic fire on Noyes Street that left six dead last November. A new Housing Safety Office was created at the cost of $600,000. It is funded by new landlord registration fees. The Housing Safety Office is meant to centralize and improve the City’s code enforcement activities.