Hi folks, some of you may already know me from my column with The Portland Sun, my blog for the Bangor Daily News, my (failed) city council run last year, or just my general hijinx around town for the past 30+ years. To those of you still saying, “Nope, I don’t know this dude,” allow me to introduce myself. My name is Chris, I’m a thirty-one-year-old lifelong Portlander, and I’m really excited about this new column. Things are changing for this newspaper, and the other people on board–from top to bottom–are all really excited about the opportunity to be a part of The West End News rebirth.

Beer and Coffee will be a Q/A column with a focus on cool Portlanders doing cool things, which should make my task of finding subjects very easy, because there are a lot of awesome people in this city doing amazing things for our community. 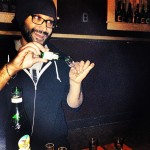 For my first column, I’ll be interviewing an old friend of mine named Shahin Khojastehzad, a 2003 graduate of Deering High, and co-owner of local favorite (and world renowned) Novare Res Bier Cafe. He’s piloting an online campaign to get none other than comedian/actor/legend Bill Murray to Portland for Maine Beer Week in November.

He’s rounded up all his local brewing buddies, and got them all to commit to creating their own unique Bill Murray inspired beers. He’s created waves in the local media with his efforts, and given the campaign its own hashtag: #billmurraybeerweekme.

I caught up with Shahin at Novare Res earlier this week, here’s what he had to say about the whole thing:

CS– How did you come up with this idea?

SK– Wanted to shake up Portland Beer Week and make this social experiment happen! This unifies our scene and to be honest, Bill Murray is fucking awesome! Months ago a bunch of Novare employees we’re hanging out after work and started the debate, “If Bill Murray was a beer what would he be?” We came up with some gems: Gosebusters, Pils Murray, Zissou Oyster Stout, Buffalo Roam Rauch, Rushmore Red, Darjeeling Jasmine IPA, Etc!! We mainly want this to be a Gonzo campaign of weirdos who love beer and Bill!

CS– Are you surprised by all the support and excitement this idea has seen in the local media and community at large?

SK-Yes, very surprised and grateful to see the support for Maine’s beer scene. It’s nice to see all these brewers/bars come together and this campaign is catalyst for Portland Beer Week.

CS– You said all proceeds will go towards a charity of Murray’s choice, where do the proceeds come from? 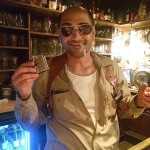 SK– The proceeds come from the sale of Bill Beers.

SK-Bill hasn’t responded yet so we don’t know what charity he would like to donate to.

CS– And what happens to the proceeds if Murray doesn’t show?

SK– If he doesn’t show and doesn’t choose a charity, then we operate as usual.

CS– You’ve been able to get a lot of support from other local breweries, do you think that has to do with the togetherness of the regional brewing community? Or is it because Murray is just such a rad dude?

SK– I think it’s both, there’s a lot of camaraderie amongst Maine brewers and these guys are getting excited by others people’s beer names and which motivates them to make an even more bad ass beer concept.

SK– Ghostbusters, Venkman, “Viggy…Viggy…Viggy, you have been a bad monkey.”

CS– You’re known around town as a pretty rad dude yourself, what do you think you’d say to Murray if you got to serve him a Bill Murray beer?

SK– I would say that’ll be 5 bucks! Just kidding, I’d probably just shit my pants or simply give him a high five!

SK– I hope so. If not, it will be fun drinking world class beers with good friends. We’ll all still love and respect Bill Murray!

Fire in the hole, Bill, the balls in your court.