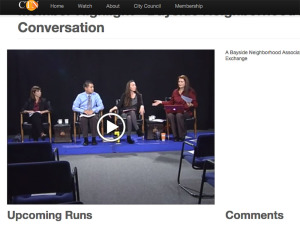 The event was a response to recent controversy. Bayside residents were alarmed when they found resealable plastic baggies filled with a white powder discarded in their neighborhood. The baggies were from the Needle Exchange, and the powder was Vitamin C, used in preparing crack cocaine for injection.

The Needle Exchange, a program of the City’s Public Health department located in the India Street Public Health Center, quickly changed their practice. They ditched the resealable baggie and started handing out single use Vitamin C packets, ordered from the United Kingdom for six-and-a-half cents each. The controversy, though, already ignited the neighborhood, whose residents remained concerned over discarded needles.

“I see far too much exposure [to needles], in far too confined of an area,” said Bayside resident Steve Hirshon.

Laura Cannon, an active Bayside Neighborhood Association member, organized the forum to give Bayside residents a chance to submit questions about the Needle Exchange. Cannon’s goal was to open dialog between the City program and residents, and to share important information.

“All we have are anecdotes… Data, in Portland, could really help move the conversation forward,” said Cannon.

Unfortunately, there is no local, city data to demonstrate the Needle Exchange’s effectiveness.

“We have to be here, as a safety-net service,” said Zoe Odlin-Platz, Community Health Promotion Specialist, who manages the day-to-day functions of the program. Odlin-Platz pointed out, as a measure of success, that the Needle Exchange took in more needles than they handed out.

Steve Hirshon agreed that the Needle Exchange was a safety-net, reducing risk for the population who use their services, but he wanted to know: “What about the rest of us?”

Bayside Neighborhood Association is asking CTN 5 to air their conversation with the Portland Needle Exchange on cable channels 2 and 5. The event was filmed on Wednesday, October 22nd, and is currently available for viewing online at ctn5.org.

If you find needles, call the Department of Public Servies, 207-874-8493, and a trained specialist will clean up the area.