Baltimore and the Fire Next Time 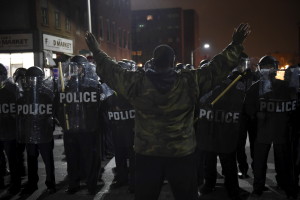 A demonstrator raises his arms as he faces law enforcement officers near Baltimore Police Department Western District during a protest against the death of Freddie Gray in police custody, in Baltimore.

The blanket condemnation of the rioting in Baltimore, coupled with white America’s tone-deaf silence on the mounting police killings of unarmed black Americans reveals a stark truth about this country: We value businesses and property more than the lives of black people.

Welcome to America under late-stage capitalism.

This hypocrisy was on full display in President Barack Obama’s condemnation of the Baltimore protests in the wake of the police killing of 25-year-old African American, Freddie Gray.

Speaking at an April 28 press conference, Obama said there is “no excuse” for violence. This from a president who is currently engaged in seven wars, and has authorized the killing of at least two American citizens. He then sanctimoniously called on the nation to engage in some “soul searching.”

Indeed, the president’s remarks call to mind the famous scene in Stanley Kubrick’s Dr. Strangelove, where Peter Sellers’ President Merkin Muffley admonishes his squabbling advisers, “Gentlemen, you can’t fight in here! This is the war room!”

The anger that has erupted in Baltimore has been building up for decades. It is the frustration of a neglected, underserved community where constant police harassment, oppression, and violence is a daily concern for black residents. The discontent on display in Baltimore is the legitimate anger of an oppressed people desperately attempting to assert their humanity. It is the anguished cry of the dispossessed.

A riot, Dr. Martin Luther King, Jr. observed a generation ago, is the “language of the unheard.”

“And what is it America has failed to hear?” King asked in one of his lesser known speeches. He answered:

Like Ferguson, MO, Baltimore is a microcosm of our nation’s racial disparities.

African Americans make up 63 percent of Baltimore’s residents. They are over 5.6 times more likely to be arrested for marijuana possession than white residents, despite the fact the groups use the substance at comparable rates, according to a recent report by human rights lawyer, Bill Quiqley. Nearly a quarter of the city’s residents live below the official poverty line, with unemployment rates for black residents double that of whites. And there is a 20-year life expectancy difference between “those who live in the most affluent neighborhood in Baltimore versus those who live six miles away in the most impoverished,” according to Quigley.

The corporate state has shown its hand when it comes to dealing with peaceful protests. (And on the whole the Baltimore protests have been largely peaceful, the media’s fixation on the few instances of rioting and rock-throwing, notwithstanding.)

Rather than responding to the ongoing spate of racially-targeted police murders by imposing meaningful, systemic changes to the nation’s police forces (a process which should focus less on body cameras and more on disarming the police), the state has responded with brute force. It is the same way it responded to similar uprisings in Ferguson, Oakland, and Zuccotti Park.

“If you want a vision of the future,” George Orwell wrote prophetically in 1984, “imagine a boot stamping on a human face–forever.”

What most Americans have intuitively understood for years, is now laid bare for all to see: The corporate state and the clueless elites at its helm are devoid of credibility. Capitalism–and the inherent racism, sexism, imperialism, and environmental destruction that it naturally results in–has utterly and irredeemably failed the majority of working class Americans. Revolution is our only recourse remaining.

“They tell me it’s a new gang in town,” says rapper Kendrick Lamar on the song “Hood Politics,” from his masterful new album, To Pimp a Butterfly, “from Compton to Congress.”

Lamar then proceeds to compare the country’s two political “gangs” to the real-life gangs that, in an ironic twist, recently put aside their decades-long feud to unite in opposition to Gray’s death.

…Ain’t nothing new but a flu of new DemoCrips and ReBloodicans/Red state versus a blue state, which one you governin’?/They give us guns and drugs, call us thugs/They make it [their] promise to f@#! with you/No condom, they f*&$ with you/Obama say, “What’d it do?”

Those who would condemn the “violence” of the Baltimore protesters are the same “apolitical” Americans who cheer jubilantly every time an army service member struts onto a football field. They are the same majority of Americans (53 percent) who believe Boston Marathon bomber, Dzhokzar Tsarnaev, should receive the death penalty. And they are the same Americans–both conservatives and liberals–who enthusiastically support the United States’ imperial drone wars–of which people of color are the primary targets.

So please, do not lecture the black community on the ethics of violence. Rather, we should stand with them in solidarity.

We must, in the words of James Baldwin, demand the impossible. As Baldwin wrote in The Fire Next Time, “If we do not now dare everything, the fulfillment of that prophecy, re-created from the Bible in song by a slave, is upon us: God gave Noah the rainbow sign; No more water, the fire next time! “