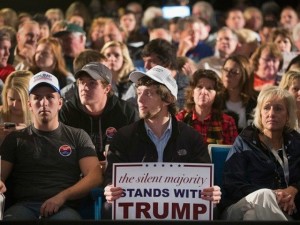 Voters supporting Donald Trump at the Iowa caucus on Feb. 1, 2016.

With Donald Trump inching ever closer to securing the Republican nomination, Americans — liberals and more than a few conservatives — are becoming increasingly frightened by the prospect that he could in fact become the next president of the United States. No doubt, they are right to be frightened.

While Trump is not, strictly speaking, a fascist, the sexist, racist, xenophobic fear-mongering he seems to conjure up every time he opens his mouth is nonetheless disturbing. And this is to say nothing of his Randian, dog-eat-dog worldview, wherein each individual is responsible for him or herself, society be damned. Combine this arrogant, bourgeois attitude with his supporters’ increasing penchant for violence, and you have a potently toxic mix.

At the very least, we should be weary of the growing right-wing populism Trump has stirred up and its echoes of past totalitarian states. Even if Trump loses the election, or is denied the nomination at the Republican convention, I fear the misdirected working-class anger he has inspired will not vanish along with his campaign. It will merely go back underground where it will continue to seethe and fester.

But we should be equally frightened by a Hillary Clinton presidency.

As a U.S. Senator and Secretary of State, Clinton pursued savage neoliberal policies — no different from those of her husband — that similarly targeted the poor and people of color. Likewise, her hawkish foreign policy would make Barack Obama look like the champion of peace his liberal supporters continue to delude themselves into believing he is.

Indeed, the only discernible difference between Trump and Clinton is that the former openly and candidly tells his supporters exactly what he believes and what he stands for. Who can really say with any certainty what the latter stands for . . .? Other than, of course, the obvious: Power, prestige, status, and wealth.

“[T]he history of power politics is nothing but the history of international crime and mass murder,” philosopher, Karl Popper wrote. “. . . This history is taught in schools, and some of the greatest criminals are extolled as heroes.”

While it is tempting to dismiss Trump’s supporters as racist, sexist, gun-loving anti-intellectuals (and certainly many of them are all of those things), the left does itself no favors by merely laughing off Trump’s evident appeal with a large section of mostly working-class voters.

As Salon cover editor, Jacob Sugarman points out in a recent piece, Stephen Colbert and John Oliver’s nightly takedowns of Trump, no matter how humorous, have done little to actually stop his ascent as GOP frontrunner. “That these [late-night hosts’] routines have left Trump unscathed,” Sugarman writes, “is a testament not only to the insularity of their audiences but the slipperiness of their subject.”

In fact, the left should not be so surprised by Trump’s popularity. Given the aftermath of the 2007 Great Recession and the still anemic “recovery,” it should have been completely predictable.

Even before the recession began, blue-collar workers — particularly white working-class men — saw liberal politicians send their manufacturing jobs overseas, never to return. President Bill Clinton’s North American Free-Trade Agreement (NAFTA) gutted the nation’s manufacturing sector. With the loss of their traditional vocations, many of these Americans struggled with unpredictable contract jobs where the work is hit-or-miss and the benefits nonexistent. Others simply applied for disability or were forced into retirement.

As Nicole Colson observes in the March issue of the Socialist Worker, “Trump is gaining a hearing precisely because of the steady deterioration of living conditions for the vast majority of people in U.S. society . . .”

. . . In this kind of climate, racism, immigrant bashing and Islamophobia are easy answers for the likes of Trump—a blunt instrument to get those at the bottom blaming each other. Trump asks why America isn’t “great” anymore because he has an answer ready: It’s the fault of those people—and not only the easy scapegoats, but political leaders who won’t deliver. [Italics hers.]

These conservative Americans feel they have had political correctness forcibly shoved down their throats. (And by “political correctness,” I am not merely referring to their inability to use overtly sexist or racist language in public, but also the left’s increasing tendency to viciously “call out” their own comrades if they inadvertently say the wrong thing.)

They view liberal concepts like multiculturalism, identity politics, and postmodernist thought that erases traditional norms and truths they consider sacred with deep suspicion and scorn, if not outright hostility.

These “badly educated” Americans feel, as leftist writer, Richard Rorty put it in his book, Achieving Our Country, that they have had their “manners dictated to them by college graduates.”

This is certainly not to condone their cultural insensitivity and intellectual narrow-mindedness — merely to understand where it comes from.

Mother Jones’s Kevin Drum, though he insists conservatives “built the monster named Trump, not liberals,” nonetheless makes a good point: “Donald Trump is basically telling ordinary people that ordinary language is okay,” he writes in a Jan. 4, 2016 article, “and since that’s the only language they know, it means they feel like they can finally talk again.”

The unfortunate truth is the left has lost these working-class people — not just as voters, but in the broader scheme of class struggle. Many of Trump’s supporters are blue-collar, lower-class Americans. They are the poor, disenfranchised citizens liberals claim they care about and support. They know, firsthand, the struggles of the working class. They live them every day. These people should be on our side, fighting for socialism alongside us.

In fact, not that long ago, they were doing just that.

Impoverished red-states like Kansas and West Virginia were once the focal point of labor uprisings and radical activism. Blair Moutain, in Logan County, West Virginia was the site of the largest labor uprising since the Civil War. More than 10,000 armed coal miners occupied the mountain in late August to early September 1921 in response to the coal industry’s malicious efforts — including the assassination of key labor leaders — to break up the mining union. The army and the police were eventually called in to quell the uprising, killing 100 strikers and arresting 1,000 others. The Battle of Blair Mountain, like so much of our nation’s radical history, is virtually unknown to most Americans today.

Now, nearly a century later, states like West Virginia have veered far to the right. They have traded the populist rhetoric of Mary “Mother” Jones for the anti-government/anti-intellectual ramblings of Sarah Palin.

This is not to suggest these working-class Trump supporters cannot, eventually, be won back to leftist thought. Nor am I suggesting that, lurking deep down inside every Trump supporter, is a raging left-wing radical, simply waiting, through the right amount of education, to be freed.

But for the time being, they are lost to us. And the bankrupt liberal class and its support for neoliberal policies that savaged the working class, is largely to blame for their defection.

“The Democrats are playing a very dangerous game by anointing Hillary Clinton as their presidential candidate,” Chris Hedges writes in a recent Truthdig column. “She epitomizes the double-dealing of the college-educated elites, those who speak the feel-your-pain language of ordinary men and women, who hold up the bible of political correctness, while selling out the poor and the working class to corporate power.”

Liberals betrayed the working class, and the success of Donald Trump’s presidential campaign is an expression of that betrayal. And the left’s refusal to face up to this harsh truth only ensures the assault on the working class will continue.

“America’s chickens,” in the prophetic words of Rev. Jeremiah Wright, “are coming home to roost.”