Posts
Home Featured Commentary Why I Am a Socialist

Why I Am a Socialist 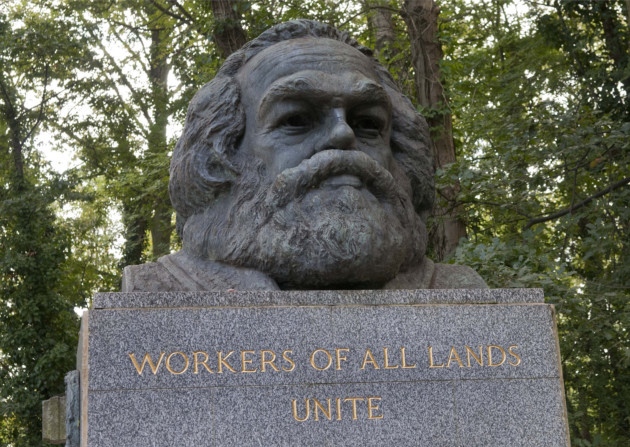 The iconic Karl Marx memorial at Highgate Cemetery in London.

The reports of socialism’s death, to paraphrase Mark Twain, have been greatly exaggerated. Perhaps you did not get the memo, but Marxism is back.

The “spectre of Communism” Karl Marx and Friedrich Engels wrote about in The Communist Manifesto in 1848 is once again haunting the wealthy bourgeoisie. They should considered themselves sufficiently warned.

The Great Recession, the widely unpopular Wall Street bailouts and interminable wars for empire, the staggering and unprecedented cost of a college education, the decimation of full-time, well-paying jobs, and the widespread realization that the so-called “American Dream” is increasingly out of reach for most workers, have led many Americans to seek out an alternative to a “free market” capitalism that has utterly and incontrovertibly failed the majority of citizens.

A majority of Americans 18-29-years-old view socialism more favorably than capitalism, according to a 2011 Pew research poll. At least 47 percent, the same study found, have a negative view of capitalism. (Americans overall still oppose socialism, 60-31 percent.)

While it is not entirely clear how these young respondents specifically define “socialism” (and Bernie Sanders deserves some of the blame here for promoting a decidedly watered-down, ahistorical version of “democratic socialism,” which amounts to little more than a Scandinavian-style welfare state), the fact that the decades long stigma surrounding the “S-word” has finally begun to wear off should at least be seen as a significant starting point. If Sanders can at least get American voters excited about socialism before his campaign inevitably implodes–and, at the very least, he has so far succeeded in doing that much–perhaps those of us on the left can continue the conversation on what socialism is–and is not–with the hundreds of new converts Sanders has inspired.

Socialism is, in essence, the self-emancipation of the working class. It is the revolutionary idea that the workers whose labor drives all of society should democratically own and operate their offices, factories, store-fronts, and workplaces. Socialism, furthermore, seeks an end to war and imperialism as well as sexism, racism, homophobia, and ethnocentrism as these are all inevitable though often unacknowledged byproducts of capitalism.

“A thousand years they had the tools/We should be takin’ ’em,” raps Rage Against the Machine’s Zack de la Rocha on the song, “Down Rodeo.” “Fuck the G-ride/I want the machines that are makin’ ’em.”

The greatest failure of the American left has been its abandonment of revolutionary socialism in favor of the tepid reforms and low expectations of traditional liberalism.

Though much of this country’s own history of socialism has been savagely expunged from high school history textbooks, the fact is socialism held great populist sway for working class Americans, particularly in the years following the Great Depression. Celebrated authors like John Steinbeck, Upton Sinclair, Jack London, F. Scott Fitzgerald, and Sinclair Lewis used their novels to masterfully showcase the struggle and exploitation inherent under capitalism.

Socialist Party candidates like Norman Thomas and Eugene Debs, though they never held any elected office, nonetheless proved extremely popular among voters. In 1920, Debs received close to one million votes from prison, after being sentenced under the Espionage Act for protesting U.S. involvement in World War I.

But the U.S. government’s Communist purges and the two “Red Scares” effectively silenced and expelled most of the radical leftists from politics and culture. By the end of World War II, all of the traditional outlets of left-wing ideas– the universities, the press, art and culture, labor unions–had been hollowed out and subsumed by the corporate state.

In the place of radical leftist politics and the rhetoric of class struggle, the left has succumbed to the petty minutia of identity politics, political correctness (which, today, takes its form in the obnoxious, self-righteous practice of “privilege-checking,”), and the incoherent, organization-be-damned activist approach Jacobin editor, Bhaskar Sunkara, has labeled, “anarcho-liberalism.”

And contemporary liberals remain tied at the hip to a Democratic Party that cares nothing about the poor and working class. President Barack Obama has only furthered the assault on the working class begun by Bill Clinton–first in the form of the North American Free-Trade Agreement (NAFTA) in 1993, and now in the likely passage of Obama’s Trans-Atlantic Partnership (TPP).

While many liberal activists persist in the belief it is possible to “take over” or “reclaim” the Democratic Party simply by electing enough “honest” progressives to Congress, history has demonstrated time and again the party establishment’s adeptness at squashing and ultimately absorbing those efforts back into its own ranks. (See: the presidential campaigns of Dennis Kucinich, Jesse Jackson, and Howard Dean for further evidence of this trend.)

Furthermore, this misguided approach looks to individual Democratic candidates (like Sanders) or Congress members to influence the party, while ignoring the larger corporate structures that actually control it.

As socialist author, Lance Selfa, observes in his essential 2008 book, The Democrats: A Critical History:

The question remains: Can progressives take over the Democratic Party…? To answer that, one has to consider that the Democratic Party really represents one of two parties of corporate rule in the United States. Despite its name, it is not a democratic organization whose members control it. So any activist or trade union or popular attempt to take it over always faces a counter-attack by the people who really control it–big business interests, who will use every underhanded trick in the book to maintain their hold.

“They may tolerate the party’s left tail,” Selfa continues, “but only insofar as it helps sweep in more voters.”

No, the Democrats will not save us. Only a worker-driven revolutionary movement–what Hal Draper described as “socialism from below”–can constitute the true self-emancipation of the working class.

I, for one, am not interested in minor reforms. The stakes–which include the very fate of the human species–are simply too high. The time for reforms is long over. We must radically alter the way we live, the way we work, and our relationship with the planet. In short, we need to destroy capitalism and build an entirely new, healthier, peaceful, less oppressive society from its remains.

This is a daunting task, to put it mildly. Many, I suspect, would deride it as impossible. But we must, in the words of James Baldwin, demand nothing less than the impossible.

“Let the ruling classes tremble at a communist revolution,” Marx and Engels concluded The Communist Manifesto. “The proletarians have nothing to lose but their chains.”

Working people of all countries, unite!