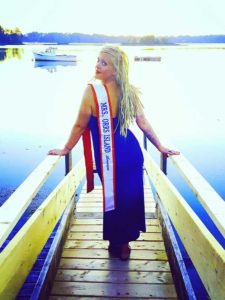 Together with her husband, and former West End City Councilor Dave Marshall, they own and manage a small in-home studio and art business on Orr’s Island, Harpswell Islands Studios, and manage a multi-unit building in the West End.

“Whitley Marshall is a beautiful and talented woman with an amazing life story. It is so exciting to be her number one fan in her role as Mrs. Orr’s Island,” says husband David Marshall.

Mrs. Marshall was unexpectedly thrown into homelessness at the age of 19. She made only $50 a week  teaching Sunday school and a train-to-teach self-defense class. Meanwhile, she was couch-surging and camping to avoid staying at the adult shelter. At the time there was no women’s shelter, and there weren’t enough beds at the teen shelter for anyone over 18. 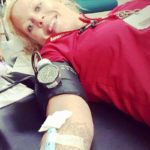 She was fortunate to land a life-changing job just six months later. In July of 2005 she began work as a phlebotomist for the American Red Cross. She still works there today, 13 years later.

“I am wholeheartedly committed to use this year of service to continue to raise awareness, advocate, and support the basic needs of all living things, with a focus on promoting the need for life-saving blood products, blood donation, and support services, as physical, social, and ecological health are inextricably linked,” says Mrs. Orr’s Island Whitley Marshall.

More on the pageant…

Mrs. Maine contestants must be women who are US citizens over the age of 18 and married. The state winner will represent Maine in the Mrs. America Pageant in Las Vegas, Nevada in August 2019. In addition, the winner will participate and volunteer in numerous statewide events over the course of the following year and will promote their platform of choice.