When City Council Fails: A Look at the Ballot Initiative Process

Citizens of Portland have a powerful instrument in their democracy toolbox: the direct initiation of legislation, or the ballot “initiative.” Of recent years, there has been a ballot initiative craze. Portlanders have proven an easy readiness to exercise this powerful process. 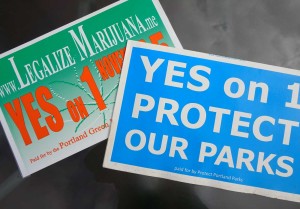 In 2010, when the Charter Commission declined to include non-citizen voting in the City Charter, residents collected thousands of signatures to put the issue on the ballot. It was narrowly defeated.

In 2011, a group called Sensible Portland was started by the Portland Green Independent Party to collect signatures to make marijuana laws the lowest enforcement priority.

After the City Clerk invalidated over 700 signatures, that initiative petition fell short of the 1500 signature threshold by about a hundred. Still, the City Council could have put the issue on the ballot, but they chose not to exercise their power.

At the time, then Mayor Nick Mavadones stated that the 1400 validated signatures did not represent a significant portion of the Portland electorate. 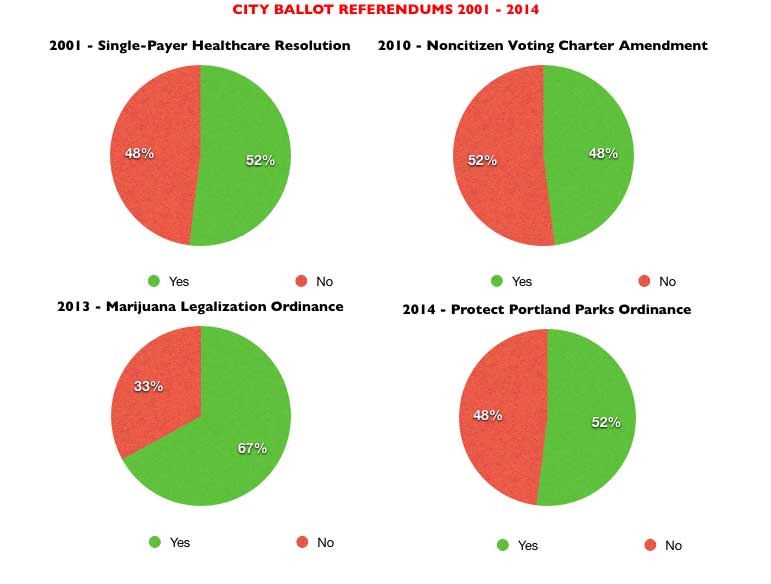 In 2013, Portland Greens were back at it, and along with the Marijuana Policy Project and the ACLU of Maine, they put a successful legalization effort on the November ballot. Apparently there was a significant portion of the electorate — nearly two-thirds — that wanted marijuana policy reform.

Most recently, in June of 2014, Protect Portland Parks fought the City and won with their parks initiative — making it more difficult for the City to sell parks.

The ballot initiative craze continues this year, as Greens are collecting signatures to raise the minimum wage to $15 per hour.

The future will likely see more initiatives. Advocates and activists are discussing bringing forth issues such as: citizen review of the Police Department, tenants’ rights, banning pesticides, restrictions on the number of downtown chain businesses…

It seems that Portlanders are more than happy to take the issues they care deeply about directly to the people. 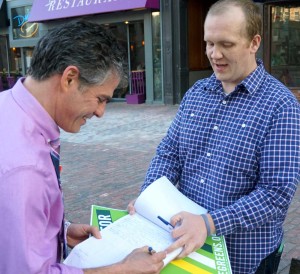 When City Council fails to act

Tom MacMillan volunteered for each of the above mentioned initiatives, and has led some of them.

“The referendums we have had [in recent years] are on issues that either the City Council has messed-up majorly on, like the Parks initiative… or they are things that the City Council just won’t discuss otherwise, like marijuana legalization,” Tom says.

Of course, sometimes those in power just don’t listen.

The parks initiative began when the City tried to sell a large part of Congress Square Park to the Westin Hotel. Citizens fought the sale and the process that led to the sale. The City Council ignored polls and hours of public testimony to side with the developers.

“The referendum is a blunt instrument…” says Tom MacMillan.

“You can vote it up or down, and every individual is allowed to make their own decision. It is much more democratic than leaving it in the hands of a few lawyers and lobbyists, which is basically who the City Council and the people who we’ve elected listen to,” believes Tom.

“I think there is a movement worldwide for more grassroots democracy,” he continues.

“Ultimately the people who vote on referendums are the ones who have to live with the laws. The consent of the govern is a basic philosophy that Americans hold true.”

Representation is also a basic tenant of American democracy. The drafters of the Constitution wanted to avoid the potential tyranny of the majority, and they set up a system of representative democracy so that informed leaders can craft compromises and come to decisions that take into account the minority opinion.

According to Tom and others this system doesn’t always work. 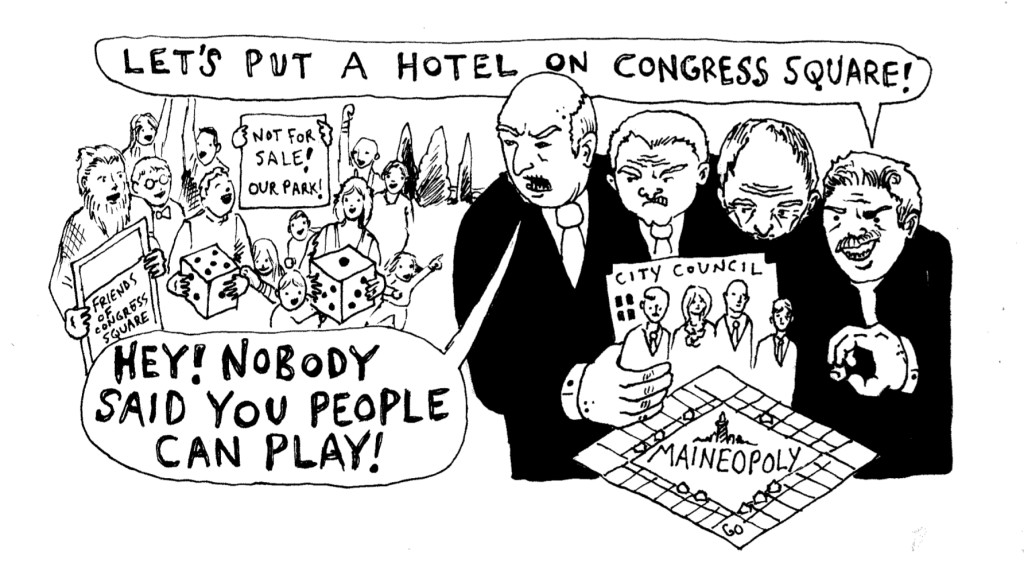 Cartoon by Will Hessian

“When the City Council makes a law, they say, ‘Well, if you don’t like it, just vote out the City Councilors,’ but that process is very long and difficult, and very imprecise. I feel that more direct democracy is a good thing,” says Tom.

David LaCasse believes that the initiative process, although difficult and not something to be relished, is a positive and effective democratic tool.

“Clearly it was the right choice [for the parks initiative]. It did a lot of good things for the City…” says David.

Maybe the initiative process is a peoples’ end-around of City Council. Regardless, it can work out for the best. Sometimes on the other side of the scrimmage line there is a touchdown.

David LaCasse is now President of the Friends of Congress Square Park, and he says that the organization has a great relationship with the City. Together, the people and the City Council are working towards a better park: redesigned, with events programing and improved amenities. Look for the June issue of the West End News for more on these efforts.