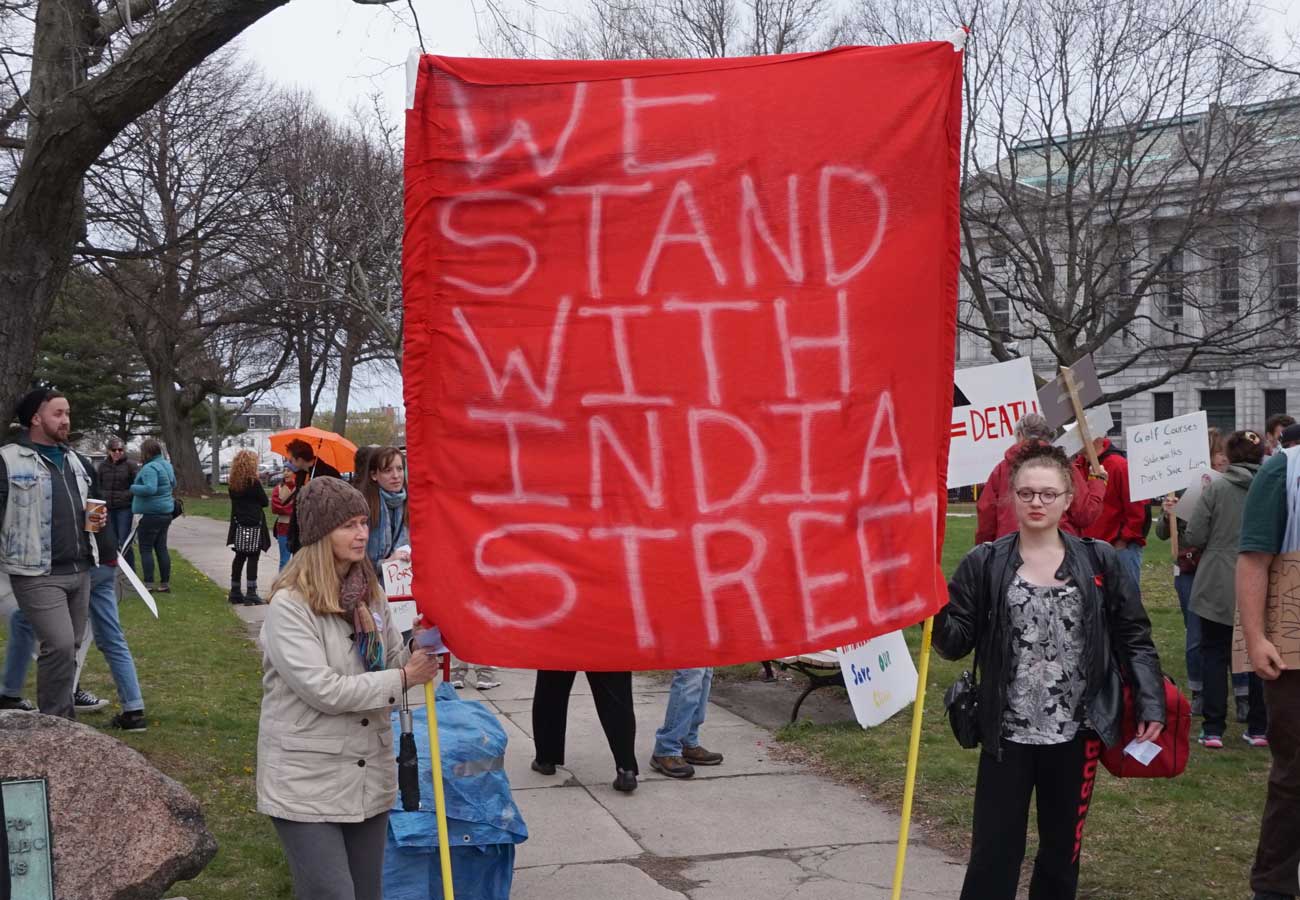 Activists rally to save the city-run India Street clinic on May 2, 2016.

The Portland City Council’s recent vote to close the majority of services at the city-run, India Street Public Health Center was a blow to activists and health care professionals, who are now left to ponder their next move in their ongoing battle against ever-escalating austerity measures.

On May 16, the Council voted 8-1 to transfer India Street’s vital health care services which primarily benefit the poor and uninsured to the “non-profit” Portland Community Health Center (PCHC). Those services include HIV-testing and treatment, a needle-exchange program, and emergency Naxolone injections for heroin overdoses.

In what has now become a routine scenario in City Council meetings, the majority of attendees spoke out against the proposal — part of city manager, John Jennings’ proposed $236 million city budget — while a smattering of business executives, bourgeois elites, and residents who resent paying property taxes supported closing the clinic. Yet, after over an hour of public comment during which citizens — many of them patients — gave emotionally arresting testimony to the life-saving benefits of the clinic, the council sided with the minority (their true constituents) and passed the budget, anyway.

Turns out Marx and Engels were correct in their assessment of the state as little more than a “committee for managing the common affairs of the whole bourgeoisie.” Local and municipal governments are no different in this regard. As such, these completely irrelevant public comment sessions are offered as a pretense to some semblance of democratic process. The truth is, City Hall does not give a gosh-darn what taxpaying voters think.

As if to add insult to injury, councilors had the nerve to chide members of the public for their “angry tone.” Councilor David Brenerman brushed off (seemingly accurate) accusations of the council prioritizing luxury golf courses and tax-breaks for businesses over people’s lives as “personal attacks.” (Jennings’ budget provides $1,271,838 for a combination restaurant-golf course.)

Councilor Jill Duson ratcheted up the condescension by remarking the council had reached an agreement, “we can all live with, pun intended.” (Perhaps Duson, like Gov. Paul LePage, is vying for a seat in Donald Trump’s administration…?)

One would think Duson, as an African-American woman, would be more sensitive to the plight of members of a traditionally marginalized, oppressed group. Indeed, her callous, highly unprofessional comment is a prime example of the limits of identity politics, which has become the raison d’etre of the liberal-left. As celebrities and power-elites like Oprah Winfrey, Anne-Marie Slaughter, Barney Frank, Supreme Court Justice Clarence Thomas, and Caitlyn Jenner illustrate, one can be black, gay, female or transgender and still be a proud capitalist member of the one percent.

But I digress… Back to the ravages of austerity.

Portland’s lawmakers and elected officials (as well as unelected ones, like the city manager) are using the same savage, cost-cutting measures imposed on citizens in Greece, Spain, and other parts of the U.S. to justify draconian reductions in public services. These austerity measures slash funding for schools, infrastructure, vital health care programs, and other public necessities, while granting massive tax-cuts, incentives, and other handouts to the wealthy and businesses. Under the guise of austerity, the power elite claim “We’re broke! We need to cut-back!”, yet somehow still have hundreds of thousands of dollars for luxury condos, high-end apartment complexes and golf courses, tax-cuts for the wealthy, and a personal assistant for Mayor Ethan Strimling who receives nearly as much money as he does.

Call it “austerity,” or “neoliberalism,” but we are really just witnessing plain old capitalism at work. It is also an insidious form of class-warfare. And in the oft-referenced observation of millionaire investor, Warren Buffett, “My class is winning.”

This is, of course, hardly the first time the City Council has attempted to ram through controversial, if not downright unpopular, initiatives. From efforts to ban panhandlers from busy median strips, to selling off most of Congress Square Park to a corporate hotelier, to deliberately leaving restaurant servers out of an insultingly modest raise in the city’s minimum wage, the council has, in recent years, frequently found itself on the wrong side of public opinion. The fact that City Hall ultimately lost either in court or at the ballot box in two of these three scenarios is, indeed, quite telling.

There is no question that all of these city councilors need to be booted out of office–especially those like Nick Mavodones, Ed Suslovic, and Duson who have been in power for years. (This is a good reason why we need term limits for municipal offices.)

But a truly radical re-structuring of society, even at the local level, will take more than merely electing “better” representatives to serve the interests of the state. We need to smash the state and build one run by the workers themselves.

Indeed, the fact that Portland residents do not have any say in the crafting of the city budget (and, per the city charter, are expressly prohibited from pursuing ballot referendums on anything pertaining to the budget) is a striking indication of just how limited and illusory American “democracy” truly is.

Jennings has made his own commitment to an austerity agenda abundantly clear. Part of Jennings’ aim in his city budget is to get the city of Portland out of the health care business so lawmakers can focus on the really important stuff: Fixing potholes and paving roads.

In an April 1 op-ed to the Portland Press Herald/Maine Sunday Telegram, Jennings writes:

“We simply do not have the financial or staffing resources to do everything for every group or individual. … We are setting new priorities for getting back to the basics of municipal government. For instance, we are focusing on infrastructure improvements such as getting our roads and sidewalks in the condition that a city of Portland’s prominence deserves.”

Throughout the op-ed, Jennings — who is a co-owner of the Portland Red Claws basketball team and previously worked in Bill Clinton’s administration — employs the technocratic vocabulary of corporate capitalism, using phrases like “make government operate more cost-effectively,” “reduce costs,” “get things done,” and “streamlining resources.”

So, in the face of India Street’s closure, where do Portland activists go from here?

Obviously we need to stay alert for further slashing of public services in the name of “cutting costs.” Certainly we should be encouraged with the swiftness and rapidity with which concerned citizens mobilized to save the clinic.

Unfortunately, that nascent movement already appears in danger of being undermined by various “ultra-left” personalities within the Portland community who, sadly, seem more interested in lecturing fellow leftists on their lack of activist “purity,” than working alongside them to take back our city. These individuals are toxic to any organized movement, and their true commitment to working-class revolution is dubious at best.

We may have lost this round, but the “Battle for Portland,” wages on.