On April 22nd at about 3 p.m. police officers, fire fighters, and paramedics responded to 563 Cumberland Avenue in Parkside for a man that had fallen from a rear porch. Fifty-three-year-old Donald Stain of Portland was pronounced dead at the scene. 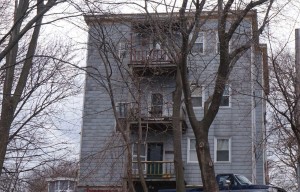 The rear porch at 563 Cumberland Avenue.

Mr. Stain was a resident of the building. Initial investigation indicates he was alone on the second floor porch when a railing gave way. Mr. Stain fell about 19-feet, landing on an asphalt surface.

Portland Police and the Medical Examiner’s Office are investigating the death, it does not appear suspicious at this time.

Building inspectors from the City of Portland responded immediately and ordered all access to the porches be closed pending further inspection.

City inspection records from the Fire Department & Code Enforcement Office do not indicate any prior or active complaints regarding the condition of the porch.

City Code & Fire inspectors went to the Cumberland Avenue property on the morning of April 23rd, to fully inspect the building. That report will be forthcoming. Officials are scheduling inspections of the landlord’s two other Portland properties.

“We are deeply saddened by the death of yet another Portland resident from unsafe housing conditions. When is the City going to take action and start protecting residents from unfit and unsafe housing? Landlords must be held accountable,” said Crystal Cron, co-chair of the PTU.

After a tragic fire on Noyes Street in November that left six dead, a Fire Safety Task Force formed and made recommendations in February to expand housing inspections and code enforcement, including designating a city official to oversee housing safety.

In the City Manager’s budget recommendation to the City Council on April 6th, the recommendations from the Fire Safety Task Force were put forth for the 2016 fiscal year.

Now that spring is here, take stock of the conditions of porches and roofdecks, report any possible violations, and request an inspection via Fix It! Portland.