Posts
Home Featured Commentary The Rent is Always Due

The Rent is Always Due 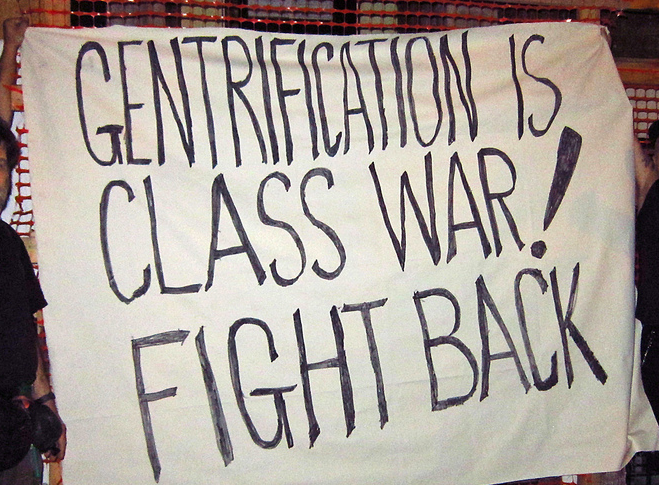 “It takes a scary kind of illness/To design a place like this for pay,” Jello Biafra proclaims on the Dead Kennedy’s “This Could Be Anywhere,” a song that details the tragic downfall of a suburban American town that falls victim to gentrification. “The downtown, an endless generic mall/Of video games and fast-food chains.”

The punk song could be a chilling soundtrack for Portland. The city is being rapidly transformed before our very eyes–and not necessarily for the better.

City officials seem hell bent on privatizing, commercializing, and “revitalizing” every square inch of Portland. The city currently has three major development projects in the works– all of which have been stalled due to local opposition.

These projects come on the heels of the drawn out battle to preserve Congress Square Park, which the City Council attempted to sell to an out-of-state corporate hotelier to create a ritzy events center. That effort–backed primarily by local Democrats and bourgeois business owners–was thwarted in a narrow referendum last summer. A year later, the long neglected park is enjoying something of a revival with a summer-long schedule of free movies, concerts, dancing, and other family friendly events.

But rather than learning from its colossal failure with Congress Square Park, the City Council is moving full-speed ahead with further efforts to make clear to tourists everywhere that Portland, Maine is “Open for Business.”

Rents, meanwhile, have gone through the roof. With a near zero vacancy rate and high demand, landlords and housing companies are free to charge increasingly exorbitant rates for apartments often no bigger than a college dormitory. In fact, according to a recent story in the Portland Press Herald/Maine Sunday Telegram, Portland ranks second in the nation in rising rental costs based on data from Zillow, an online real estate firm. According to the firm, the median rent in Portland rose 17.4 percent to $1,582, compared to the national average of 4.3 percent.

Of course, landlords claim they have absolutely no control over rent costs, blaming them on the magic of The Market. But this empty excuse merely serves to obscure the landlord’s true aim–one that is no different from that of any other capitalist: To maximize profits. Landlords are not in the business of providing affordable, reasonably priced homes for residents. They are in the business of making money. Blaming the nebulous, artificial concept of The Market is simply an easy way for them to avoid admitting as much.

And do not get me started on the cruel joke that is “affordable housing,” which is often anything but.

I do not doubt most landlords are decent, well-meaning people. But in an ideal world–one oriented around human need rather than the dictates of capitalism–we would not need them. Instead, tenants could collectively own their homes in a cooperative fashion.

All this economic growth is pushing working class and low-income residents out of Portland. Taking their place are upper-class transplants “from away,” who consider $1,600 a month for an apartment “cheap.” Compared to what they paid back in Massachusetts or New York, it probably is.

And let’s be clear about which faction of the business party is primarily driving this neoliberal growth: The Democrats.

Given that registered Republicans are something of a rare breed in Portland, this assertion may not seem like much of a revelation. But it is important left-leaning voters reject the stubbornly enduring fiction that the Democrats are the populist “people’s party” they pretend to be.

Democrats (and, I would argue, liberals in general) are just as committed to capitalist pro-growth policies as the Republicans. They too suffer from what Australian environmental professor and author, Clive Hamilton, calls “growth fetishism.”

According to Hamilton, this fervent worship of the “free-market” and all things economic has become our new religion.

“Cargo cults and growth fetish both invest magical powers in the properties of material goods,” he writes in his 2003 book Growth Fetish, “possession of which is believed to provide for a paradise on earth… each has prophets whose role is to persuade ordinary people to keep the faith, to believe that more cargo or more money will arrive and will take believers to a plane of ecstasy.”

The logic of capitalism insists that anything that cannot be reduced to a commodity to be sold to the highest bidder is devoid of value. Thus, proponents of the Congress Square Park sale frequently denounced the public area as a “failed space”–failed because it is not contributing to their personal finances.

As for the bedraggled looking homeless vagrants who frequented the park… well, pushing them out of the publicly visible area and out of the sight of tourists would simply be an added bonus, they figured. And it is always the poor and working-class who inevitably suffer the most under such neoliberal policies.

But growth is “good for business,” Portland Press Herald editor and columnist, Greg Kesich, assures us. The liberal Kesich, who often comes off as a local version of Thomas L. Friedman, has been hammering on the pro-growth theme lately. Portland, Kesich writes in a March 25, 2015 column (“Residents of Portland have to get past their aversion to growth,”) is a “good place to put people and businesses. Although there are quite a few of both now, we could use more.”

Well, the last point is certainly debatable–on both counts.

Hey, here’s an idea for Kesich and the rest of the city’s growth-fetishists:

Let’s forget about business for once. They seem to be doing fine from where I am standing. Instead, let’s focus on actual human needs. Portlanders need affordable housing that is actually affordable for low-middle-income residents. They need rent control and cooperative housing. They need easily accessible public space free of corporate intrusion. And they need jobs that pay a living wage.

Gentrification is more than an academic sociology term. It is a form of class warfare. And it is time for working Portlanders to start fighting back.