The Other City Council Races 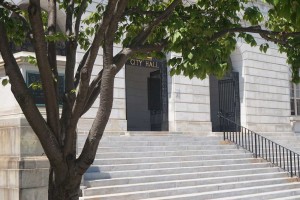 Dave Foster is a Maine native, veteran of the Air Force and works in marketing at the Great Lost Bear restaurant. Dave supports municipal broadband and free public wifi to create economic growth for the city. His other issues include support for a living wage, such as the $15 minimum wage referendum, and support for affordable rent.

Matt Coffey is a homeless resident and publisher of the Hobo News. Matt can been seen regularly in Monument Square handing out issues of the Hobo News for a $1 donation. Matt’s goal is to be an advocate for the marginalized and working class people of Portland.

Nick Mavadones is the Operations Manager at Casco Bay Lines. He has served as mayor four times — back before it was an elected position, he held the ceremonial position of Mayor, having been chosen internally by his fellow City Councilors.

Nick has publicly attacked Mayor Michael Brennan for creating difficult dynamics on the Council, and many wondered if he would run again. Nick announced his reelection bid in time to endorse Ethan Strimling’s candidacy for Mayor.

Sean Kerwin is a residential builder and homeowner on Parris Street in the Bayside neighborhood. He and his wife Laura Cannon are active in the Bayside Neighborhood Association. Sean is running to support market rate housing development. He believes Portland has a generous amount of affordable housing for a city of its size.

Sean wants to be a strong advocate for the Portland Metro bus system, and promises to push for bicycle and pedestrian concerns in the design of all street projects.He also supports better funding for drug awareness education in the schools to help combat the problem of addiction.

Brandon Mazer is a Munjoy Hill homeowner and lawyer at Shipyard Brewing Company. His priorities include maintaining the jobs Portland has, encouraging existing businesses to create new jobs, building more housing, and attracting new companies and investment to Portland.

Brandon Mazer serves on the India Street Neighborhood Advisory Committee, the Board of Directors of Special Olympics Maine, and the Maine Brewers’ Guild’s legislative affairs committee.

Belinda is running to promote responsible development that maintains public open space, waterfront access, historic buildings, wooded areas, and trails. She also supports clear rules and fair processes for developers. She wants to work towards increased accessibility in public infrastructure for those in wheelchairs, with walkers, or pushing strollers.

Also running is Patrick Flynn, who represents Peaks Island as an elected member of the Casco Bay Lines Board of Directors.