The cause of the fatal fire at 20 Noyes Street last November has been determined to be an accident.

According to the Maine State Fire Marshall and Portland Fire Department the fire was the result of an “improperly discarded smoking material.” 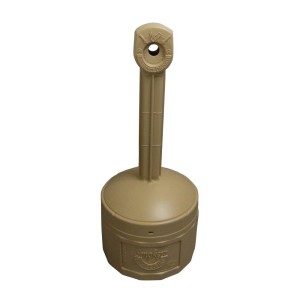 Example of the type of smoking receptacle where the fire began. -Courtesy Photo

Although ruled an accident, the lack of properly working smoke detectors and the improper placement of the outdoor ashtray, led to the fire going undetected until it was too late.

At the time the fire was discovered, the main entrance door to the residence and the porch were engulfed in flames rendering that exit impassable.

The State Fire Marshal’s Office worked in conjunction with the Portland Fire Department and Portland Police Department on the investigation. Scientific testing and fire modeling conducted by the Federal Bureau of Alcohol, Tobacco, Firearms and Explosives (ATF) supports the conclusion of the investigators.

Given the severity of this incident, the City has also been working to gain access to inspect the other rental properties owned by Gregory Nisbet, the landlord of the 20 Noyes Street property.

After conversations with the landlord proved unsuccessful, the City was able to obtain an inspection warrant on January 20th in order to inspect 186-188 Dartmouth Street and 124 Noyes Street. Those inspections occurred on January 20th and the City is currently evaluating the violations and necessary enforcement actions.

Tenants of 186-188 Dartmouth Street have been evicted by Nisbet.

The City has established a dedicated phone and email for anyone who has fire safety questions or concerns that they’d like to talk about. Call fire prevention officials at 207.482.LIFE or email life@portlandmaine.gov.