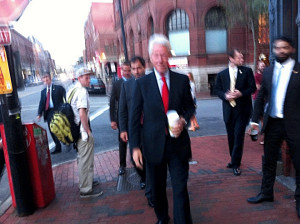 My dog Ruby and I were walking toward the Old Port when I noticed a commotion up ahead at the corner of Middle and Exchange. I figured out pretty quickly that it was Bill Clinton who was in town. That familiar shock of white hair stood out, even from fifty yards away.

I had plenty of time to get my cell phone camera ready as the President marched straight toward me, Starbucks cup in hand. I snapped a picture. A little blurry, but good enough. I shook the President’s hand and welcomed him to Portland. He was smaller than I thought. His handshake was firm, but gentle, unlike gubernatorial candidate Eliot Cutler, who almost broke my hand with his crushing grip at an event in Deering Oaks Park a few weeks ago.

I followed the President and his entourage across Middle Street, trying to get a better picture. The Secret Service men were getting a little nervous. Other people all around were taking pictures, and shaking hands, and even posing for pictures with the President.

As the President was climbing into his SUV, he looked down at Ruby and said to me “I like your dog!” Ruby is very cute. People stop us on the street all the time to say hello and pet her. But she’s a little shy.

“Her name is Ruby,” I said to the President.

“Hello, Ruby!” the President called out, trying to draw her in. But Ruby wasn’t that interested.

“I have three dogs,”said the President in his Arkansas drawl. “She probably smells them on me.”       Some people laughed. It might have been the Secret Service agents. Then the President jumped in the back of the car, and was off to his next stop.

Ruby and I walked home, had dinner, and now she’s taking a nap.