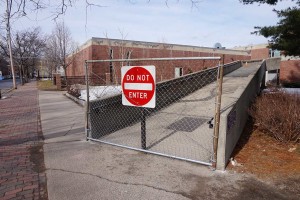 The Reiche ramp Clark St entrance is closed due to crumbling concrete.

The ramp that connects Clark Street to the Reiche elementary school entrance is slated to be removed and a new entrance put in its place.

“Over spring break, that ramp will be removed and the entrance will be brought up to grade,” said Spencer Thibodeau, City Councilor for District 2.

Spencer has been working with the school to assess changes that are necessary. In addition to the ramp being removed, the entrance to the school will provide three separate paths to the community center, the school entrance, and an elevator to the second floor.

In addition to the ramp removal, the Reiche School requires maintenance on the roof of the school.

“The roof is in good condition, for whatever reason it was not underpinned or sealed correctly. These funds will help fix this. Existing leaks that were affecting the school have all been sealed and are no longer an issue,” the Councilor said.

The traffic changes around Reiche reported in West End News’ last issue are separate from this funding and will be covered by a category block grant that is federally funded, according to the Councilor.