The unofficial Portland primary results are in.

The Portland primary results are in. The most hotly contested race was for State Senate District 27 (West End, Parkside, East End, East Deering and Back Bay neighborhoods).

Former Senate President Justin Alfond was term-limited. This left an open seat that in all likelihood will be filled by a Democrat given the district’s demographics and voting history. Most would agree that the winner of the Democratic primary is the de facto winner of the seat. 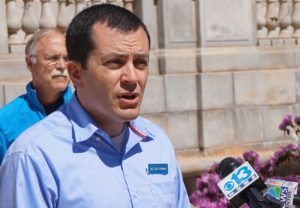 Ben Chipman speaks to save India Street public health clinic in May 2016.

This race made headlines more than once. Diane Russell raised over $89,700 (the most ever for the district) and went on the attack with a plethora of negative mail pieces and robocalls.

In the general election this November Ben Chipman will face Republican Mark Lockman and Green Independent Seth Baker, who were unopposed in their respective primaries.

Mark Dion will face Republican Karen Usher of Westbrook in the general election.