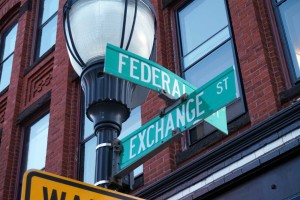 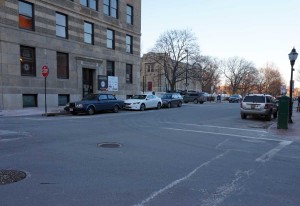 Stretch of Federal St that Press Hotel would like to close for a “pop-up” park.

A “pop-up” park is a temporary park that pops-up seasonally on a closed urban street.

Jim Brady, a local businessman involved with the Press Hotel, brought the idea forward after visiting the McCord Museum Urban Forest in Montreal. The Urban Forest pops-up every year from May to September.

The Press Hotel’s version of a pop-up park would occur on Federal Street between Exchange and Market Streets, a small stretch of low traffic street in the heart of the Government District.

The pop-up park would require the segment of street to be closed for the entire summer.

“We couldn’t find any precedent for this,” said Troy Moon, the City’s Open Space Manager.

As such, the pop-up park proposal was first brought before the Transportation, Sustainability and Energy (TSE) Committee for feedback before going before City Council for approval.

“It is a well chosen street segment. It disturbs nothing,” noted Councilor Kevin Donoghue, who represents the District where the pop-up park would be located.

“Most street-scape ideas from Montreal are good ones,” continued Donoghue.

There are still details to be worked out, such as who is responsible for garbage removal, if the park can be policed with existing resources, and what costs the City would have to bear.

Regardless of unanswered questions, the TSE Committee was excited by the idea.

So be on the look out for a pop-up park downtown possibly as soon as this summer.