Portland Police arrested 59-year-old Francis J. Ready of Portland in connection with a bank robbery on October 12th. Ready is accused of robbing the Bangor Savings Bank at 883 Forest Avenue at 11:50 a.m.

Francis Ready entered the bank brandishing a handgun and demanding cash from tellers. The tellers gave him an undisclosed amount of money, and he fled, on foot, from the bank.

He didn’t get far. Patrol officers responding to the call caught up with him a short distance away from Bangor Savings, and he was taken into custody.

There were no customers in the bank at the time. No one was injured in the robbery.

The F.B.I. is also investigating, and Ready is expected to be charged with the federal crime of Bank Robbery.

Police Release Photos of Get Away Car 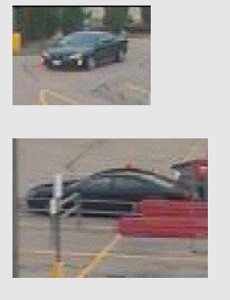 Detectives investigating the October 3rd robbery of TD Bank at 1410 Congress Street have located video of the car the robber used to flee immediately following the crime.

The vehicle is a dark colored sedan, possibly a Pontiac. It was parked in front of Shaws Supermarket in the same shopping plaza as the bank is located. The perpetrator got in the passenger side and was driven away by a second person.

On October 10th at approximately 7:30 p.m. the Portland Police responded to the area of 238 Auburn Street for a serious motor vehicle accident involving a sport utility vehicle, and two pedestrians.

The pedestrians, a 34-year-old female, and a child of only 3, both from Portland, sustained serious injuries. They were struck as they crossed the roadway in the path of the northbound vehicle. Speed does not appear to be a factor.

The seriously injured woman and child were transported from the scene to Maine Medical Center for treatment. The 55-year-old male operator of the vehicle was not injured.