by Tony Zeli, with Rosanne Graef

Dr. Philip Thompson has spent a lifetime and then some in the West End. He celebrated his 100th birthday in May. Rosanne Graef and I catch up with him at his current home, 75 State Street. Rosanne asks the questions, as I take notes and occasionally interrupt.

Streetcars and Skiing in Stroudwater 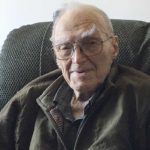 Philip Thompson, MD at home in the West End.

Phil Thompson’s childhood home was just down the road at 203 State Street. “I haven’t gone very far,” he quips.

As a child, he loved to skate and remembers spending a lot of time shoveling. So, yes, he definitely grew up in Portland, Maine.
He remembers when movies were ten cents and there was only one theater, the Maine Theater on Park Street. All the kids had to see the latest Douglas Fairbanks movie – silent films like “The Thief of Baghdad,” “Robin Hood,” and “The Mark of Zorro.”

He went to Butler Grammar School, now a housing complex on the corner of Pine and West. He graduated from Portland High School, now recognized as one of the oldest public schools in the nation. Portland High was already over a hundred years old when Phil Thompson attended in the thirties.

He remembers the streetcars coming as the first big change for the city in his lifetime. From the West End, anyone could hop on the streetcar and for five cents go to Cape Elizabeth, Stroudwater, Riverton Park…

“They had music and dancing, and generally a good time,” he recalls fondly of Riverton Park. “People would get in a trolley and get out there and back. And it’d be relatively inexpensive.”

Phil Thompson’s father was a doctor and his grandfather, too. In fact, his grandfather was an organizer of Maine General Hospital, a 40-bed facility that opened its doors in 1874. We know it now as Maine Medical Center.

“And so it was just sort of automatic that I … went into medicine,” Phil recalls, “It was something that I just sort of inherited.”

He attended Dartmouth as an undergrad and began medical training there. But the program was only for a couple of years, so he finished at University of Pennsylvania Medical School.

He returned to Maine to practice as a rheumatologist at Maine Med, and had a home office in his basement on West Street.

Things were different back then. Phil remembers that more than half of his patient visits were house calls.

“Things always happened a little differently at home than they did at the office,” he says.

He is casual in his conversation about the people he helped as a doctor. All those house visits for so many years. The good he did as a neighborhood doctor. He speaks of it as a responsibility. Of course, he go to their homes if need be. It was a necessity.

Dr. Phil Thompson explains that many people did not have the ability to come to the hospital or the office. They did not have transportation or the money to take a taxi – an especially expensive means of transit for anyone who had to make many trips to the doctor.

Rosanne prods him a little, “What do you want people to say about you?”

“He was a very friendly doctor,” Phil says, and after a pause, “Who gave me good advice.” 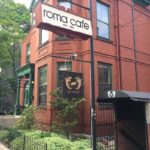 “Marrying my wife was probably my best decision,” he says of Mary Rines. They met at the Roma Café which opened in the 1930s in the Rines Mansion, Mary’s childhood home. The Roma was a hot spot for doctors in the neighborhood.

“We had a West End Neighborhood Association where most of the friendship was developed,” Phil recalls of their social life together. “And then of course the round of doctors. There were a lot of doctors around the neighborhood.”

Phil and Mary led active lives in the community. Mary Rines Thompson was a business leader and philanthropist who served the community in many ways until her passing in 1992. She headed the Maine Broadcasting System in the seventies. She served on many boards and gave much to the community.

Of all the community organizations Phil Thompson has been involved, he says Portland Trails has been the most important.

Rosanne inquires, “Was your main interest in that because of health reasons… or environmental?”

“No, it’s just the best thing to do… People need to get around and exercise.”

He talks with excitement about the East Coast Greenway that runs from Calais to Key West, Florida.
“The final joint is being put together this summer,” he says of the Close the Gap campaign. The Eastern Trail Alliance is building a 1.6 mile stretch of trail that includes a couple of bridges in Scarborough. This is the last gap in a 65-mile trail that runs from South Portland to Kittery and is part of the East Coast Greenway.

In fact, Dr. Phil Thompson’s children recently donated $25,000 to the campaign in his honor.

He stays active on other issues, too. And he likes to write letters to the editor. His big issue today, “Dying with dignity and without pain, particularly for those who have Alzheimer’s.”

The big piece of advice he wishes to share with readers is that they “ought to make up their mind when they are twenty years old if they want to die with dignity.”

He says it is gut-wrenching agony to care for a person with Alzheimer’s. It can be ten years of suffering before death. Especially people with Alzheimer’s should be able to choose to die without pain. And they should have the permit to do so, with no repercussions for the doctors, who are doing their duty, according to Dr. Thompson. 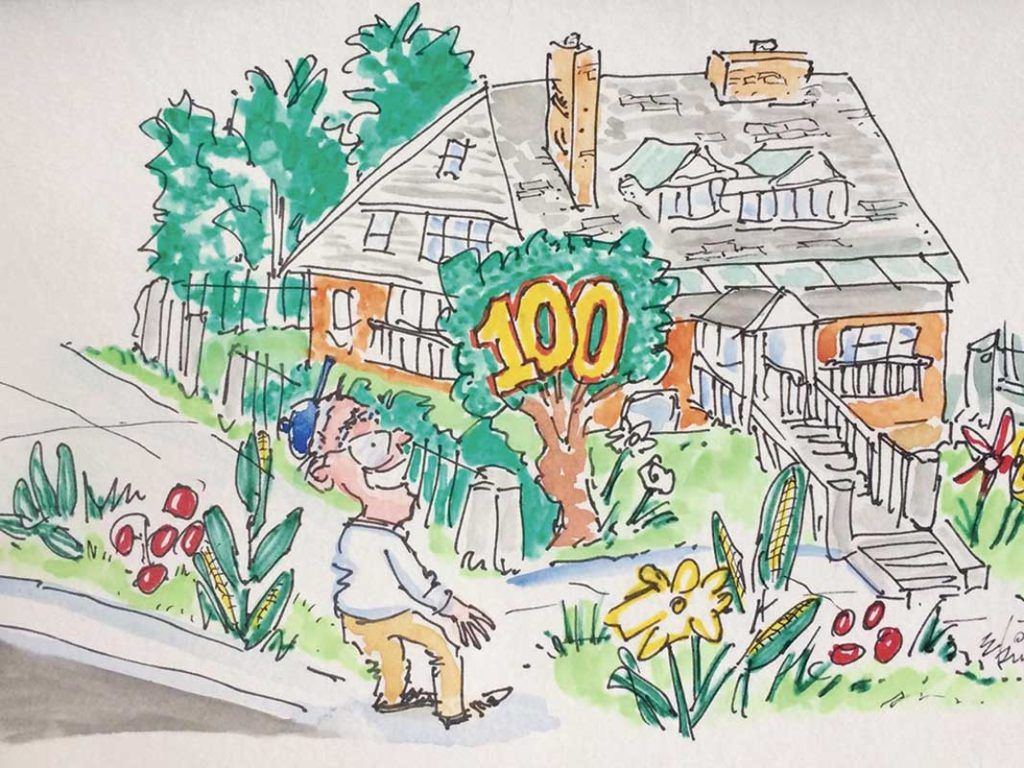 Papas House, by Ed King, former publisher of West End News. Given to Dr. Philip Thompson on the occasion of his 100th birthday.

How did he celebrate?

“I didn’t do anything. I just enjoyed the party.”

Before Rosanne and I leave, we do squeeze one last tidbit from him.

Of the West End, Phil says, “[It’s] one of the best communities in the world. It has the potential to be better.”

If you know a West Ender that you want the world to know about, let us know at info@thewestendnews.com.

Tony is publisher and editor of the West End News. Reach him at tony@thewestendnews.com.