A fire severely damaged the back of an apartment building and claimed the life of a pet dog on Saturday, November 2nd. 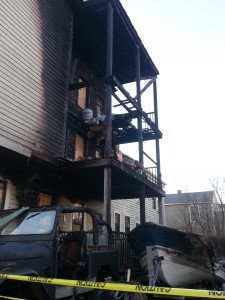 The building, which is located at 165 Brackett Street has its windows boarded up and a lock on the front door with a sign reading: “POSTED – No Trespassing”. The back of the building is cordoned off with yellow tape reading: “Fire Line Do Not Cross”.

City officials were not available to comment on the nature of the blaze as the cause of the fire is still being investigated.

Keith Gautreau, Assistant Chief of the Fire Prevention/Community Outreach division of the Portland Fire Department commented, “The fire still remains under investigation, [we are] waiting on some more information from the insurance investigators.”

Mr. Gautreau advised that a press release would be forthcoming as soon as more information is discovered.

The fire claimed only the life of a pet dog. No human injuries were reported from either fire fighting personnel or tenants of the building.

The adjacent unit to 165 Brackett Street incurred only minor damages and was re-occupied after the fire was extinguished, according to the press release provided by the Portland Fire Department. 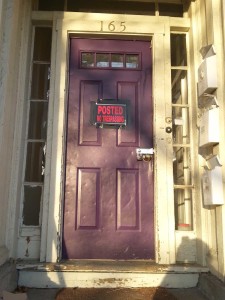 Observing the building at street level from the parking lot that abuts the driveway of 165 Brackett, one can see severe property damage to a boat, a Jeep and potentially a few motorcycles. Excessive amounts of clothing and insulation drapes over charred timbers at the second and third story of the building.

From personal observation, much of the blackened wood appears the most intensely burned in the middle of the third floor on the back of the building. Shattered glass is littered around the building and all windows on the right side of the building are securely boarded shut with plywood.