Posts
Home Cause Blog Notes From a S!#@hole Country

Notes From a S!#@hole Country 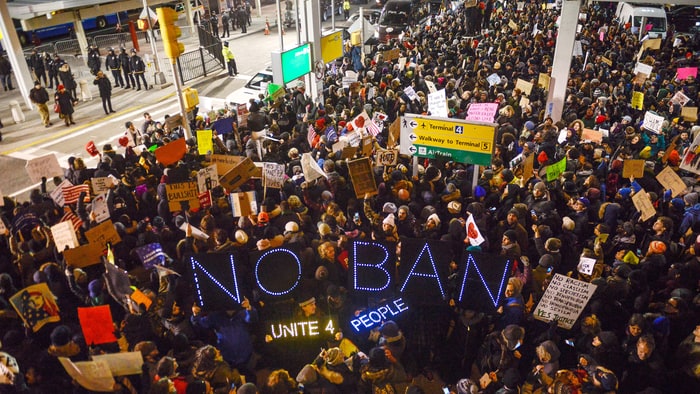 One year into Donald Trump’s nightmarish presidency the United States government has shut down. It is, indeed, an ironic — and highly fitting —symbol to mark the one year anniversary of Trump’s inauguration.

Trump, rather than “draining the swamp,” as he childishly promised on the campaign trail, has merely flooded it with even more raw sewage and swamp monsters. For all his disparaging remarks about “shithole countries” (by which he referred to El Salvador, Haiti, and the “country” of Africa), the U.S. is rapidly devolving into such a shithole. Or perhaps it always was one. Take your pick.

At the heart of this latest government shutdown is the fate of Barack Obama’s Deferred Action for Childhood Arrivals (DACA) program, which offers a “path to citizenship” for young adult immigrants who were brought to the U.S. as children.

I put the phrase, “path to citizenship” in quotes because there is no such thing as an “illegal” human being. Additionally, the entire concept of “legal citizenship” is a relatively recent concept. Up until the 19th century, immigration laws were virtually nonexistent. Though many assume their ancestors came to the country “legally” or utilized the “proper channels,” according to the American Immigration Council, “unauthorized immigration has been a reality for generations.”

DACA currently shields some 800,000 immigrants who live and work in the country from deportation. For many of these young immigrants, America is the only home they have ever known. Trump’s elimination of the program would tear families apart and inflict unnecessary suffering upon thousands of working-class people.

“It’s not just affecting one person in the family,” said Patricia Jaramillo, a 23-year-old DACA recipient from Van Nuys, California of Trump’s efforts to phase out the program. “It’s a ripple effect that affects entire communities, entire families…”

Furthermore, local manufacturing businesses like Cozy Harbor Seafood and Barber Foods rely heavily on these immigrants’ labor power — which is cheaper and easier to exploit than that of “native” U.S. citizens. These processing plant jobs — which take place in cold, pungent conditions — are mundane, repulsive, and often involve long hours of standing and repetitive motions.

Workers in these degrading jobs are routinely denied bathroom breaks — to the point where many poultry workers have resorted to wearing diapers to work, according to a 2016 report by Oxfam America. While denying adult employees basic necessities like bathroom breaks may seem patently illegal, the fact is worker protection laws in this country are weak and rarely enforced. The near disappearance of unions has only further eroded workplace protections.

And, as if to add insult to injury, workers at these processing plants are often carefully monitored by numerous surveillance cameras while they work. (This is the case at Cozy Harbor Seafood, where I once worked as an office temp.)

Trump railed on immigration and America’s supposedly “weak” boarder control laws to stoke working-class fear and resentment of “the Other.” During his now-infamous campaign announcement speech, the xenophobic Trump singled out immigrants from Mexico. “They are bringing drugs,” Trump said of Mexican immigrants. “They’re bringing crime. They’re rapists.”

Republicans howl that DACA is an illegal program — that we are a “nation of laws,” and we must “respect the rule of law.” Yet where was this reverence for the “rule of law” last summer when Trump pardoned corrupt, racist Arizona Sheriff Joe Arpaio? The right was suspiciously silent about the vaunted “rule of law,” then.

Indeed, capitalists engage in illegal behavior every day and justify it as merely the “cost of doing business.” Perhaps we should deport all of them?

While the Democrats should be applauded (for once) for holding the line on preserving DACA in the latest government shutdown squabble, I fear their stance has more to do with electoral maneuvering than any genuine concern for DACA recipients. It is worth recalling that Barack Obama deported more immigrants than any other president in U.S. history — including Trump.

As of this writing, Democratic Senate Minority Leader Chuck Schumer has already offered Trump funding for his coveted border wall in exchange for maintaining DACA.

(Just to review, we have money for border walls to keep “illegal” immigrants out of the country, but our elected elites insist single-payer health care is “too expensive.”)

This is further evidence that the left cannot rely on the capitalist Democratic Party to save us. Only mass mobilizations — similar to the Muslim ban protests that shut down major airports last year — can protect immigrant families.

But our efforts cannot stop at merely preserving DACA — though that is an important immediate goal. The left must also put forward a real socialist alternative to the failed immigration policies of both capitalist parties.

Socialists ultimately believe in a world without walls and borders. We believe in a world where people are free to live and roam as they please — or, perhaps more accurately for a warming planet increasingly characterized by droughts, floods, famine, and forest fires, wherever is most habitable. Indeed, climate change is already playing a role in mass migration throughout the globe.

Likewise, many of the Sudanese, Syrian, and Iraqi refugees fleeing to America are victims of our imperialist wars and occupations. To bomb these people’s nations and destabilize them through military force, and then cruelly deny them entry to our shores as they attempt to flee the violence we have inflicted is a particularly sinister form of hypocrisy.

The point is that few immigrants truly have a “choice” in migrating to the U.S. or to any other country. And the ruling class’ concept of a “path to citizenship” for immigrants is, as Socialist Worker’s Danny Katch explains, equally misleading.

The “path to citizenship” is more like a road to nowhere, a long march that forces undocumented immigrants to go “to the back of the line” of a system in which many have to wait up to 24 years to get green cards. Along the way are many roadblocks, from fines that may be unaffordable, to proving they have been steadily employed — in a country where layoffs and temporary work are becoming the norm for all workers …

The fight to preserve DACA and protect immigrant families is a crucial one. And it is a fight that has the potential to mobilize a new generation of radicals to struggle for a world without walls and borders — a world where no human being is illegal.