Maine to DC: Nancy Goes to the Women’s March

From Maine to DC

Nancy charters a bus to the Women’s March 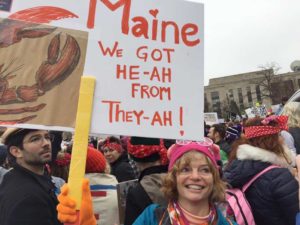 Nancy Dorrans at the Women’s March in DC, January 21st.

While in Iceland last November, days after the election I heard the low rumbling across the ocean of a few women organizing a Women’s March in DC the day after the inauguration.  Through social media I learned that two of my friends had already purchased their airline tickets, and others were trying to figure out how to get there. That evening as I drifted off to sleep, the idea that I could help get people there from Portland struck like lightening and I sent a quick email through my iPhone (before it got doused by an Icelandic waterfall) to my contact at a local charter coach company to reserve a coach for that weekend.

I got an immediate response, “Can you CALL ME ASAP about this? We have so many requests. I would take you first… But need to chat with you. We have had a dozen requests just today so we are pretty limited.”

I had a feeling this was going to be historic!

So began the journey of organizing and then escorting fifty-four Mainers on a two night tour to DC leaving January 20th and returning the 22nd. Among the strong and energized women, one husband, also strong and energized and two teenage boys… creative, well behaved, quiet and unbiased! The tour sold out a few weeks prior with over twenty people on the waitlist. Not to be left out, most of these folks found other ways to get to DC or marched in Maine.

Our group bonded with an outpouring of generosity even before we boarded the bus on Friday morning. One couple hosted a sign making party, others ordered pins and Maine ribbons. Some knitted pussy hats and bought extras to share. And my co-captain Elisabeth Paine made fleece blaze orange arm bands for all of us. Blaze orange was the color Maine organizers told us to wear to help identify us as Mainers at the March.

Get on the bus…

As we boarded the bus on Friday morning bound for this historic event, the energy and anticipation kept growing and our bonds grew stronger. On Saturday morning we were dropped off at New Carrollton Station in Maryland, the first stop on the DC transit Orange line. We had hoped to avoid the crowds. We were early, but the station was already jammed with people waiting for the train. There were nice people, patient people, excited people, men, women and children with signs, pink hats, face paint and positive energy.  We were in tight quarters but felt very safe and part of something, something monumental!

Our train passed the RFK Stadium stop where buses were parked as far as the eye could see. Our group split into smaller pods and rode the wave out of the subway and into the fresh air of the nation’s Capital. We headed to the stage area and the start of the March. 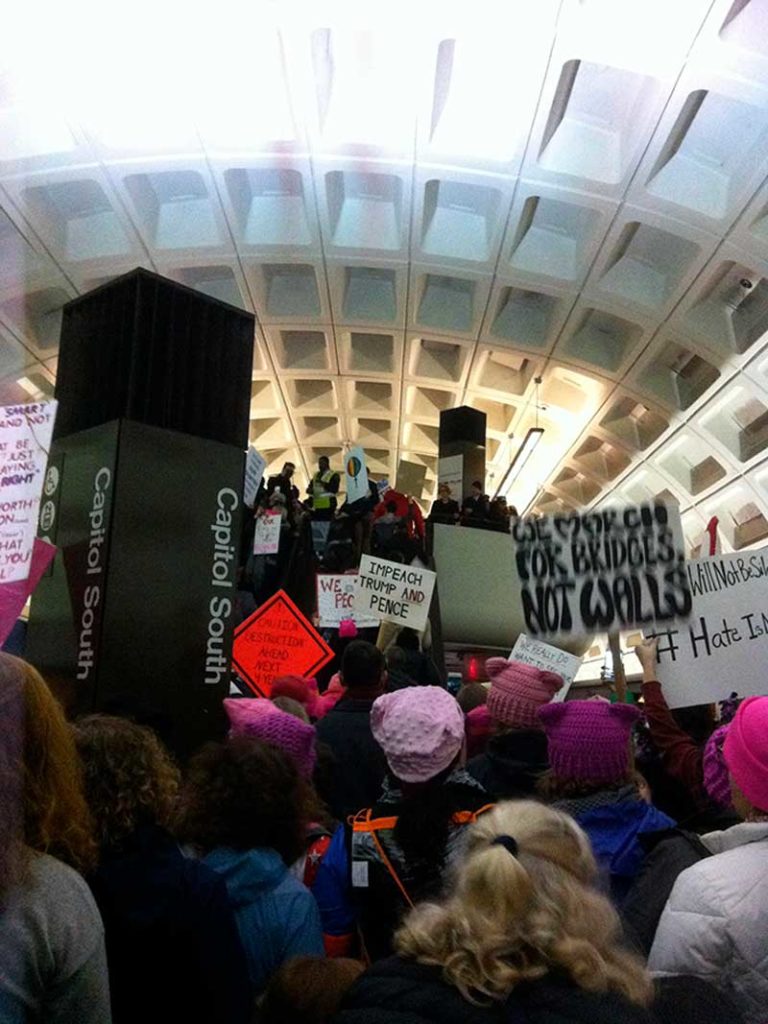 Throngs of protestors, including some from Maine, making their way out of the subway. -Photo by Jean Murachanian

It is hard to describe the experience in the moments and hours after… I felt my mother’s presence all day. I wore her necklace with the sentiment, “War is not healthy for children and other living things.” And I saw a few signs with the same sentiment among the thousands of others. Signs of hope and signs of outrage.

I can tell you that I marched to be heard and to exercise my first amendment right, “The right of the people peaceably to assemble, and to petition the Government for a redress of grievances.” I marched for the rights of women and immigrants, public education, affordable healthcare, and our environment.

What is next? What can you do to rid yourself of this winter’s blues? I recommend you stay active, take action, think positive and exercise your rights!