Musings on the Mayor’s Race 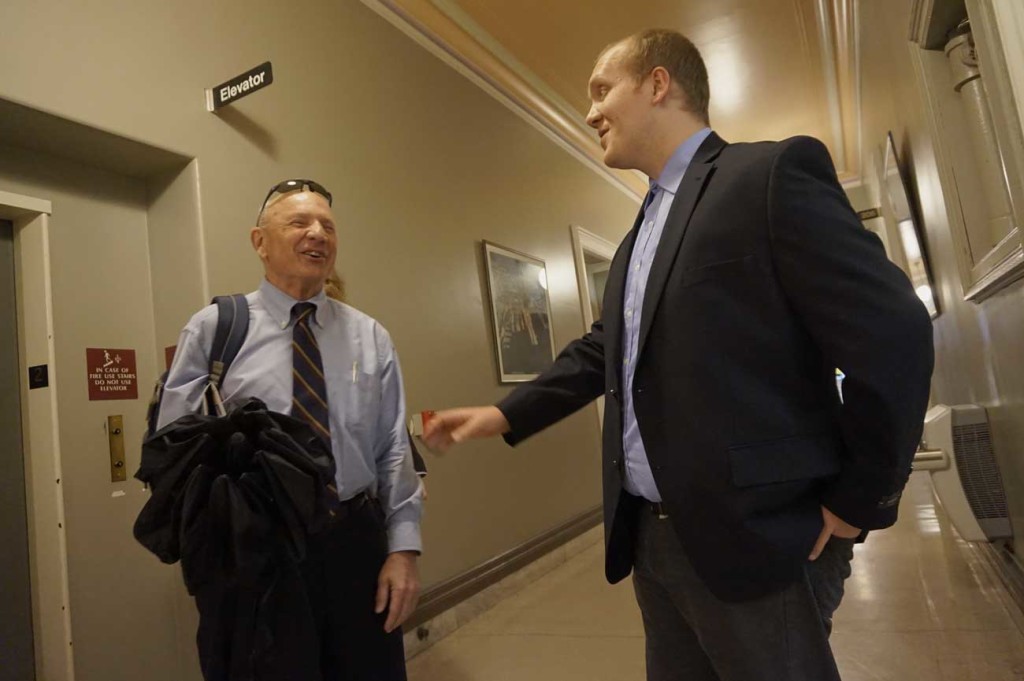 Tom MacMillan, on his way to turn in signatures for the $15 minimum wage referendum, confronts Mayor Brennan on the issue at City Hall this past April.

Four years after Portlanders chose Michael Brennan as the city’s first popularly elected mayor in nearly 100 years, the general consensus from the enlightened Portland punditry is that both Brennan and the newly created mayor position have been a failure.

Regarding the former, politicos cite Mayor Brennan’s apparent lack of “leadership skills,” and his clumsy, frequently disorganized handling of City Council meetings. In fairness to Brennan, none of the current members of the Portland City Council seem to have a firm understanding of Parliamentary procedure. Half the time councilors do not even seem to know what they are voting on.

As for the alleged failure of the latter, pundits point to the unique voting system implemented specifically for the mayor’s race: Ranked-choice, or instant run-off voting. Unlike our traditional “winner-take-all” elections–which were designed to blunt rather than facilitate democracy–a ranked-choice system allows voters greater flexibility to vote for the candidate they like most, instead of hedging their bets on the supposed “lesser evil.”

Yet those who decry ranked-choice voting are the same elites who rail against the “overuse” of the referendum process. (“Overuse,” meaning that it is used at all.) Democracy and the will of the people? No, we simply can’t have any of those things. They are too complicated.

As mayor, Brennan (a Democrat), like most of the members of the City Council, has kowtowed to business and corporate interests at the expense of working class residents. Brennan has pursued, almost single-mindedly, a slew of unpopular development projects, all with the aim of making Portland more “business friendly.” While these projects have been a boom to developers, real estate firms, landlords, restaurant owners, and the business community, they have forced working class and low-income Portlanders out of the city. Indeed, this is the textbook definition of “Gentrification.”

Brennan was a key orchestrator in the controversial attempt to sell off most of Congress Square Park to an out-of-state commercial developer–an effort that was narrowly defeated at the ballot in 2014.

Additionally, he voted along with the rest of the Council for an inane ordinance to outlaw panhandling on busy street corners. Councilors justified the law as necessary for the “safety” of both panhandlers and motorists.

But the law did nothing to address the root causes of panhandling–poverty, homelessness, drug abuse, medical expenses, the city’s lack of a living wage–and it struck many as an arbitrary attempt to push the city’s poor and desperate out of the sight of tourists. The ordinance was ultimately struck down by the Maine Supreme Court as overly broad (it banned all speech on median strips, not just panhandling) and, thus, unconstitutional.

This is the record Brennan should be judged on–not how well he can run a meeting.

Strimling is perhaps best described as the Hillary Clinton of Portland. The man is a vacuous windbag with nothing of substance to offer on any of the issues. Instead, Strimling simply repeats ad nauseam his intention to “listen” to anyone and everyone that bothers to talk to him. He employs the cliched Democratic talking-points of “reaching out” to “both sides” on any given issue, and thus, “uniting” the “divided” city.

In fact, Strimling only recently offered definitive positions on the referendum questions concerning establishing a $15 minimum wage, and the Soul of Portland‘s “scenic view” question: He, like Brennan, opposes both. 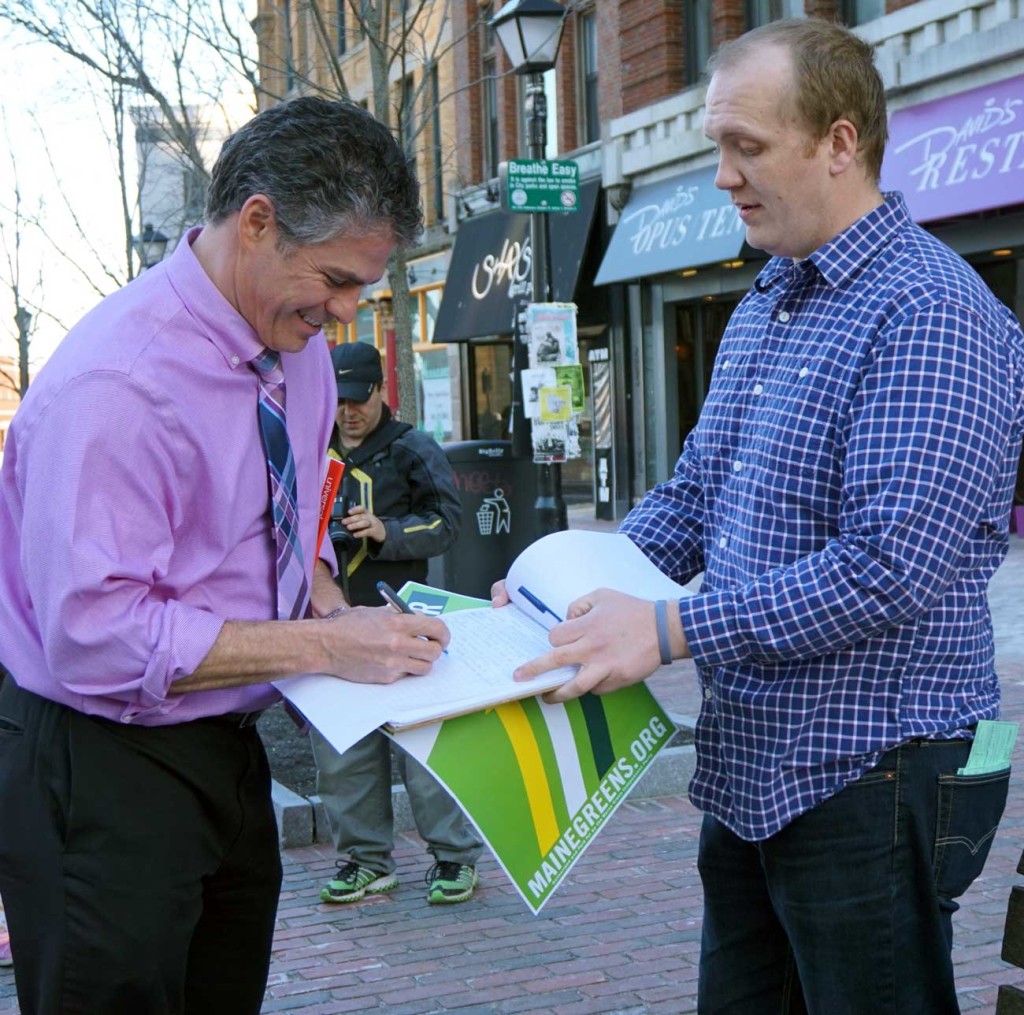 Tom MacMillan is the only candidate of the three offering an unapologetically radical vision for Portland.

As a co-writer and chief organizer for the Greens’ “$15 Now!” campaign, MacMillan supports a living wage for all working class Portlanders. He calls for rent controls, stricter eviction procedures, and a full-time tenant representative at City Hall.

Additionally, MacMillan is the only candidate calling for an end to corporate welfare, in the form of tax-breaks, bailouts, subsidies, and the TIFs (Tax Increment Financing) which City Hall gives out to businesses like candy. He proposes the concept of participatory budgeting which grants citizens democratic control over how their tax dollars are spent.

And while MacMillan’s assertion that the Portland Police Department routinely engages in racial profiling may be considered “controversial” to some, Portland Police Chief Michael Sauschuck has publicly admitted as much.

As leader of the Portland Green Independent Party, MacMillan spearheaded the successful 2013 effort to legalize marijuana in Portland–a law the PPD blatantly refuses to acknowledge or enforce. He is a founding member of the public-space advocacy group, Friends of Congress Square Park, which was instrumental in establishing greater protections for the city’s public spaces. And he and I crafted a City Council resolution opposing so-called “corporate personhood,” and calling for the overturning of the Supreme Court’s Citizens United v. FEC.

Win or lose, MacMillan is injecting bold ideas into a liberal political culture that has internalized the dictate that minimal reforms and lowered expectations are the best we can hope to achieve. And, as MacMillan acknowledges, mayors, city councilors, and other elected officials do not make change. Only citizens agitating, protesting, and organizing can do that.

“Change is not made by the mayor–mostly,” MacMillan said during an October 7 debate at USM. “Change is not made by the City Council… Change is made by people getting active…in their everyday lives…. Whether I’m elected or not, the power rests with the people, not with elected officials. And you need to be active on November fourth, November fifth, November sixth–every day of the week until inequality is uprooted…and until workers have a fair wage and enough to live off of.”