There are now two minimum wage referendum efforts collecting signatures in downtown Portland — but they are not competitors. One is a local effort by the Portland Green Independent Party to raise the minimum wage to $15 per hour. They have been collecting for a couple months now, and their referendum would only be on the Portalnd ballot for a citywide minimum wage this November 2015.

The other volunteer that sidles up to you for your John Hancock is asking for something quite different. They are seeking a statewide minimum wage increase to $12 per hour to be on the 2016 state ballot. This volunteer is with Mainers for Fair Wages, led by Maine Peoples Alliance and the Maine AFL-CIO. They kicked-off their campaign in portland last week at Arabica Coffee on Commercial Street. 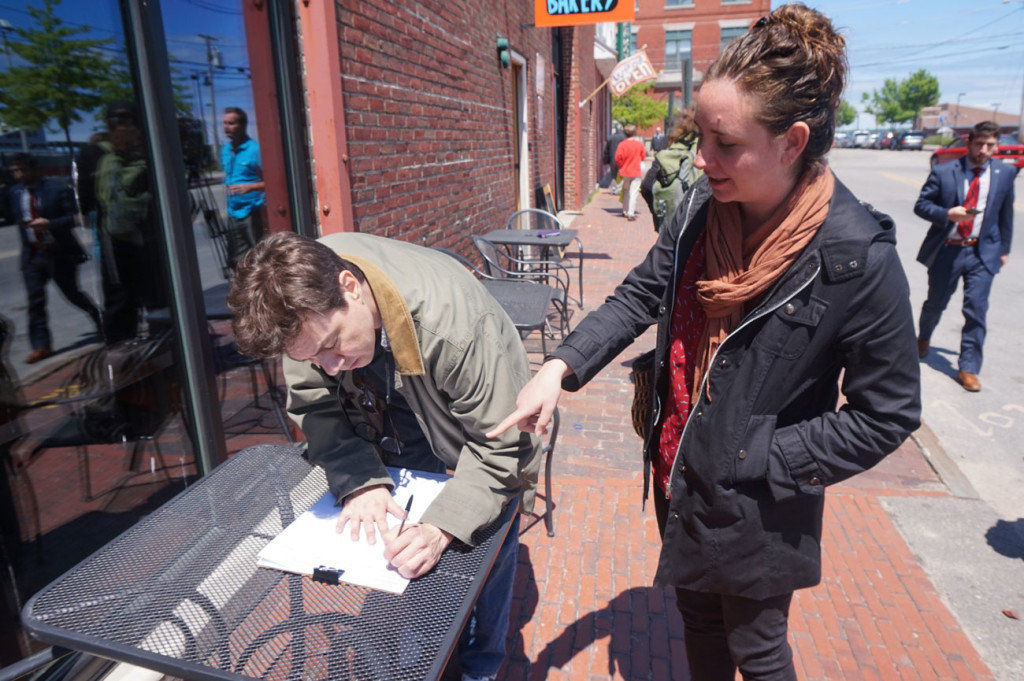 Brian Leonard of South Portland is among the first to sign to put a $12 minimum wage on the state ballot in 2016.

The statewide referendum seeks to raise Maine’s minimum wage to $9 in 2017 and then by $1 a year until it reaches $12 by 2020. After that it would increase at the same rate as the cost of living. The initiative would also incrementally raise the tipped minimum wage until it matches the minimum wage for all other workers by 2024. The tipped minimum wage is currently $3.35, half of the state minimum wage which is $7.50. Tipped workers must earn enough tips to make at least minimum wage or else employers must make up the difference.

Arabica owner Cathy Walsh, who spoke in support of the referendum at the kick-off said, “I opened the doors of my small business to this event because I support this referendum campaign wholeheartedly. It’s the right thing for my community and for my business. The more that working Mainers earn, the more they can spend locally at my coffee shop and elsewhere. Everyone does better together.”

This event is the first in a series of regional grassroots kick off events that are slated to take place across the state in the month of June. In May, the campaign concluded its first month-long fundraising campaign, meeting its goal to raise $30,000 in contributions from over 800 donors.

Because one effort is statewide and the other is for the local city ballot, it is possible for both efforts to make it to the ballot and for both to be successful — or unsuccessful. If both passed, the state minimum wage would increase to $12, and the city minimum wage would be set higher, eventually increasing to $15.