Millennials and the minimum wage 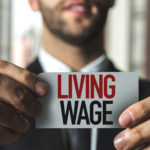 Many struggle in Maine’s economy, but is it particularly difficult for millennials? City Councilor Spencer Thibodeau (West End, Parkside) counts himself among that generation.

“I ran for office because I felt that Portland had a young person problem,” says the Councilor, “But did we ever ask what young people need?”

Well, the West End News asked. Volunteer reporter Luke deNatale and Editor Tony Zeli interviewed millennials living and working in Portland. We included several of these interviews in a January feature, “The Plight of Millennials.” Those interviewed were surprisingly uniform in their concerns. Top issues were housing, gentrification, jobs and wages. Read the feature online at thewestendnews.com/millennials-struggle.

This month Luke and Tony consider the wage issue. Particularly, how will a statewide increase in the minimum wage affect millennials in Portland?

The minimum wage goes up… 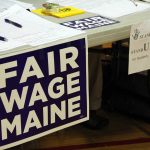 Signatures being gathered for the minimum wage referendum at the polls, November 2015. -Photo by Emilia Scheemaker

Here in Portland, the City Council already had raised the minimum wage to $10.68 in 2017. However, they opted to leave the tipped wage at $3.75. This is the hourly minimum wage that may be paid to workers who earn tips. Still, tipped workers must earn the minimum wage of $10.68 per hour after tips are included.

These local wage decisions were made in the summer of 2015, before millennial Spencer Thibodeau was on the Council. But, the City Council had to take a second jab at the issue, because the statewide referendum did include tipped workers. Councilor Thibodeau was happy to join the majority in increasing the city’s minimum wage for tipped workers, too. This means a raise to $12 per hour by 2024 even for workers who earn tips.

Councilor Thibodeau thinks the wage increase is good policy for millennial workers, but any further work on the issue will wait. He says the Council is in a “wait and see pattern,” while Governor LePage and the Legislature continue to debate the new law.

In our feature, all the millennials we interviewed were decidedly in favor of the minimum wage increase. Are they right to be happy? Or will this wage increase back fire and make it even harder for them to find work? WEN asked the experts at the Maine Center for Economic Policy. We spoke with policy analyst Sarah Austin. She believes that millennials are right to favor the increase.

“Increasing the minimum wage will give an average annual raise of about $3,500 to one in three working Mainers by 2020. That’s huge. This means more families can access health care, afford healthy meals, take a sick day when they need it and afford to save for emergencies like fixing a car. This will also be important to reviving economic growth in rural areas of the state where declining incomes and rising poverty have reduced demand for goods and services,” says Sarah Austin.

Increase in minimum wage good for all…

While our article focuses on a younger generation, Sarah believes the wage increase will benefit all age groups. In fact, a report from the Maine Center for Economic Policy states that wage earners from age 20 all the way to 54 would reap the greatest benefit from the wage increase. Truly, a cross-generational improvement.

Also, Sarah points out that most of the jobs that have been added in Maine since the recession are typically low hourly-wage earning jobs.

“Economic and technological changes in recent years hollowed out middle class industries, and the state lost thousands of middle-wage jobs since 2007. A closer look at federal data shows the jobs added to Maine’s economy predominantly are in low-wage sectors like food preparation and personal care services.”

As such, the plight of the millennials in Portland just might be reduced, at least a little, thanks to voter approval of a higher minimum wage. But, one point millennials make is that a minimum wage is not the same thing as a living wage. Even if wages go up, will there still be an affordability gap, especially in the housing market? Put simply, even at $12 per hour, can a wage earner in Portland afford rent? Check out our March issue on First Friday, March 3rd, for a look at millennials and housing.

Tony is Editor and Publisher of the West End News. Luke has been a volunteer reporter for WEN for the past two years.