Bayside of the Mid-Century Remembered – A Bayside Series

The intersection of Oxford and Elm Streets today is a place one rushes through on the way to somewhere else. Each of its four corners is a parking lot serving a hub of social services nearby. Little remains to suggest that in the half century before 1960 the Bayside area was one of those “miraculous communities” Jane Jacobs spoke of in her book, “The Death and life of American Cities.” Here was a place where neighbors knew each other and kids played together, and where there was little street crime because residents didn’t turn their backs to the world outside their homes. 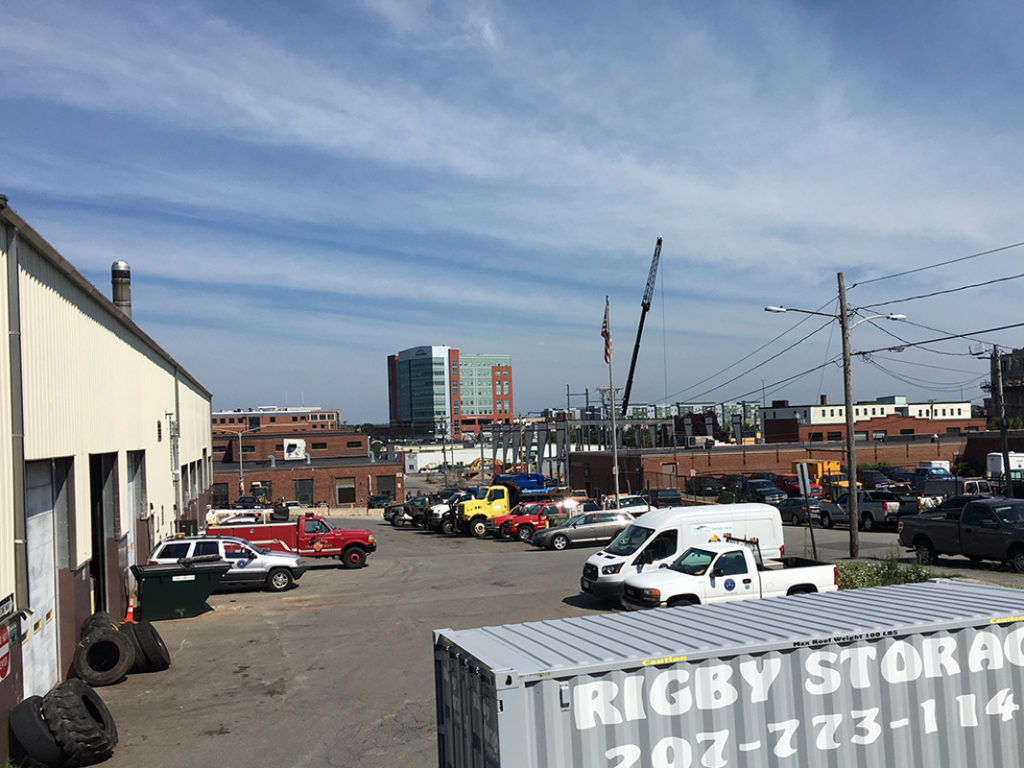 Much of West Bayside neighborhood may change in the coming years. The City is seeking a developer for this public works lot. 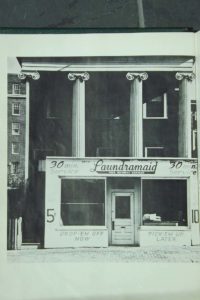 “Pre-urban renewal Bayside was considered poor but respectable,” recalled Phil Conroy, who’d known it as a child. “Many were very old single occupancy houses, closely spaced. On Oxford Street an old lady lived alone in a big old house. Neighborhood kids would run errands and get groceries for her. There were a lot of people like that in Bayside. They were the last of the people who’d lived there forever. I remember an old black lady named Hattie Bryant – a real character – who lived alone in a little house on Laurel Street, where Noyes Moving and Storage is now.”

Conroy’s grandfather Rocco Leo was an Italian immigrant stonemason, and his extended family owned two side-by-side houses at Oxford and Franklin that were condemned for urban renewal.

“He was bitter about it. The city paid minimal compensation and then turned around and sold the land to Noyes when they wanted to get them out of their Old Port property on Center Street and into what was envisioned as the ‘Baby Bayside’ industrial park.”

In the summer of 1971, the Portland Evening Express published an in-depth series profiling Bayside by Murrough O’Brien. Oxford Street was one article’s focuses.  As a way of summing things up, O’Brien wrote:

In the days before shopping centers and the ubiquitous automobile, Bayside served itself and the view down elm-covered Oxford Street – from Franklin to Portland Streets… gives a slice of life at that time… Oxford Street in 1921, encompassing three blocks from Wilmot to Stone, housed 49 families in the 25 buildings there. Today there are only 23 and the frontage of one whole block – between Wilmot and Pearl – is gone, bought up, cleared, and presently owned by the Portland Renewal Authority. Spot clearance has taken another six to eight buildings in the area.

Bayside was the heart of Portland’s Armenian community. In the space of a few blocks there were two variety stores and eight grocers, six of them Armenian. The Mezozian Bakery made Armenian flat bread.

Nancy Thurber, a ’66 Portland High graduate, was born to Armenian refugee parents who fled the WWI genocide. Her maiden name was Krekorian. Her family grew up on the downhill end of Cedar Street with cousins and grandparents nearby.

“We were spoiled,” Nancy said, “We didn’t know it at the time, but I think it was because of what we’d escaped. We had second chances here and started second families. Grandma had my aunt in a field fleeing the Turks. My grandpa came from the same village.”

Nancy’s grandmother ran a grocery store at 88 Cedar Street. She gardened a vacant lot that was next-door. Also, behind the store was an attached two family house. Grandma lived on the first floor and rented the second floor.

“I grew up on Grandma’s homemade yoghurt and fruit rollups made with her homemade compote,” Nancy recalled. “For a treat she’d call Danny Wong’s and order takeout, delivered to the grocery store by Yellow Cab.”

Making homemade fruit rollups was a fragrant process that involved stewing fruits like apricots, resulting in a dense syrup that was rolled onto cheesecloth and dried until ready to be cut and rolled up.

“I get excited talking about the neighborhood because I had such a great time growing up,” Nancy recalled. “By age seven or eight I was allowed to wander. We lived one street away from the grocery store. I took swimming lessons at the Boys’ Club on Cumberland Avenue. Girls were admitted on Saturdays only. Winter we went sliding. Streets were still cobblestoned and cars were rare. So the city would block off the steep parts of Stone or Myrtle Streets. Kids who didn’t have sleds would go to Silver’s or Louis Mack’s junk yards and use the hood of a car to jump in and slide down.”

Car-free living was a way of life, not an option for many ‘50’s Baysiders. Congress Street was where you shopped for basic needs. Shaw’s was on Congress, between Elm and Preble Streets.

Behind the new library, on Elm Street was the Museum of Natural History, housed in an old brick and granite building, demolished in 1972 for parking. Its name was carved in raised block letters on its frieze and its granite steps had smooth slant-topped side-walls, perfect for sliding. Inside was an eclectic collection of curiosities, anything someone thought interesting and wanted to donate. There was a huge stuffed sea turtle and stuffed birds, a birch bark canoe hung from the ceiling, arrowheads and native American pottery, and a case with fluorescent rocks inside that glowed blue at the flip of a light switch. By the late 60’s the museum board was getting rather elderly and they basically dispensed with having exhibits.

Next-door was a Scandinavian Protestant church. Further down Elm Street was a bowling alley with a roller rink upstairs. 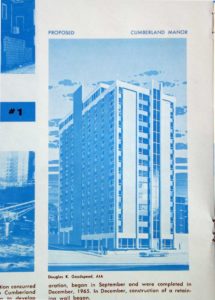 By the mid 60’s strains were showing in the Oxford-Elm neighborhood’s social fabric. Insurance was denied or unaffordable. So much so, that by September 1969 a Portland Press Herald article invited readers to “Join us for a visit to a dying neighborhood.”

“In Bayside,” the article revealed, “House fires occur at a rate of one or two a day, nearly all set. Tenants frequently have to ask a neighbor to watch their homes while they run out for a loaf of bread.”

The Model Cities General Plan of 1971 was supposed to address Bayside’s neighborhood crisis. A Portland Evening Express article on June 21, 1971, revealed widespread disenchantment with the plan among Baysiders. The article noted that many neighborhood folks considered the general plan to be “heavily dominated by the planning department” and characterized citizen involvement as “more rubber stamps than initiators.”

The article concluded, “In previous renewal schemes, citizens have generally had to rely on the advice and recommendations of city planners and had nowhere else to turn for an independent appraisal.”

An anonymous pamphleteer at a Bayside neighborhood planning forum of the time saw the area’s plight this way:

The post-War ethos of the subdivision tract struck its death blow at the Bayside neighborhood in the form of Urban Renewal. The city quickly wrote off Bayside as irreparably blighted and through the process of planning innuendo sealed its fate. No bank would lend money in an area slated for possible clearance… A ‘death-row’ mentality developed and, as one clearance project after another occurred, the area continued to decline…

Indeed, as a newspaper article of the time entitled “Crowbar Hotel” suggests, houses recently vacated and awaiting clearance for redevelopment were colonized by the homeless, helping to further destabilize nearby residential areas.  At the time, it was customary to house the homeless at the city jail.

Next, “Postwar Blues” arrived with the June issue.  The Great Depression and WWII led to deferred maintenance, urban blight, and poor living conditions in Bayside. The Portland Renewal Authority was cofounded in 1950 to address those conditions.  The City seized buildings by eminent domain for “Renewal Project 1” on the south side of Cumberland Avenue between Oak and Casco Streets. The project never happened.  Major accomplishments of the era included Munjoy South and Kennedy Park housing developments, and the building of the Franklin Arterial.

Join Tony for a “walking tour” of Oxford Street. A police cruiser parked all day at the Cedar Street corner points to the impact of the concentration of homeless shelters. And a talk with longtime resident and activist Jay York, who lives near where Oxford Street is dead-ended by the Franklin Street, will explore the history of the first homeless shelter in Bayside. Jay cites benefits to the neighborhood of keeping Oxford Street a dead-end. Also, we’ll look at the new Bayside Anchor affordable housing by Kaplan-Thompson Architects of Portland.

In September’s issue we’ll look at some tentative conclusions and suggestions based on how past planning and development ideas have panned out in Bayside. What can be learned from the best and worst of what’s happened here in recent decades?

In conclusion, we’ll look at two small side streets off Cumberland Avenue, how they came to be overshadowed by larger events in the surrounding area, and what revitalization strategies could turn their blight into neighborhood inspiration.

Tony is an architectural designer and sign artist. He grew up in NYC, Hartford, and Worcester.  Tony has collected architectural salvage since his teens.  Later, he became concerned about urban decay and started advocating to save architectural landmarks in distressed neighborhoods. He has written several articles and books on related topics.