After a public hearing, the Finance Committee of the City Council shredded the Mayor’s minimum wage proposal before voting to pass the measure on to the full Council.

Councilors Jill Duson and Nick Mavadones steamed over Councilor Hinck to pass several amendments that radically changed the proposed ordinance. The Committee’s fourth member, Councilor Ed Suslovic, was out of the country.

The life of an ordinance

From the original draft phase, the ordinance goes before an appropriate Council Committee, such as the Finance Committee, where it is debated and tinkered with before coming before the full Council.

The process must include public hearings at the Committee and at the City Council before the vote to pass or reject the ordinance.

The minimum wage ordinance had a slightly different beginning, but the process is the same in the end.

Mayor Mike Brennan started pushing for an increased minimum wage in January 2014, during his State of the City address. The Mayor formed a group–like a task force, but without any City resources–made out of members of the public, businesses, and advocates. This group developed the roots of an ordinance after hearing from hundreds of residents, businesses, and experts in public forums.

After about a year of process, Mayor Brennan directed the City’s Attorney to draft the proposed ordinance that went before the Finance Committee.

“It’s easy to pack the room”

At least one Finance Committee member was not particularly happy to be dealing with the minimum wage issue. 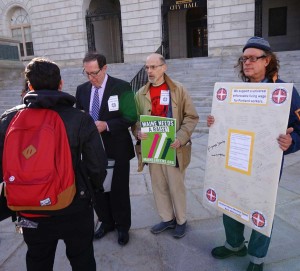 Living Wage supporters outside of City Hall before the Finance Committee hearing.

Councilor Mavadones went on to chide the public for expecting that their testimony at the public hearing was worthwhile.

“We’re being held back by the Congress’s inability to raise the minimum wage,” he said.

Councilor Hinck went on to discuss his history with the minimum wage, which he had not earned since the late ‘60s or early ‘70s. He said that the $2.50 per hour he earned back then, if raised with inflation, would be approximately what the Mayor’s proposal called for, about $10 per hour.

He went on to say that if the Federal minimum wage had increased at the same rate that higher income earners’ wages have increased, it would be much higher than $10 per hour.   He concluded that the Mayor’s proposal was “very modest.”

Councilors Nick Mavadones and Jill Duson both agreed that the minimum wage in Portland should be raised, but that a balance had to be struck between the needs of workers and the profits of businesses.

Councilors Mavadones and Duson went on to shred the Mayor’s proposal.

The Mayor wanted to get to $10.68 by 2017 after a series of three stepped raises. This was amended to $9.75 per hour by 2020, after a raise every two years. The clause to pin the minimum wage to the Consumer Price Index (a way to increase the minimum wage with inflation) was eliminated. Also, tipped employees and young work permit holders were excluded from increases in the City minimum wage.

The amended proposal will now go before the full City Council for more tweaking and a final vote.

Meanwhile, the Portland Green Independent Party is collecting signatures to put a $15/hour minimum wage referendum on the November ballot.