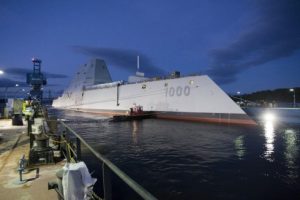 The USS Zumwalt, one of the many weapons of mass destruction built at General Dynamics-owned, Bath Iron Works, in Bath, Maine.

Years ago, back when the nation was still gripped in a post-9/11 atmosphere of “love-it-or-leave-it” enforced patriotism, my father was banned from a local Internet chat room, because he had the audacity to suggest that the real “weapons of mass destruction,” were those built at vaunted naval shipyard, Bath Iron Works.

I guess the proverbial apple did not fall far from the tree.

Indeed, by many estimates, the Pentagon does truly need most of the warships BIW and other naval shipyards throughout the country produce. Yet, at a time when working class Americans are told they must cut-back, and public health clinics are shut-down in the name of austerity, Maine politicians continue to shower BIW—which is owned by leading weapons manufacturer, General Dynamics—with government grants, subsidies, and tax-breaks so it can continue building instruments of war. (In 2012, BIW reported revenues of $31.5 billion, yet for years has paid little to no income taxes.)

As such, I actually greeted the news of BIW’s recent loss of a $10.5 billion Coast Guard contract, as a positive development.

BIW should view the loss of the contract—which was awarded to Eastern Shipbuilding of Panama City, Florida, a non-unionized shipyard—as an opportunity to redesign its business structure and perhaps finally get out of the WMD-crafting business, altogether. Instead of building outdated (and largely unnecessary) military warships which will only further the cause of U.S. empire and global hegemony, the naval shipyard could convert its resources to developing wind, solar, tidal, light rail and other environmentally sustainable energy systems.

Such urgently needed environmental innovations would not only help reduce our reliance on foreign oil (often the primary reason the U.S. goes to war, in the first place), they would also mitigate the looming climate crisis.

As longtime anti-war activist and progressive blogger, Bruce Gagnon remarked last year at a protest of BIW’s ceremonial unveiling of the USS Rafael Peralta, the money for BIW to make such a transition to clean energy development is sitting right in the military coffers.

“We need to stop using fossil fuels,” Gagnon said. “We need to convert the way we live, which means we need to use solar, and rail systems, and tidal power… But where’s the money to do that…? It’s inside that pot of gold called the Pentagon budget, eating up 56 cents of every discretionary federal tax dollar.”

Roughly 54 percent of our federal tax dollars go to the military, while a measly 6.28 percent goes to education. Even the capitalism apologists known as “Libertarians” seem to understand what a massive waste of taxpayer money this represents, (even if their presidential candidate, Gary Johnson, does not know what Aleppo is).

The U.S. is currently engaged in 135 military conflicts, most of which have not been officially declared by Congress or the president. Most of these so-called “dirty wars” involve drone strikes and aerial bombardments, rather than conventional ground forces. As such, these foreign policy excursions—which largely go unacknowledged by the “liberal” media—tend to be hidden from most Americans.

As investigative reporter, Jeremy Scahill writes in his latest book, The Assassination Complex: Inside the Government’s Secret Drone Warfare Program,

“[S]pecial forces and drones replaced the type of large-scale ground invasion that destroyed Iraq. But the defining essence of the Bush-Cheney template—that the United States is fighting an endless war against terror suspects who have no due process rights of any kind—is very much alive and, in many cases, stronger than ever.”

Yet, BIW is justified—and frequently praised by Maine lawmakers, Republicans and Democrats, alike—because it “creates jobs.”

Let’s set aside for a moment the fact that employers and bosses do not actually create anything—jobs or otherwise. Military-production is the worst way to “create jobs,” due to how capital intensive it is. Likewise, converting BIW to a green-energy facility would “double the number of jobs” at the shipyard, according to a study by the University of Massachusetts Amherst’s Economic department.

So, if it is job-creation Maine’s congressional delegates are interested in, they should start looking beyond WMD-manufacturing.

Fifteen years after the September 11, 2001 terrorist attacks, the U.S. remains entangled in an interminable, ill-defined “war on terror” which, perhaps by design, cannot be won. The Iraq War will go down in history as the United States’ worst foreign policy blunder, which directly paved the way for the formation of the Islamic State in Iraq and Syria (ISIS). Afghanistan, meanwhile, is now the longest-running war in U.S. history, with no immediate end in sight. And our drones continue to rain down daily terror on Yemen, Pakistan, Somalia, and Libya.

None of this has made us any safer as a nation. Like all great empires, we seem hellbent on sowing the seeds of our own destruction. Though widely misrepresented by the corporate-owned media, Rev. Jeremiah Wright was correct: “America’s chickens are coming home to roost.”

No successful form of socialism can ever flourish if the left does not recommit itself to confronting what Eisenhower presciently termed the “Military Industrial Complex.” Bernie Sanders chose to ignore issues of war and peace in favor of a largely domestic platform. Yet, when pressed by media elites about where he would “come up with the money” for universal health care and  free college education, he hemmed and hawed about a Wall Street tax … or something. He refused to consider the most obvious source of revenue: The bloated, wasteful military-spending budget. Those of us on the left cannot afford to make the same oversight.

Which is why BIW should view the loss of the Coast Guard contract as a blessing in disguise. Perhaps this will provide the shipyard’s operators with the impetus to finally change its business structure, convert the naval station to a green-energy facility, and finally get out of the war-machine manufacturing business for good.