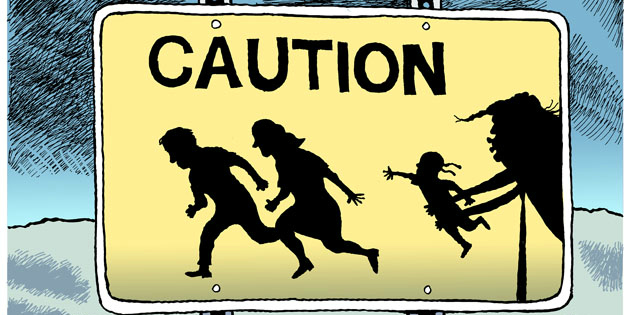 An editorial cartoon by Rob Rogers, formerly of the Pittsburgh-Post Gazette. Rogers, a long time editorial cartoonist for the paper, was fired recently for his work criticizing President Donald Trump.

My mother developed polio as a child. It left her paralyzed from the waist down. She is one of the few remaining polio survivors still alive.

She often reflects on how much more difficult it was to be a person with a disability in the 1950s, prior to any disability rights laws. Indeed, growing up with a physical handicap was like being a non-person. Teachers were openly cruel and belittling to her. One teacher once chastised her, in front of her classmates, for being a “burden” on taxpayers, who would, she assured my mother, end up having to pay for her living expenses. As a result, the teacher continued her berating lecture, my mom needn’t worry about studying hard and applying herself, academically, since “nobody would hire” her, anyway.

(I suspect many people, including employers, still harbor such views toward the disabled. They merely keep them to themselves. Unless, that is, they are Donald Trump or his ableist supporters.)

After contracting polio, my mother was taken to a rehab facility, where she lived for several months. She was only about 4-years-old, and the experience of being taken away from her parents and home was extremely traumatizing for her. The nurses were wicked to her and the other patients, openly mocking their disabilities. The facility was cold, dark, and antiseptic. My mom cried every night for her salad — a staple of her dinner routine back home.

My mom’s parents, based on the advice of the hospital staff, never called or visited her during her lengthy stay. My mother, for all she knew, had been abandoned — given up as so much defective trash. Indeed, my grandparents, in keeping with the discriminatory attitudes of the time, viewed their daughter’s disability as a source of family shame. My grandfather, in particular, never truly came to terms with it.

I relate my mother’s story because it is the only comparable one I know of to what immigrant families, torn apart by the Trump administration’s egregious, “zero tolerance” crackdown on border crossings, are currently experiencing.

Last week, ProPublica released audio of immigrant children and infants held in a detention center at the border, crying for their parents. As the children scream, “Mami! Papa!” a border patrol agent can be heard, sarcastically replying, in Spanish, “Well, we have an orchestra here. What’s missing is a conductor.”

According to a story by The Intercept’s Ryan Devereaux, the Trump administration has taken more than 3,700 children from their parents, thus far. And, as the headline states, the government has “no plan for returning them.”

A June 19 editorial in Socialist Worker calls the makeshift “desert tent cities,” and “Walmart concentration camps for children,” a “deliberate spectacle of sadism — a moral and humanitarian crisis knowingly orchestrated by Trump and Attorney General Jeff Sessions to inflict suffering on migrant parents and children…”

Earlier this week, it seemed activists had scored something of a minor victory, with Trump’s abrupt issuing of an executive order mandating immigrant families remain together throughout the detention process. Trump clearly caved to the mounting pressure coming not just from immigrant rights’ activists, but also a newly-emboldened media, and, according to some sources, members of his own family.

However, even this symbolic victory was short-lived. In a pattern that has become all too familiar in this disorganized administration, Trump’s hastily signed executive order was met with confusion on the part of Immigration and Customs Enforcement (ICE) officials, as well as members of the president’s own cabinet who, apparently, had not been briefed about the order.

Many of these immigrants are asylum-seekers fleeing violence and civil unrest in war-torn countries like Syria, Iraq, Yemen, and Somalia. These families are desperate victims of U.S. imperialism — which, contrary to liberal opinion, increased under President Barack Obama. To bomb these people’s neighborhoods, and destabilize their countries through military force, and then sanctimoniously lecture them about their disregard for “the law,” as they attempt to flee the criminal violence we have inflicted upon them is a particularly pernicious form of hypocrisy.

In fact, to deny asylum-seekers entrance into the country is a violation of the Immigration and Nationality Act.

Furthermore, capitalists, corporate CEOs, Wall Street traders, and small business owners routinely engage in criminal behavior and justify it as merely the “cost of doing business.” They violate labor and regulatory laws, environmental protections, and commit tax evasion. Based on the right’s apparent reverence for The Law, these criminal capitalists should all be thrown out of the country. Let’s start with Trump.

“The goal of the Trump administration’s state-sponsored kidnapping is to scare potential future migrants and refugees from making the journey,” the Socialist Worker editors write, “as well as to create leverage on congressional Democrats to concede to White House demands for draconian policies against future immigration, legal and illegal.

But the cruelty of the family separation policy isn’t just as a means to these ends. Cruelty itself is the goal — another lurch in the Trumpist project of shifting the mainstream political spectrum so far to the right, that fascism, or something close to it, defines one end, while the other is the tepid liberalism put forward by the Democratic Party and MSNBC.

Yet, as the editorial argues, we cannot wait until the November midterm elections to take action against Trump’s family separations and deportations. Immigrant families certainly cannot wait. The left must mobilize against Trump now.

And, while Trump and his cabinet of swamp monsters certainly make for easy targets, it is important to understand that the United States’ anti-immigrant laws and history of scapegoating “The Other,” have been a bipartisan project for decades. As xenophobic as Trump has been toward immigrants, Obama still holds the dubious distinction of having deported more immigrants than any other president in history.

Thus, when it comes to challenging Trump’s xenophobia, the left’s goal cannot be to simply return to the “status quo,” or the way things were under the previous administration. The entire capitalist system — not just the policies of one or two particular presidents — is to blame. It must be smashed and replaced with one that recognizes the intrinsic value of all people — regardless of their nationality, gender, race, or physical ability.

Socialists ultimately believe in a world without borders, walls, and barriers. We believe no human being is “illegal.” People should be free to live and roam where they please — or perhaps more accurately for a warming planet increasingly characterized by droughts, floods, famines, and forest fires, wherever is most habitable. Indeed, climate change is already playing a role in mass migration throughout the globe, as island and coastal nations find themselves at risk to rising sea levels.

Ripping mothers apart from their children and throwing them in concentration camp surroundings is a cruel, heartless, and inhumane form of punishment. Our short-term goal must be the immediate reunification of families. The longer term project, however, is to create a world without borders — a world where no human being is illegal.