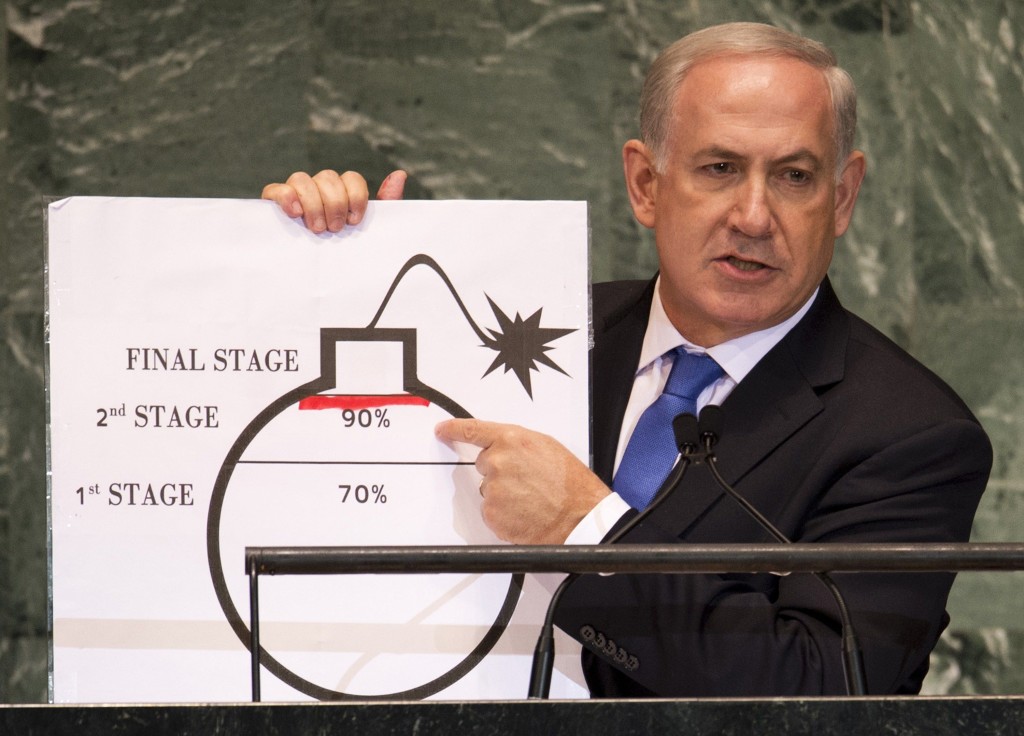 The much debated Iran nuclear deal is such an absurd bit of kabuki theater, it calls to mind one of my favorite scenes from Alice’s Adventures in Wonderland, when Alice joins the Mad Hatter and the March Hare at the Mad Tea Party.

‘Have some wine,’ the March Hare said in an encouraging tone.

Alice looked all round the table, but there was nothing on it but tea. ‘I don’t see any wine,’ she remarked.

‘There isn’t any,’ said the March Hare.

The absurdity in this case being the fact–conveniently overlooked by virtually all of the mainstream news media–that Iran has no nuclear weapons program. According to a CIA report published in 2007, and reaffirmed in a 2010 National Intelligence Estimate, Iran abandoned its nuclear weapons program in 2003, and there is no evidence to suggest it has resumed it.

Likewise, Iran is a member of the International Atomic Energy Agency (IAEA), and is a signatory to the 1968 Nuclear Non-Proliferation Treaty. (Israel, meanwhile, remains one of four holdout nations that has never signed on to the NPT.) And President Barack Obama has publicly conceded Iran is not a nuclear threat. During a major speech on nuclear disarmament in Prague on April 5, 2009 Obama said, “Iran has yet to build a nuclear weapon.”

Yet, if one is to take the U.S. corporate media’s word, Iran possesses an imminent “existential threat” to the security of the Middle East– the catchall “Middle East,” widely understood to mean, specifically, Israel.

Israeli Prime Minister Benjamin Netanyahu, in one of his more pompously theatrical moments, held up a picture of a cartoon bomb, complete with a lit fuse, during a 2012 U.N. General Assembly speech in an attempt to illustrate “how far” Iran has “progressed” with its nuclear ambitions. The graphic indicated Iran had completed 70 percent of the uranium enrichment process. The speech ends with Netanyahu bloviating about drawing a “red line” at the 90 percent mark of the enrichment process.

Shortly after this now infamous (and slightly comical) speech, Netanyahu’s bogus claims were contradicted by his own Israeli secret service. Indeed, the prime minister has proven himself to be a notorious liar, who has long been agitating for an Israeli assault on Iran. Netanyahu, it is worth recalling, was a forceful and early advocate for the U.S. invasion of Iraq.

So, what is the Iran deal really about then…?

According to Socialist Worker reporter, Eric Ruder, it all boils down to strategic global hegemony. Who, in other words, will control the Middle East? Ruder, in an SW article from earlier this year (“Are the war makers offering a real peace?” 04/08/2015), observes:

“[T]he era in which the U.S., as the world’s only superpower, was able to exercise unchallenged hegemony over the Middle East is clearly over.”

The U.S. has exhausted itself fighting a series of wars that it has lost or at least not won, from Afghanistan to Iraq and Libya. It has been unable to oust Syrian dictator Bashar al-Assad. And now, after ISIS emerged out of the catastrophe of the U.S. occupation as a full-blown military power, the U.S. finds itself unable to wage another ground war, so the Obama administration must rely on proxies, allies and–in the case of Iran–even rivals to wage its wars for it.

While the U.S. media routinely demonizes Iran, painting the country as an America-hating rogue nation bent on Israel’s destruction, it is actually Israel and the United States that have acted as the real aggressors toward Iran.

Indeed, the U.S. has been engaged in covert, Cold War-style hostilities with Iran since 1953 when Washington deposed democratically elected Prime Minister Mohammed Mosaddegh in a coup d’etat. Mosaddegh had called for the nationalization of the British Anglo-Iranian Oil Company– the early incarnate of what we today know as BP. Iran has the world’s fourth largest oil reserves.

According to Professor Noam Chomsky in a recent speech at The New School in New York, respondents to an international Gallup poll asking which country poses the “greatest threat to world peace” were unequivocal in their answer: The United States. One had to go farther down the list to find Iran, which garnered a mere five percent of the vote.

“What actually is the threat posed by Iran?” Chomsky asks in his speech.

Plainly, it’s not a military threat. That’s obvious. We can put aside the fevered pronouncements about Iranian aggression, support for terror, seeking hegemony over the region by force or the still more outlandish notion that even if Iran had a bomb, it might use it, therefore suffering instant obliteration.

… For the two rogue states that rampage freely in the region–the United States and Israel–any [military] deterrent is, of course, unacceptable. And for those who are accustomed to take for granted their right to rule by force, that concern is easily escalated to what’s called an “existential threat.” The threat of deterrence is very severe, if you expect to resort to force unilaterally at will to achieve your goals, as the U.S. and…Israel do commonly.

The irony of all this is that Israel actually does possess nuclear weapons– an entire arsenal of them, in fact. According to an in depth story in the Guardian from last year, (“The truth about Israel’s secret nuclear arsenal,” 01/15/2014) Israel is believed to possess at least 80 nuclear warheads, which “puts it on par with India and Pakistan.” Yet, Israeli government officials refuse to acknowledge the weapons’ existence, and Washington and the obsequious U.S. media have largely followed suit.

Anyone else getting a strong sense of deju vu, here? A “rogue” Middle Eastern country with “weapons of mass destruction,” hellbent on unleashing Islamic fundamentalist terrorism upon the West? The parallels to the Iraq war are impossible to overlook. Welcome to the era of endless, unjustified war.

As Alice remarks, “Why, sometimes I’ve believed as many as six impossible things before breakfast.”