We have an ambivalent relationship with change. While we enjoy novelty and innovation, and are easily bored, we also are creatures of habit and routine. We’re secure with the known and may resist, or even fear, the unknown. These feelings attach themselves to anything from the trivial (what brand of mayonnaise do you prefer?) to the profound (how about that Protestant Reformation?). The current trend of gentrifying Portland is definitely causing many to resist. 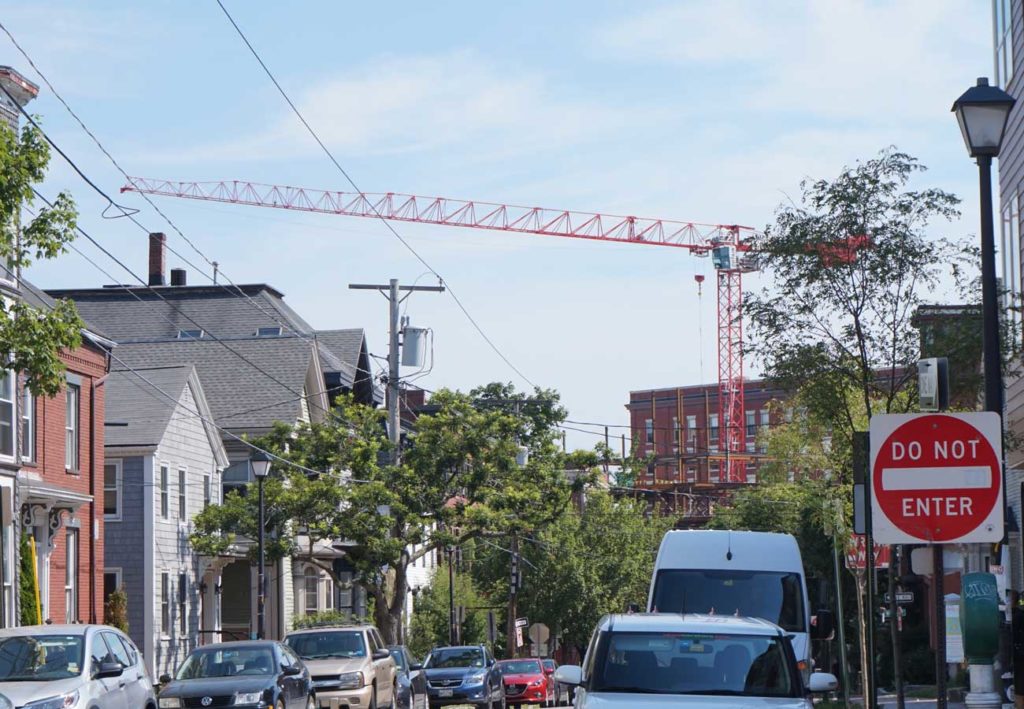 A sign of gentrification? A huge crane towers over the West End as new apartments are built at the site of Joe’s Smoke Shop.

Change happens. Products are discontinued, a torchbearer arrives, an insidious malady creeps across the land. We react with an enthusiastic embrace, a ho-hum shrugging of shoulders, a panicked backlash or a violent retaliation. Eventually we adjust, accommodate, obsolesce or evanesce. In the process, however, our individual and collective reactions to these changes often get us into more trouble and definitely exacerbate many of the challenges we face as life happens. Witness much of the debate that’s occurring about the evolution of Portland.

While no one was looking, the employment opportunities have shifted. People who headed for the suburbs are now wanting back into the city. In many ways and for many reasons cars have lost their cachet and shanks’ mare is hip again. The ways we learn about what’s happening in the world and next door are different. Where we shop and what we buy and how we pay for it have been turned upside down with amazing rapidity.  Then we wake up one morning and don’t recognize our community.

Largely, this is because these waves of ‘progress’ have not been equitable. For some they’ve come as a pleasant gentle lapping at the shore. For others they’re a tide that’s lifted all boats. For way too many, the ripples have swelled to a tsunami of devastation and heartbreaking, soul-killing loss.

Portland definitely isn’t what it was in the 80s, the 60s or the 40s. Whether that’s bad or good depends on each individual’s perspective. We could analyze the job markets, the housing stock, the transportation infrastructure, the demographics and the politics from now until the cows come home. We’d come up with a multidimensional model of what life in Portland has been like through time.

Although that would be a fascinating project, it would not reveal something that I have definitely felt changing over the past 10-15 years. That is the method and manner by which many of us approach and treat each other.

There’s not a lot of exchange of views. Rather we’re monologue-ing each other to death. We use our interlocutor’s turn to speak, not as an opportunity to learn and understand where they’re coming from and what their concerns and ideas are, but as an opportunity to think about what we’ll say next —which is generally a louder, more emphatic version of what we’ve already said.

“Wear ‘em down with repetition, resort to name-calling and one-liners and you can have your own way,” has become the motto of the current era.

It’s time to go back to, “If you can’t say something nice, don’t say anything at all,” don’t you think?

You can read “The ‘G’ Word Part 1” on gentrifying Portland at thewestendnews.com/g-word-part-1.